America Keeps Lethal Nukes All Over Europe for No Good Reason 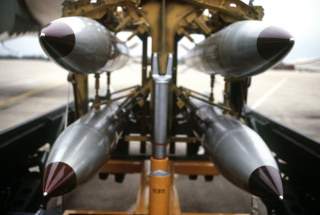 That the United States briefly lost access to the Incirlik Air Base was almost a footnote in the glut of news about the recent military coup attempt in Turkey. And what attention the incident did get was focused on the immediate implication: Incirlik is central to the United States’ anti–Islamic State air campaigns, and those dependent on the base were forced to come to an immediate halt.

Now, as the Erdoğan government consolidates its restored authority, Incirlik is open to America once again, though as of this writing it reportedly remains without power. With the help of generators, U.S. operations on the base are back in action. All’s well that ends well, right?

Not quite. As Eric Schlosser details in a must-read report in the New Yorker, it wasn’t only anti-ISIS efforts that were imperiled by that loss of access. Incirlik is also home to around fifty American-made B-61 hydrogen bombs—roughly a quarter of the nukes of NATO—each one capable of producing a boom up to eleven times more powerful than the bomb dropped on Hiroshima.

Sure, they’re stored in a secure underground vault. Sure, they’re equipped with switches known as Permissive Action Links (PALs), designed to prevent a bomb from detonating if the user doesn’t enter the correct code. Sure, there are significantly fewer American-supplied nukes distributed among NATO members than there used to be, thanks to stockpile cuts made by both Presidents Bush.

But it doesn’t take a lot of H-bombs to wreak a lot of havoc. As Schlosser notes, PALs can be bypassed with the right skills. And though there are obviously generators galore at Incirlik, loss of base power plus a significantly below-average U.S. troop presence don’t exactly make those vaults more secure.

Incirlik is hardly the only foreign base at which American nuclear weapons are stored. On top of the fifty or so there, about 130 additional B-61s are placed with Belgium, Germany, Italy and the Netherlands. At some of those locations, security is hardly tight. At the Kleine Brogel Air Base in Belgium, for instance, you can watch video on YouTube of antinuke activists climbing onto the property with nothing more high-tech than a rug to cover some fence spikes. They get to the building where twenty nuclear weapons are located, put stickers everywhere and are eventually confronted by a single soldier with an unloaded gun.

Now, the good news is that these nuclear stockpiles have typically not been a target of terrorist plots. Even in an extraordinary situation like we saw at Incirlik last week, stealing or otherwise compromising one of these weapons caches wouldn’t be easy. Yet the fact that they have not proven a significant vulnerability to date hardly means we should maintain this arrangement.

Indeed, what makes the whole scenario puzzling is how little defense value the United States gains from having H-bombs strewn about Europe. The theory is that having these bombs so close to Russia will act as a deterrent to aggression, but that Cold War–era idea is increasingly little more than an outdated relic on both political and technological grounds.

Since “missiles carrying nuclear warheads reach targets much faster, more reliably, and with much greater accuracy,” as Schlosser says, were the United States to actually employ its nuclear stockpile, we almost certainly wouldn’t select one of these farm-team bombs. This is something Moscow unquestionably realizes, which means it is not those 180 bombs that restrain the Russian bear. And anyway, in an era when we overwhelmingly face nonstate adversaries, using a weapon as indiscriminate and inhumane as a nuclear bomb becomes ever more difficult to justify.

All this adds up to suggest that placing this excess of H-bombs with internally volatile NATO allies has at best a neutral impact on U.S. security. More likely it is an unnecessary and expensive risk borne out of an antiquated mindset which no longer reflects the world in which we live. Bringing our troops home from Europe might not yet be on the horizon, but bringing our bombs home should be.

Bonnie Kristian is a fellow at Defense Priorities. She is weekend editor at The Week and a columnist at Rare, and her writing has also appeared at Time, Relevant, and The American Conservative, among other outlets.