America Must Stay Out of Syria's War 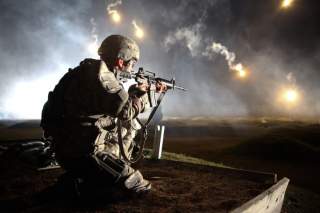 A group of State Department officials recently sent a confidential cable chiding the administration for not adding another war to America’s very full agenda. The fifty-one diplomats called for “targeted military strikes” against the Syrian government and greater support for “moderate” forces fighting the regime.

One of the architects of current policy, presumptive Democratic presidential nominee Hillary Clinton, also has turned against the administration’s more disengaged approach. She urged creation of a no-fly zone, an act of war, as well as greater support for insurgents.

The conflict is horrid, but no one has explained how U.S. entry into Syria’s multisided civil war would end the murder and mayhem. Nor has anyone shown how America making another Middle Eastern conflict its own would serve American interests.

Washington policymakers seem addicted to intervention and war, unable to imagine there is any international problem they cannot solve. In fact, such an admission would be seen as almost obscene in Washington culture.

Despite the repeated failure of social engineering at home, leading officials believe that they can transcend culture, history, religion, ethnicity, geography and more in order to forcibly transform other peoples and nations. Those who resist liberal interventionism’s tender mercies via bombs, drones, infantry and special operation forces are assumed to deserve their fate.

It has become a dangerous bipartisan vision. There are occasional outliers like Rand Paul. However, there is little apparent difference between neoconservatives like Sens. Marco Rubio, John McCain and Lindsey Graham and liberal interventionists such as Secretary Kerry and President Obama.

This interventionist impulse turned out disastrously in Libya and Iraq. Outside involvement is particularly inappropriate for a devilishly complex conflict like Syria.

The war hawks contend that if the United States had acted, in some theoretical yet farsighted fashion, there would have been no vacuum to be filled by the Islamic State. The “moderate” rebels would have triumphed, and members of all factions would have joined to sing “Kumbaya” while creating a democratic, peaceful and liberal future for Syria.

Washington seemingly enjoyed full control in Iraq the United States still made mistake after mistake, fomenting the sectarian conflict spawning the Islamic State. It's not a matter of having better bureaucrats or finding the right person to prop up in a foreign country. Rather, outside forces can't safely serve as a catalyst for change—it must be authentic and it must come from within. Regime change, nation building and social engineering don't work.

Military action would be even more dangerous today given Russia’s involvement. Americans have a humanitarian interest in ending the conflict, with no effective way to do so. Washington has no comparable security interest in Syria warranting military confrontation with Moscow.

Syria matters much more to Russia, which has a long relationship with Damascus, enjoys access to the Mediterranean from a Syrian base and has only limited influence elsewhere in the region. No-fly proponents blithely assume that Moscow would yield to U.S. dictates, but America would not surrender if the situation were reversed. A no-fly zone would not bring peace to Syria but would risk a military incident with a nuclear-armed power.

The State Department dissenters argued for limited strikes on Syria in service of diplomacy, a position so ironic it could only come from Washington. Nevertheless, what if such attacks failed? Have we considered the unintended consequences?

In fact, no one has a realistic scheme to put the Syrian humpty-dumpty back together again. America’s allies, like Saudi Arabia, are no more interested than Russia and Iran in democracy.

Ousting Assad would effectively clear the way for the Islamic State and other radical factions. So far supporting so-called moderate insurgents has done little more than end up indirectly supplying ISIS and Al Nusra, an Al Qaeda affiliate, with recruits and weapons. Turkey is at war with the same Kurdish fighters that America supports.

While horror is the appropriate reaction to Syria’s civil war, the United States has no solution to offer. No doubt, the conflict is destabilizing—but expanding the conflict would be so as well. Indeed, events in Iraq and Libya, both triggered by maladroit Washington military intervention, also are destabilizing.

The United States should adopt a policy of first do no harm. Stay out of the conflict. Don’t add to the tragedy. Accept refugees fleeing for their lives. Provide humanitarian aid to those within reach. That would be an agenda of which Americans could be proud.

Doug Bandow is a Senior Fellow at the Cato Institute and a former Special Assistant to President Ronald Reagan. He is a foreign-policy fellow and scholar with Defense Priorities.