America Needs to Rethink Who It Sells Arms To 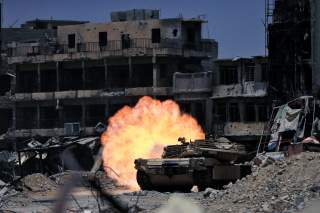 Ask anyone who served onboard U.S. naval vessels in the Persian Gulf in the late 1980s and early 1990s, and they’ll probably tell you that there wasn’t that much that frightened them. Truth be told, the countries in the region were no match for Uncle Sam. On April 18, 1988, for example, Operation Praying Mantis pitted nearly all of the ships in Iran’s navy—three of them, plus some speed boats—against a handful of American combatants, and aircraft from the carrier Enterprise. It wasn’t much of a fight. By the end of the day, two Iranian vessels were sunk, and a third was disabled.

But Iran’s Harpoon anti-ship missiles were no laughing matter. Before it was sent to Davy Jones’ Locker, the 265-ton gunboat Joshan managed to launch one of these ship-killers at the cruiser USS Wainwright. Thankfully, it missed. And how, you might ask, did the Iranians get such a state-of-the-art weapon? Uncle Sam sold the missiles, along with F-14s capable of carrying them, to the Shah. In 1979, these gems fell into the hands of the revolutionaries who overthrew the Shah—and who hated America in large measure because of our support for him.

During my brief foray in the region onboard USS Ticonderoga, in the fall of 1990, we practiced firefighting in gas masks in case Saddam Hussein used chemical weapons against the U.S. fleet.  Saddam created the chemical weapons with American help when he was fighting the Iranians in the 1980s.

U.S. troops in Somalia in 1993 had to contend with an environment rife with sophisticated equipment, including surface-to-air missiles, towed guns, tanks, and armored personnel carriers, sold to the dictator Mohammed Siyad Barre. When warring factions toppled Barre in 1991, they turned these weapons on each other—dragging the country into a vicious civil war, from which it has yet to recover.

And in 2014, fighters from the Islamic State retrieved the weapons sold to the post-Saddam Iraqi army, including Humvees and tanks, as well as a vast volume of small arms and ammunition. In just one month, June 2014, ISIS captured “vehicles, weapons and ammunition sufficient to arm and equip more than three Iraqi conventional army divisions,” or up to 50,000 soldiers, according to a UN Security Council study (quoted here). With these weapons in hand, ISIS fighters swept across vast swathes of territory, terrorizing Iraqis, Syrians, Kurds, Yazidis and countless others unfortunate enough to be caught in their path.

As Gene Healy quipped at the time:

We've spent $25 billion . . . building up the Iraqi security forces, only to get an updated version of the old gibe about the South Vietnamese Army: “want to buy some ISF rifles? Never been fired and only dropped once!”

In other words, this isn’t a new problem.

A just-released Cato paper by my colleagues Trevor Thrall and Caroline Dorminey suggests that we revisit foreign arms sales. Per the Arms Export Control Act (AECA), all such sales are supposed to be subject to vigorous review and risk assessment. However, the fact that the United States sells to many countries—including obviously fragile, tyrannical, and dangerous ones—suggests “that the risk assessment process is rigged not to find risk.”

Thrall and Dorminey set out to fix that. Applying an elegant but simple risk assessment based on five key metrics—stability (from the Fragile States Index); Freedom House’s Freedom in the World rankings; the State Department’s Political Terror Scale; the Global Terrorism Index; and the UCDP/PRIO Armed Conflict Dataset—they find that “there are a large number of risky customers in the world, and the United States sells weapons to most of them.” Libya, Iraq, Yemen, the Democratic Republic of Congo and Sudan “scored as high risk on all five measures,” yet “purchased an average of $1.8 billion in U.S. weapons since 9/11.” Thrall and Dorminey conclude, “the policy of the United States is to sell weapons to just about any nation that can afford them without much concern for the consequences.”

They suggest a different approach. “The United States,” they write, “should reorient its arms sales policy to ensure that sales provide strategic benefits and to avoid producing negative unintended consequences.” At a minimum, “the arms sales process should . . . be revised in order to ensure that all sales receive more thorough scrutiny than has been the case to date.”

Seems reasonable to me.