America Needs to Stop Confusing Its Allies' Interests for Its Own 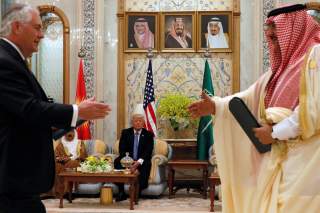 The essay below, by Matthew Petti of Columbia University, was a runner-up in the contest.

American influence on the rest of the world is not a two-way street. Just as Newton's Third Law posits that every action has an equal and opposite reaction, every expansion of U.S. power in the rest of the world gives foreign powers both the means and incentive to build influence in Washington. It is neither surprising nor unreasonable for governments and international organizations to advocate for their interests in the capital of the most powerful state on earth. However, the United States should not mistake these interests for its own. Attempts to maintain an imperial presence around the entire world have dragged the country into self-destructive actions at the behest of its allies, and American disengagement from local conflicts would free the U.S. from its allies' prejudiced understanding of those conflicts. American patronage of Saudi Arabia’s policies in its near abroad provides a valuable case study of allied nations’ sometimes detrimental effect on U.S. foreign policy.

Saudi Arabia portrays itself as the leader of a moderate Sunni Muslim bloc against Iranian expansion and Islamic extremism. This view is not necessarily grounded in reality, as a radically anti-Shia ideology causes the Saudi regime to see Iranian conspiracies behind every rock, whether or not Iran is actually involved. Nor is its claim to leadership unanimously accepted by Sunni Muslims, as the Saudi dispute with Turkey and Qatar demonstrates. Finally, Saudi Arabia's support for militant Salafist ideologies calls into question its claims to moderation. Nevertheless, the Trump administration has bought into this sectarian worldview, promising a basket of favors to the Saudi regime, including a $110 billion arms deal, during Trump's first foreign visit.

The most destructive result of Saudi Arabia’s influence can be seen in its campaign in Yemen. The ironically-named Operation Restoring Hope has killed thousands of Yemenite civilians, bringing disease and famine to millions more. For all their insistence on intervening in Syria for moral ends, neoconservatives and liberal interventionists have been strangely silent about the humanitarian crisis in Yemen.

Beyond the immorality of its effects, the Saudi campaign is a political failure, as the anti-Saudi rebel government still controls the capital in Sanaa, as well as nine out of twenty-one provincial capitals. Even cities supposedly under the control of the Saudi-backed Hadi government are hotbeds of chaos and violence. This instability is bad for not only the innocent Yemenis living through a civil war but also the international economy, as more than 10 percent of global trade flows through the Red Sea basin on its way to or from the Suez Canal; ships traveling through the Straits of al-Mandab have come under fire from inside Yemen.

U.S. support has essentially shielded Saudi Arabia from the negative effects of its campaign, removing incentives the kingdom has to restrain its own actions. From the beginning of Saudi Arabia’s intervention in Yemen, the Obama administration supported the Saudi-led coalition with mid-air refueling and advanced munitions. This aid hasn’t quite made up for poor military leadership, but it has passed the mounting economic costs onto a foreign guarantor, allowing Saudi forces to maintain their technological edge despite a budget crisis in the kingdom. Consequently, American calls for a political solution have fallen on deaf ears; as the Trump administration considers removing some restrictions on support to the Saudi-led coalition, Riyadh will only be encouraged to pursue the disastrous status quo.

America is taking on consequences of the Saudi campaign other than the economic costs associated with a prolonged counterinsurgency near major trade routes. The extensive logistical support for the Saudi air force has put a “Made in the U.S.A.” sticker on the devastating bombing campaign and the consequent starvation of Yemen’s people. Given the extensive comeback Al Qaeda in the Arabian Peninsula (AQAP) has made during the civil war, an increase in anti-U.S. sentiment in Yemen could directly impact the American people by further encouraging support to anti-American terrorists. Saudi Arabia doesn’t seem to care very much about terrorism unless it can accuse a regional rival of supporting it, and this lackadaisical attitude can be seen in Yemen, where AQAP forces are allowed to openly operate alongside the Saudi-led coalition. While attempting to please a U.S. ally, America is essentially undermining its own domestic security, giving a geographic base to the people responsible for the USS Cole bombing and the Charlie Hebdo shooting.

Even if we accept Saudi Arabia’s claims about Iran’s ambition to build a “Shia crescent,” the war in Yemen actually undermines its own goals. The rebel government in Sanaa is a tenuous alliance between Abdullah Saleh, the Sunni ex-president of Yemen, and Abdulmalik Houthi, whose Zaydi faith is Shia but differs from the Twelver Shia prominent in Iran. In the beginning, this alliance was primarily concerned with increasing its constituents’ domestic power. (Even though President Mansur Hadi accused the Houthi movement of serving an “Iranian agenda,” allegations of foreign interference are a standard tactic of dictators to discredit domestic opposition, and there is evidence that Iran actually cautioned the rebels against seizing the capital.) However, the Saudi intervention on behalf of the Hadi government has regionalized the conflict, giving Sanaa every reason to back Iran’s goal of weakening Saudi power. With a “modest investment” of arms and personnel, Iran has managed to make close friends with Houthi and Saleh loyalists, an opportunity provided by the U.S.-backed, Saudi-led “anti-Iran” campaign! As policymakers in Washington increasingly sound the alarm over minuscule amounts of Iranian aid to Houthi fighters, they are giving Tehran both the means and motivation to step up its involvement in Yemen.

Just as American support for Saudi policies has created chaos and made enemies in Yemen, Saudi policies bankrolled by the United States may soon do the same in eastern Saudi Arabia and Bahrain. Shia communities in this area have long complained of social and economic discrimination, a complaint certainly supported by the hateful anti-Shia propaganda taught in Saudi public schools. When a peaceful revolution in 2011 swept through Bahrain, Saudi forces intervened to preserve the Sunni minority regime, which now imprisons thousands of dissidents, accusing even secular, liberal opposition groups of participating in Iranian-backed terrorism. This may be a self-fulfilling prophecy; whether or not Bahraini allegations of Iranian support for a recently-discovered militant cell are true, the escalation from a peaceful protest movement to an armed uprising is the direct result of heavy-handed security policies. Thanks to the aforementioned arms sales to Saudi Arabia, and U.S. military and diplomatic support to Bahrain, the United States is “now widely equated with the regime itself” by the Bahraini and eastern Saudi people. Given the oil reserves located along the Persian Gulf coast and the headquarters of the United States Fifth Fleet in Bahrain, this should be extremely concerning, especially if violence escalates to a Yemen-style civil war.

Accepting the sometimes delusional worldview of its allies will only lead to more American frustration in the Middle East. Vali Nasr of the Johns Hopkins School of Advanced International Studies estimates in The Shi’a Revival that about half of Muslims between Lebanon and Pakistan are Shia. However, the foremost U.S. allies in that region are Sunni monarchies. Consequently, the United States has adopted those regimes’ sectarian attitude that any Shia political organizing—even towards legitimate goals like communal defense or democratic aspirations—must have come from a nefarious Iranian plot, leading to heavy-handed, counterproductive U.S.-backed repression. Just as the United States took on the French cause in Vietnam, leading to an arguably avoidable and costly war, and the British cause in Iran, prompting an anti-American revolution two decades later, Washington is now allowing Saudi Arabia to write its policy to the detriment of the American people.

However, by adopting a more restrained approach, the United States can encourage its allies to adopt more sensible policies towards their neighbors. Threatening to remove U.S. backing can force countries to act more sensibly, as the 1956 Suez Crisis demonstrates. Washington refused to join the Anglo-French-Israeli invasion of Egypt to prevent the nationalization of the Suez Canal. Instead, President Dwight D. Eisenhower used financial and diplomatic pressure to force all parties to accept a UN peacekeeping force in the Sinai Peninsula, averting a potential land war between NATO and Soviet-backed powers.