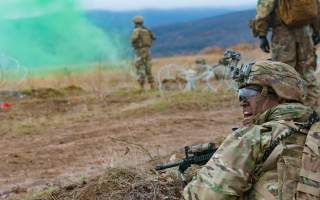 Inside democratic societies, shrewd and far-sighted defense strategies focused on modernizing armed forces for future wars are always difficult to achieve. Thus, when a modernization strategy succeeds as it did in 1991 with the Battle of 73 Easting, Americans should pay attention.

At 4:18 PM on 26 February 1991, the two lead cavalry troops of an 1,100-man Armored Cavalry Squadron consisting of Abrams tanks, Bradley infantry fighting vehicles and supporting artillery charged out of a sandstorm and attacked a full-strength 2,500-man Iraqi Republican Guard Brigade with T-72 tanks, BMPs and artillery in the Iraqi desert along the North-South grid line referred to as “73 Easting.” In the extreme violence that ensued, courageous and intelligent American soldiers applied a new, as yet untried combination of armor, mobility and firepower that crushed the Iraqi force.

By historical standards 73 Easting was an exceptional “first battle.” Most first battles from Bull Run and Kasserine Pass to the Ia Drang Valley ended badly. The Army’s senior leaders relearned the same bitter lesson: “Every successful business model, or military organization for combat, works until it doesn’t.”

The Battle of 73 Easting was different. The Armored Cavalry’s winning combination of organization, technology and human capital—the new, 1991 Army business model—was created in the mid-1970s, a time of draconian defense cuts when U.S. warplanes couldn’t fly for a lack of spare parts, ships sat in port without fuel and soldiers exercised with tanks and guns that differed little from their WWII predecessors. However, when the funding for Army modernization finally arrived in the 1980s, the really hard work—thinking, experimentation and evaluation—was accomplished. New fighting formations could be fielded.

Fortunately, the new national military strategy points the way: Air Force, Naval and Army Forces must move away from low intensity conflict operations in permissive environments. New forces must be built that can deter, and, if necessary defeat capable nation-state opponents in high intensity conventional conflict. The new strategy also discards the doctrine of brute force—blind faith in the superiority of numbers—in favor of lethality and capability, not numbers in future force design.

Unfortunately, inside the U.S. Army the flood of cash from congress—$192 billion with $37 billion for modernization—is replacing the brute force theory with a fatally flawed strategy: impetuous, undisciplined spending to make the old Army fight better. The Army’s senior leaders are spending $27 billion of the Army fiscal 2019 modernization dollars on legacy systems; the contemporary equivalent of upgrading Sherman Tanks in the 1980s for war in 1991.

Put differently, the money has arrived as it did during the 1980s, but in contrast to the Army’s senior leaders in the 1970s, today’s senior leaders have not done the hard work to construct the new business model:

- Identify the form that future warfare will take and the new warfighting missions that joint operations to deter, neutralize or destroy new threats will demand;

- Perform the analysis to link the national strategy with operational concepts and desired capabilities;

- Build the new command and control structure to integrate capabilities across service lines and guarantee unity of effort;

During the 1970s, the politicians who were nominally in charge of overseeing the U.S. Army’s spending habits did not have to ask the Army’s senior leaders many hard questions. The officers who worked quietly in the background to build the new Army on the ruins of the force that fought in Vietnam knew their trade. Several fought in WWII, Korea and Vietnam.

The next “first battle” will be just as brutal as the Battle of 73 Easting, but it will be different. Winning it will require the methodical adaptation of men and machines inside new organizations for combat to achieve decisive victory in war.

Touting a collection of programs without an inherently joint warfighting organizational construct is not the way to modernize. Establishing a new headquarters with more generals from the same source that failed repeatedly to get the job done since 1991 is not an answer; it is obfuscation.

If the nation is to win the first battle of the next major war, then, the appointed and elected leaders of the executive and legislative branches must weigh in and ask the Army’s senior leaders the hard questions. They must be ready to reallocate resources to address the absence of a coherent and effective modernization strategy inside the U.S. Army before billions are lost.

Col. (ret) Douglas Macgregor was decorated for his leadership under fire in the 73 Easting. He is also a PhD and the author of five books. His most recent is Margin of Victory (Naval Institute Press, 2016).