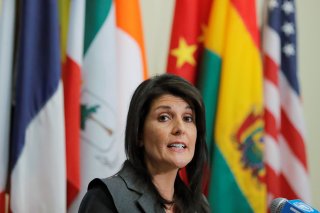 The sudden eruption of antigovernment demonstrations across Iran has generated both surprise and enthusiastic support among Americans who detest Ayatollah Ali Khamenei’s theocratic regime. The Trump administration has even brought the matter before the UN Security Council. Ambassador Nikki Haley’s comments conveyed the administration’s attitude. She stated that Iran is “on notice,” after highlighting some of the slogans that Iranian protesters chant. “The Iranian regime’s contempt for the rights of its people has been widely documented for many years,” said Haley, adding that the United States stood “unapologetically with those in Iran who seek freedom for themselves, prosperity for their families, and dignity for their nation. We will not be quiet.”

U.S. enthusiasm for the new developments inside Iran is understandable. Despite the modest changes that the reformist President Hassan Rouhani has implemented in recent years, the Iranian political system remains disturbingly autocratic and guilty of human-rights violations (although hardly on the scale of U.S. ally Saudi Arabia). Tehran’s international behavior has long been a thorn in Washington’s side on a multitude of issues throughout the Middle East and beyond. It is unsurprisingly that the United States’ leaders, media and probably much of the public would like to see the Iranian regime consigned to the ash heap of history.

Nevertheless, the expressions of solidarity that some U.S. officials and foreign-policy activists have voiced are ill advised. Washington’s close embrace easily could do more harm than good. There are two crucial reasons for greater reticence and caution. First, the political and ideological composition of the demonstrators is murky. Second, many Iranians, even those who have no love for Khamenei and his ilk, are suspicious of any indications that the United States is meddling, once again, in Iran’s internal political affairs. Given the history of Washington’s conduct, going back to the 1953 coup that overthrew a democratic government in Tehran, such distrust is logical. Given those factors, yellow lights should be flashing for the Trump administration to pursue a cautious, restrained strategy.

We simply don’t know a lot about the regime opponents who have taken to the streets. Based on statements and behavior, some demonstrators seem to be secular democrats. That certainly is the initial impression one gets of the woman who ripped off her hijab and stood proudly in Western-style garb, despite the predictable punishment for such an affront to the dress code that religious authorities enforce. But other marchers carried pictures of the leaders of the cultish, Marxist exile group the Mujahedeen Khalq (MEK). It would be folly to assume that a benign, much less secular and democratic, orientation is true of all, or even most, anti-regime marchers.

The United States has made that blunder far too often in other countries, embracing supposed democratic insurgencies that turned out to be flawed vessels for that value and, in some instances, its antithesis. Examples included support for the Nicaraguan Contras, Angola’s UNITA rebels, the Kosovo Liberation Army, the Iraqi National Congress and Ukraine’s Maidan demonstrators. In some of those cases, Washington’s sponsorship and aid even helped unleash unfavorable outcomes.

Some aspects of the Iranian unrest are sobering, even troubling. One powerful motive, perhaps even the dominant one, is pervasive dissatisfaction with the country’s languishing economy. That source of hostility to the government does not necessarily translate into broader political disgust—much less disgust that embodies a liberal, anticlerical agenda. Another disturbing feature is that decidedly illiberal elements seem to be backing the demonstrators. They include the MEK, as well as hard-line Islamist former president Mahmoud Ahmadinejad. Neither cheerleader has ever shown much affinity for Western-style liberal values. Their involvement should raise questions about, if not taint, the protesters’ cause.

Even if most of the antigovernment activists turn out to be secular democrats, the United States should avoid offering a tight embrace. Excessive praise could easily prove suffocating for the cause of freedom. As noted, Washington has a well-deserved negative reputation among Iranians across the political spectrum. The CIA, together with Britain’s intelligence agency, orchestrated the 1953 coup that restored the tyrannical shah to power for a quarter century. Iranians have not forgotten that episode. Nor have they forgotten Washington’s unsubtle support for Saddam Hussein’s bloody war of aggression against their country in the 1980s—a conflict that killed hundreds of thousands of Iranians.

Given that background, the beleaguered clerical regime will likely try to portray critics as U.S. puppets and stooges. If prominent Americans express vocal support for the protesters, it makes that task all that much easier. A U.S. endorsement could be (in some cases quite literally) the kiss of death for anti-regime activists.

This situation cries out for a cautious, even aloof, U.S. posture. If the demonstrations truly herald the emergence of a secular, democratic Iran, that outcome would be most welcome. But we don’t have enough information to know what a postclerical regime would look like, even if the protests lead to fundamental political change. And the last thing our leaders should do is reduce the chances of an optimal outcome by engaging in a clumsy, suffocating effort to “help” dissidents. For once, let the restless people of another country confronting a repressive regime work out their political destiny in their own way without U.S. interference.