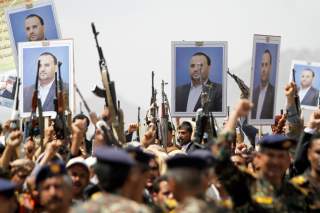 The U.S. is at war in Yemen. Special Forces are on the ground in Saudi Arabia assisting the oil giant against its impoverished neighbor. Washington also is providing Riyadh’s military with munitions, targeting assistance, and aerial refueling. All to bomb a nation whose people have done nothing against Americans.

Although President Donald Trump once criticized the Saudi royals for trying to “control U.S. politicians with daddy’s money,” he has continued to support Saudi Arabia’s war efforts. Congress has too, with the Senate recently voting 55 to 44 against taking up a measure to decide whether America should involved in Yemen. At least the vote was closer than last year, when the Senate refused to block a sale of precision-guided missiles to Saudi Arabia.

Secretary of Defense Jim Mattis urged the Saudis to “accelerate” the peace process, but they have not listened. The Saudi Crown Prince Mohammad bin Salman (MbS), who is a supposed reformer, continues to jail his critics and apparently wants only the peace of the grave for his Yemeni victims. Already most of his foreign initiatives—involving Syria, Qatar, and Lebanon—have misfired disastrously. So far, Yemen is his most consequential blunder.

The Obama administration backed MbS’ Yemen gambit in a futile attempt to assuage Saudi concerns over the Iranian nuclear deal, now abandoned by the Trump administration. CENTCOM Commander Gen. Joseph Votel claimed that “We’re not parties to this conflict,” but the Yemeni people, dying from bombs provided by Americans dropped by planes supplied and refueled by Americans and guided to their targets by Americans would disagree.

Gen. Votel then used ignorance as a defense, testifying to the Armed Services Committee that “we do not” know what happens after providing our assistance. Robert Karem, Assistant Secretary of Defense for International Security Affairs, confirmed that the U.S. does not “monitor their aircraft.”

In reality, America is an accomplice to Saudi aggression with horrific consequences for the Yemeni people. Perry Cammack of the Carnegie Endowment observed: “By catering to Saudi Arabia in Yemen, the United States has empowered Al-Qaeda in the Arabian Peninsula (AQAP), strengthened Iranian influence in Yemen, undermined Saudi security, brought Yemen closer to the brink of collapse, and visited more death, destruction, and displacement on the Yemeni population.”

Yemen sits at the southern tip of the Arabian Peninsula and has a long history of being dominated by Saudi Arabia as far back as 1934. When Yemen became independent in the 1960s, it was emerged as two independent and fractured states. Over the decades they fought each other and experienced domestic conflict intermittently, often finding their wars exacerbated by foreign intervention, including by Saudi Arabia. The two Yemens eventually united in 1990, but conflict continued with internal secessionists and outside meddlers.

For years President Ali Abdullah Saleh sat atop Yemen’s political volcano. He worked with both Saudi Arabia and the U.S. to maintain control and counted among his enemies the Houthis. That group was a militia that is as much tribal as political or religious. Also known as Ansar Allah (“Supporters of God”), the Houthis are Zaydis, a moderate, Shia-related sect that also shares some characteristics with Sunnis. They battled Saleh’s government through at least six separate conflicts. In addition, as Gregory Gause at Texas A&M observed, “The Houthis wanted to be affiliated with the Iranians much more than the Iranians wanted to be affiliated with them.” Later in 2009, Saleh gained and used Saudi support against the Houthis.

In 2012 Saleh was overthrown amid the backwash from the Arab Spring and succeeded by Abdrabbuh Mansur Hadi. However, Saleh was able to fight his way back into power thanks to help from the Houthis. In response, Saudi Arabia joined with the United Arab Emirates and several lesser “coalition” partners in March 2015 in an attempt to restore Hadi, who had fled to Riyadh. Saleh’s alliance with the Houthis would become troubled, eventually leading to a split and his assassination at their hands in 2017. It should be noted that throughout all of this, Iran had little to do with what went on. Rather, U.S. intelligence reported that Tehran counselled against the Houthis’ decision to take over the capital of Yemen.

Today a Yemeni nation and state no longer exist. As April Longley Alley of the International Crisis Group said, Yemen “has fragmented along historical divides, and you have various power centers.” Furthermore, a recent Chatham House report concluded that “Yemen resembles less a divided country than a collection of mini-states engaged in a complex intra-regional conflict.”

Worse still has been the impact on the Yemeni people. As of early 2018, the United Nations declared, “Yemenis are facing multiple crises, including armed conflict, displacement, risk of famine and the outbreaks of diseases, including cholera—creating the world’s worst humanitarian crisis.”

A year ago an estimated 10,000 civilians had been killed and another 40,000 had been wounded. A March update from the UN High Commissioner for Refugees reported: “Conflict in Yemen has left 22.2 million people, 75 percent of the population, in need of humanitarian assistance and has created a severe protection crisis in which millions face risks to their safety and are struggling to survive.”

More than a million cases of cholera have been reported, the largest recorded outbreak in history. A recent epidemic of diphtheria reached all but one of Yemen’s 23 governates. As many as 18 million people are food insecure and 14 million are at risk of starvation. Meritxell Relano, representing the UN’s Children’s Fund in Yemen, explained: “water and sanitation systems are collapsing. More than half of Yemen’s health facilities are out of service, cutting off nearly 15 million Yemenis from access to safe water and basic healthcare.” As if these woes weren’t enough, it is also estimated that three million people have been displaced.

Of course, Saudi Arabia’s MbS denied any blame. “It is very painful … and I hope that this militia ceases using the humanitarian situation to their advantage in order to draw sympathy from the international community. They block humanitarian aid in order to create famine and a humanitarian crisis.”

His claims are wrong and distorted. The Houthis have behaved badly, but the conduct of the coalition is far worse. Saudi airstrikes, described as “indiscriminate or disproportionate” by Human Rights Watch, have caused at least two thirds of infrastructure damage and three-quarters of casualties. Observed Yemeni-American Rabyaah Lthaibani: “For three years now, the Saudi Coalition has bombed hospitals, schools and wedding parties. They have systematically targeted roads and farms and blocked ports so lifesaving aid and other goods could not reach people facing famine and the world’s fastest-growing cholera outbreak.”

This would be outrageous under any circumstance, but attacks on civilians appear to be conscious strategy. A UN panel of experts recently charged that Riyadh was using starvation as a weapon of war. Most obvious is the blockade which, reported Human Rights Watch, “has severely restricted the flow of food, fuel, and medicine to civilians, in violation of international law.”

But the coalition’s crimes go much further. Matthew Reisener of the Center for the National Interest cited “mounting evidence that Saudi Arabia has deliberately targeted civilian infrastructure to manufacture a food insecurity crisis in Yemen’s Houthi-controlled areas. Hundreds of airstrikes have purposefully targeted farms, marketplaces and food-storage facilities, while over two hundred fishing ships have been destroyed in coalition bombings.”

A different kind of human horror also comes from the United Arab Emirates (UAE). Last June Human Rights Watch and Associated Press reported that Abu Dhabi and its local allies operated 18 secret prisons in Yemen’s south where prisoners were tortured. According to AP: “Hundreds of men swept up in the hunt for al-Qaeda militants have disappeared into a secret network of prisons in southern Yemen where abuses is routine and torture extreme.” In addition, American forces were reportedly stationed at some of those facilities, though U.S. officials denied involvement in human rights violations.

What could justify U.S. complicity in another state’s murderous war of aggression?

One of many poor arguments is one from the Heritage Foundation’s James Carafano, who argued that U.S. have to be involved, “to keep the region from falling apart,” because “the collapse of any friendly regime there is bad for us.”

The reality is that Washington has done far more to destroy Middle Eastern order than preserve it. The invasion of Iraq, bombing of Libya, and support for jihadist radicals in Syria boosted militarist and Islamist movements throughout the region and greatly enhanced Iran’s influence. Today, Saudi Arabia’s war against Yemen, and America’s assistance in that war, has continued this process.

Whether Hadi was nominally friendly toward America no longer matters. Since his ouster he allied with Islamist radicals and is no friend of democracy or human rights. Moreover, by calling in airstrikes on his own people Hadi lost whatever legitimacy he once possessed. By helping kill thousands of civilians in attempting to restore him to power, Washington ensured that much of the population will be unfriendly, whatever the character of the regime that emerges. One Yemeni described the destruction of his apartment by a Saudi airstrike to The New Yorker’s Nicolas Niarchos, angrily stating, “America is the main sponsor of all that is happening to us.”