America Should Step Back from the Taiwan Time Bomb 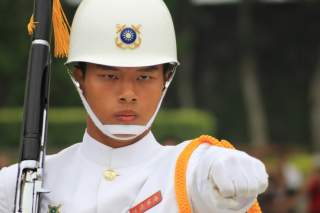 Tensions between Taiwan and Mainland China rose another notch on July 1 when the Republic of China Navy accidentally launched a missile in the Taiwan Strait toward Mainland China. The supersonic Hsiung-feng III (“Brave Wind”) antiship missile flew some forty-five miles before striking a Taiwanese fishing trawler, killing the skipper and injuring three crew members.

Beijing’s initial reaction was relatively restrained. Although Chinese authorities immediately demanded a “responsible explanation” for the mishap, they did not take steps to shamelessly exploit the situation for propaganda purposes. Later that day, though, a spokesman for the Taiwan Affairs Office of the State Council charged that the incident “caused severe impact at a time when the mainland has repeatedly emphasized development of peaceful cross-strait relations.”

More fundamentally, the accident was yet another step in the deterioration of relations between Beijing and Taipei since the election of Democratic Progressive Party president and legislature. Chinese leaders were unhappy about the victory of the DPP’s Tsai Ing-wen as Taiwan’s new president, even though she was not as strident in her advocacy of formal independence for the island as the last DPP president, Chen Shui-bian, had been.

Even before she took office in May, Beijing warned Tsai and her supporters that they must accept the so-called 1992 consensus that there was one China, however much the two sides might disagree about the specific definition of that concept. And that attitude has not softened in the slightest. Zhang Zhijun, the head of the Taiwan Affairs Office, put it bluntly to a visiting Taiwanese business delegation in late May. “There is no future in Taiwan independence, and this cannot become an option for Taiwan’s future. This is the conclusion of history.”  He added that “some people say you must pay attention to broad public opinion in Taiwan,” but he would have none of that reasoning. “Taiwan society ought to understand and attach great importance to the feelings of the 1.37 billion residents of the mainland.”

At first Tsai waffled, and then openly balked at accepting the 1992 consensus. Beijing’s irritation mounted quickly in response. In late June, barely a month after Tsai took office, China severed all liaison contacts between the Taiwan Affairs Office and its Taiwanese counterpart.

Rejecting the 1992 consensus was hardly Tsai’s only offense from Beijing’s standpoint. Allies of her administration have pushed Taiwan’s independent territorial claims in the South China Sea.  She had embarked on an extremely conciliatory policy toward China’s archstrategic adversary, Japan. And in early June, Taiwan for the first time held a commemorative ceremony for the victims of the 1989 Tiananmen Square massacre. That was an especially bold thumb in the eye of Beijing’s authorities. And to top matters off, Taiwan will be testing its new antimissile systems in the United States later this month.

As the last item indicates, the United States is far more than a mere spectator to these developments. America has a loosely-defined but nonetheless real obligation to defend Taiwan under the 1979 Taiwan Relations Act. Washington also continues to sell weapons systems to Taipei. Beijing has complained about both aspects of this relationship, but that seemed little more than an exercise in pro forma diplomatic protests during the eight years that the conciliatory Ma Ying-jeou and the Kuomintang party governed Taiwan.

That period of stability has clearly come to an end, and the United States needs to reconsider the wisdom of its security commitment to Taiwan. Impatience on the part of Beijing, rash action on the part of pro-independence Taiwanese, or just a bad accident could trigger a crisis with devastating consequences for the United States. The latest incident highlights the danger. Imagine if the fishing trawler the Taiwanese missile struck had been from the mainland rather than Taiwan. Imagine if it had been a Chinese naval vessel that was struck. One suspects that Beijing’s response would have been a lot less restrained.

The Taiwan Strait is a ticking time bomb. The Taiwanese people seem ever more determined to chart their own destiny distinct from the mainland. The mainland authorities are determined that reunification will take place at some point, and their patience is not inexhaustible. It’s hard to see how this turns out well, and unless the United States extricates itself from this increasingly dangerous commitment, it will be one of the casualties when the time bomb explodes.

Ted Galen Carpenter, a senior fellow at the Cato Institute and a contributing editor at the National Interest, is the author of ten books and more than 600 articles on international affairs.