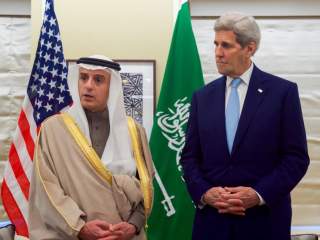 On Saturday, Secretary of State John Kerry traveled to Riyadh to reassure the Kingdom of Saudi Arabia and other Gulf states that the United States stood with them. “Nothing has changed” as a result of the nuclear pact with Iran, he insisted.

Washington’s long relationship with Riyadh was built on oil. There never was any nonsense about sharing values with the KSA, which operates as a slightly more civilized variant of the Islamic State. For instance, heads are chopped off, but only after a nominal trial. Women have no more rights, but can afford a better life.

The royals run a totalitarian system which prohibits political dissent, free speech, religious liberty and social autonomy. In its latest human rights report, the U.S. State Department devoted an astonishing 57 pages detailing the Saudi monarchy’s human rights abuses. To the extent that personal freedom exists, it is only in private. But even then the authorities may intervene at pleasure. Dore Gold, a former Israeli ambassador to the U.S., called the KSA “Hatred’s Kingdom.”

At a time of heavy U.S. dependence on foreign oil a little compromise in America’s principles might have seemed in order. Even then, of course, the KSA could not control the international oil market and the royals could not long survive if they did not sell their oil. They needed buyers as much if not more than buyers needed them.

Today, however, it’s hard to make a case that petroleum warrants Washington’s “special relationship” with Saudi Arabia. The global energy market is expanding; Iran has begun selling more oil; new sources such as tight oil have come on line; U.S. crude oil production is the highest it has been in decades. Most important, the royal regime cannot survive without oil revenues and has continued to pump even as prices have collapsed.

In recent years Washington has treated Riyadh as an integral component of a containment system against Iran. Of course, much of the “Tehran problem” was made in America: overthrowing Iranian democracy and empowering the Shah, a corrupt, repressive modernizer, led to his ouster and the creation of an Islamist state. Washington’s subsequent support for Iraq’s Saddam Hussein in his aggressive war against Iran only intensified the Islamist regime’s antagonism.

Fears multiplied as Tehran confronted its Sunni neighbors along with Israel and continued the Shah’s nuclear program. Overwrought nightmares of Islamic revolution throughout the region encouraged America’s fulsome embrace of the KSA and allied regimes, such as Bahrain, where a Shia majority is held captive by a Sunni monarch backed by the Saudi military. In Riyadh, Secretary Kerry declared America’s undiminished support for the world’s leading feudal kleptocracy.

But this argument for supporting the Saudi royals has become quite threadbare. The regime opposes Iran for its own reasons, not to aid America. And Saudi Arabia is well able to do so. In 2014, the country came in at world number four with $81 billion in military expenditures, a multiple of Iran’s total. Threats of subversion reflect internal weaknesses beyond Washington’s reach: the kingdom’s general repression and particular mistreatment of its Shia minority, including the recent execution of cleric Nimr al-Nimr, who urged nonviolent opposition to the monarchy.

Moreover, the nuclear agreement creates a real opportunity for change in Iran. The process will not be quick or easy, as is evident from determined resistance by more authoritarian regime forces. However hardline elements evidently feel threatened. In contrast to the KSA, there are (carefully circumscribed but real nonetheless) elections, political debate, religious diversity, generational resistance and liberal sentiments. Shifting the U.S. relationship with Iran could dramatically improve the region’s dynamic.

Whatever the alleged benefits of the Saudi alliance, America pays a high price. First is the cost of providing free bodyguards for the royals. For this reason the United States initiated the first Gulf War and left a garrison on Saudi soil. The inconclusive end of that conflict led to continual bombing of Iraq even during “peacetime” and ultimately the Iraq invasion. At the Saudis’ behest Washington backs their misbegotten war in Yemen and remains formally committed to the overthrow of Syrian president Bashar al-Assad, the strongest force opposing the far more dangerous Islamic State. (On his latest visit to Riyadh Secretary Kerry mentioned discussing “new ideas” with the royals to bring peace to Yemen. The KSA could accomplish that by simply halting the war.)

Saudi Arabia also tramples American values beyond its own borders. In next-door Bahrain, Riyadh helped suppress the majority Shia population and in more distant Egypt the Saudis subsidized renewed military rule. The KSA also has underwritten extremist Islamic teaching in madrassahs around the world (Sunnis account for roughly 85 percent of all Muslims). Even Iran never attempted to so effectively create an entire generation of extremists. Moreover, Saudi money backed Al Qaeda and Saudis were among the 9/11 attackers. Similar private support for extremist violence apparently continues. Yet Washington shields the kingdom’s practices from scrutiny, refusing to release the section of the 9/11 report discussing Saudi funding of terrorism.

Over the last few years Riyadh’s behavior has become more harmful to America’s interests. The monarchy has been pushing to oust Syria’s Assad without worrying about who or what would follow. To the contrary, Riyadh has subsidized and armed many of the most extreme opposition factions. Moreover, in Yemen Saudi Arabia turned a long-term insurgency into another sectarian conflict. In the process the royals have been committing war crimes and creating a humanitarian disaster.

By executing al-Nimr the KSA triggered sectarian protests in Bahrain, Iran, Iraq and Lebanon. Riyadh responded by breaking diplomatic relations with Iran, undermining political negotiations to resolve Syria’s civil war. Yet after all this Saudi Foreign Minister Adel al-Jubeir criticized “the mischief that Iran’s nefarious activities can do in the region.”

Of course, the fact that Riyadh is a destabilizing force does not mean that the United States should attempt regime change in Riyadh. America has proved that it isn’t very good at overseas social engineering—consider Afghanistan, Egypt, Haiti, Iraq, Kosovo, Libya, Somalia, Syria and elsewhere. But Washington should stop lavishing attention, praise, support and reassurance on the Saudi royals. Particularly important, the United States should disentangle itself militarily from the KSA, especially the latter’s misbegotten war in Yemen.

The two countries need a new, more normal relationship. Jubeir opined that “I don’t believe the United States is under any illusion as to what type of government Iran is.” Nor should Washington have any illusions about the nature of the Saudi regime. The two governments should work together when advantageous and disagree when appropriate. Sell weapons to Riyadh without committing to provide a royal bodyguard. Most important, Washington should feel no inhibition in attempting to forge a better relationship with Tehran. Balance should return to American policy in the Middle East.

Doug Bandow is a Senior Fellow at the Cato Institute. A former Special Assistant to President Ronald Reagan, he is author of Foreign Follies: America’s New Global Empire (Xulon).