Is America Standing On the Precipice of Another War? 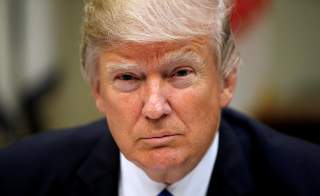 President Donald Trump has struggled in his first six months on the job. His signature legislative goals—from Obamacare repeal to the border wall—are stuck in Congress. He has managed to push through some initiatives via executive action, but these have been thwarted or delayed by the courts.

Desperate for a win, the president may be tempted to initiate a war. After all, Trump’s decision to launch missile strikes against Syria in April won him praise and support—even from some of his harshest critics.

There are a plethora of possible targets, including the ever-hated Iranians, and the latest Crazy Kim in North Korea, and no shortage of hawks in Washington urging President Trump to launch a preventive war.

The president would be wise to listen to other voices urging restraint. With respect to North Korea, for example, Joseph Collins reminds us that preventive war is akin to committing suicide for fear of death.

Another factor should weigh heavily on the president’s mind: the American people’s aversion to new wars—especially those that are likely to result in large numbers of Americans getting killed.

A recent paper finds that in the 2016 election, Donald Trump performed well in those communities that paid the heaviest price during America’s post–9/11 wars in Afghanistan and Iraq. Voters in these communities may even have provided the margin he needed to win the presidency.

“Trump’s ability to connect with voters in communities exhausted by more than fifteen years of war,” write Douglas Kriner and Francis Shen, “may have been critically important to his narrow election victory.”

“If Trump wants to win again in 2020, his electoral fate may well rest on the administration’s approach to the human costs of war. Trump should remain highly sensitive to American combat casualties.”

Kriner, a professor of political science at Boston University, and Shen, associate professor of law at the University of Minnesota, find “a significant and meaningful relationship between a community’s rate of military sacrifice and its support for Trump.” These sacrifices are unevenly distributed across the fifty states, and the “disparities are often even more extreme” when studied at the county level. Looking at casualty rates in the two wars, Kriner and Shen note that 50 percent of U.S. counties suffered one death or fewer for every one hundred thousand residents, but “10% of counties . . . suffered casualty rates of more than 7 deaths per 100,000 residents.” “Voters in such communities,” they explain, “increasingly abandoned Republican candidates in a series of elections in the 2000s.”

Trump defied Republican foreign-policy orthodoxy—and on the Iraq war especially—and was rewarded for it during the primaries. Feeling ignored by leaders in Washington, communities most affected by George W. Bush’s wars found Trump’s skepticism appealing. Many more gravitated to Trump in the general election against the hawkish Hillary Clinton. Even after controlling for other variables such as education levels and racial composition that might explain Trump’s success in these counties, Kriner and Shen find that “the relationship between a county’s casualty rate and Trump’s electoral performance remains positive and statistically significant. Trump significantly outperformed [Mitt] Romney in counties that shouldered a disproportionate share of the war burden in Iraq and Afghanistan.”

Kriner and Shen ponder whether public opinion will prove a stronger check on presidential warmaking than Congress and the courts. I’m skeptical.

“The significant inroads” they write, “that Trump made among constituencies exhausted by fifteen years of war—coupled with his razor thin electoral margin (which approached negative three million votes in the national popular vote tally)—should make Trump even more cautious in pursuing ground wars.”

Alas, “Trump” and “cautious” are two words that rarely go together. And not all U.S. wars are ground wars.

The human cost of war should factor into any president’s decision to start one. But Donald Trump’s limited understanding of modern warfare and international politics might convince him that he can pick a few cheap and easy fights to boost his popularity and secure a few quick wins. Though he might be disinclined to initiate a major conflict, that doesn’t mean that Trump is reluctant to use force. And those superficially limited military engagements have a nasty tendency to morph into honest-to-goodness full-blown wars.

That means that while public sensitivity to combat casualties, what my Cato colleague John Mueller over a decade ago labeled the "Iraq syndrome," has clearly constrained Washington’s war-making, it likely isn’t strong enough to stop all dumb wars.