America Still Hasn't Felt the Weight of the Iraq Disaster 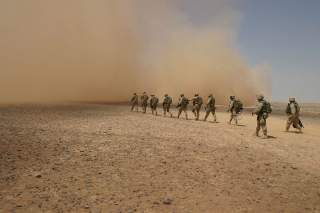 By all objective measures, former prime minister Tony Blair was one of the most successful British politicians in the modern era. He led the Labour Party to three straight general election victories, had an iron grip on his party for a decade and at times carried on as if the Tories were a permanent minority-party nuisance.

The invasion and occupation of Iraq, however, would eventually come crashing down on Blair’s shoulders like an anvil. As Iraq descended into sectarian chaos, as more UK soldiers lost their lives, and as additional information came to light that exposed the flimsiness of the Labour government’s case against Saddam Hussein, a man who was once one of the more popular prime ministers in British history transformed into one of the most reviled. In the nine years since Blair resigned as prime minister, the mistakes and hubris of Iraq have haunted him wherever he goes and whenever he makes a public appearance.

The conclusion of the exhaustive, seven-year investigation into the Iraq war led by Sir John Chilcot must have come as a shock to Blair and the Blairites who continue to serve in the Labour Party. Surely Blair knew that Chilcot’s inquiry would be a hard pill for him to swallow, but even he must have been surprised by the report’s findings. Everything that Blair feared would be included in the inquiry was indeed included: Blair, the report said, dominated the war proceedings and neglected to take dissent into account, overstated the prewar intelligence in favor of a political narrative, was woefully unprepared for an insurgency once Saddam Hussein’s regime was overthrown, and appeared to be committed to a military solution in Iraq months before all diplomatic options were exhausted. Indeed, eight months before the first bombs were dropped on Baghdad, Blair wrote a private letter to George W. Bush that the UK would be with him “whatever.”

There was one saving grace for the former prime minister in the report: Chilcot concluded that Tony Blair did not purposefully deceive the House of Commons and the British people when he made his case for war in the parliament. For a vocal set of MPs, however, this finding was dubious and increasingly difficult to believe once all of the evidence was made public. Last week, the Scottish National Party introduced a resolution that would have established a new investigation on why Blair said one thing in private to the U.S. president and another thing in public to MPs and the British public (that motion was defeated in a resounding 439–70 vote).

Contrast the constant public scrutiny that Tony Blair has received on Iraq over the past nine years with the near silence—one could say impunity—that Bush administration officials have endured, and the comparison is like night and day. Whereas British MPs have at least attempted to provide some kind of accountability and sanction on the top decisionmakers during that time for getting the entire Iraq ordeal so wrong, Bush administration officials who pushed nonexistent connections between Osama bin Laden and Saddam Hussein are either safely ensconced in think tanks across Washington or—in the case of former vice president Dick Cheney—enjoying a quiet retirement in Wyoming. Indeed, some of the very people who raved about Saddam being a threat to America’s very existence are now being considered for secretary of state in the incoming administration. The mere possibility that somebody like John Bolton could be nominated despite all the errors of judgment he made in the past and his downplaying of the chaos in Iraq that resulted post-invasion leads lawmakers like Sen. Rand Paul to tear out their hair in exasperation.

The U.S. Congress has indeed formed its own share of Iraq War investigations. Unfortunately, these investigations are too often mired in jockeying between committee members who hope to protect their party from looking misinformed or arrogant. Others, like the WMD Commission, were narrowly tailored to the misjudgments of the intelligence community rather than the decisionmaking process before, during and after the invasion. To put the lessons of Iraq truly behind us, the United States should copy its friends across the pond and conduct its own Chilcot Inquiry—a nonpolitical, impartial, nonpartisan, no-holds-barred effort with access to all of the documents, correspondence and officials the panel needs in order to come to a definitive series of judgments.

Rightly or wrongly, many people see in Tony Blair as a man who was so ingratiated with the American president and so afraid of losing Bush’s ear that he sacrificed vital British national security interests in order to keep himself in Washington’s inner circle. But at least Blair has been the object of scrutiny. That’s more than we can say about the ideological advocates of regime change in the first Bush administration, many of whom haven’t expressed one bit of remorse about how inaccurate their assumptions were.