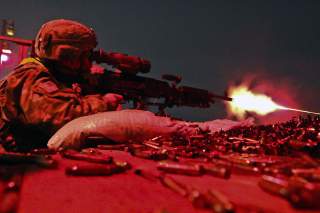 At the beginning of his book, The True Flag: Theodore Roosevelt, Mark Twain, and the Birth of American Empire, Stephen Kinzer explains that Americans’ “enthusiasm for foreign intervention seems to ebb and flow like the tides . . . At some moments we are aflame with righteous anger. Confident in our power, we launch wars and depose governments. Then chastened, we retreat—until the cycle begins again.”

If fervor for overseas military adventures moves like the tides, then right now we see more sand and mud than blue water. Americans aren’t anxious to start more wars. On the contrary, they believe that U.S. interventions have undermined our security, and they want to try something else. For example, research jointly sponsored by the Charles Koch Institute and the Center for the National Interest found that 51 percent of Americans believe that our post–9/11 foreign policy has made us less safe. And they want more resources dedicated to nation-building at home—not nation-building abroad. Nearly eight in ten respondents favor dedicating additional tax dollars to domestic spending, not a massive military buildup.

Meanwhile, a poll commissioned by the Committee for Responsible Foreign Policy revealed that nearly 71 percent of Americans want their representatives in Congress to constrain Washington’s interventionist impulses. Americans believe that war is a last resort. They desire “clearly defined goals to authorize military engagement overseas, including a timeline and what will constitute victory; [and] oversight and accountability from Congress in regards to where troops are stationed and what is being accomplished abroad.” A solid majority of Americans, according to the poll, also want assurances that weapons and equipment provided to others are not used in ways that harm innocent civilians.

“The research showed that 67.4 percent of American voters disapprove of Congressional leadership allowing our involvement in conflict overseas without formally approving military action—or even allowing a debate,” explained Bill Dolbow, a spokesman for the committee.

Donald Trump didn’t win the presidency on the basis of his foreign-policy views, per se, but he did do well among voters who doubted that the country was moving in the right direction. That included discontent with our experiences in recent wars.

And yet, for all his talk about draining the swamp and sticking it to the establishment, Donald Trump has not embarked upon a radical restructuring of the nation’s foreign policy.

He approved an escalation of the war in Afghanistan, and pledged to leave U.S. troops in central Asia indefinitely. He has expanded the number of U.S. troops in Europe, maintained a large and obtrusive U.S. naval presence in the Asia-Pacific region, and deepened American involvement in the civil wars raging in Syria and Yemen. He even seems poised to initiate war on the Korean Peninsula, one that could dwarf all post–9/11 conflicts, combined, in terms of lives lost and treasure squandered.

Others have different targets in their sights. John Bolton, for example, inveighs against the Joint Comprehensive Plan of Action (JCPOA), the negotiated agreement that placed strict limits on Iran’s nuclear program, but that Trump has always hated. Bolton favors instead a policy of greater pressure with the aim of “ending Iran’s 1979 Islamic Revolution before its 40th anniversary.”

Bolton attempts to rally Wall Street Journal readers to greater enmity toward Iran by invoking the memory of the American hostages seized more than thirty-eight years ago, in the wake of the revolution that overthrew the American-backed Shah. In an earlier era, warhawks and jingos cried, “Remember the Maine,” to whip Americans into a frenzy for war.

But, as before, the routine grows tiresome. Even some of the most vocal imperialists in the late nineteenth century had begun to rethink the wisdom of territorial expansion by military conquest in the first decade of the twentieth century. Offered the opportunity to take control of the Dominican Republic in 1904, President Theodore Roosevelt replied “I have about the same desire to annex it as a gorged boa constrictor might have to swallow a porcupine wrong-end-to.” The distant Philippines were an even bigger headache for Roosevelt. He worried that they might become a geopolitical liability vis-à-vis Japan.

Explains historian David Mayers, “Americans were tentative, in some sense abashed by their imperium and nervous about the cost of colonial upkeep.”

I’ve heard credible reports that senior national-security officials in the Trump administration are frustrated by think-tank scholars and academics who point out that there is no viable military solution to the ongoing standoff with North Korea. The White House worries that research estimating the scale of death and destruction that would ensue in the event of a war undermines the credibility of their threats, allegedly reducing the likelihood that Kim Jong-un will capitulate to American demands.

But, if such stories are true, the Trump administration shouldn’t blame Beltway pundits and TV talking heads for speaking the truth. The president and his national-security advisers must understand that the American people’s widespread dissatisfaction with our nation’s wars is unlikely to abate any time soon. In short, the president should reconsider his faith in military solutions to complex, and perhaps intractable, problems.

And if he—and others around him—persist in believing that more wars will cure what ails us, the public is likely to start searching for new leaders who take seriously their concerns.