America's Afghan Mission Is No Longer Serving Its Purpose 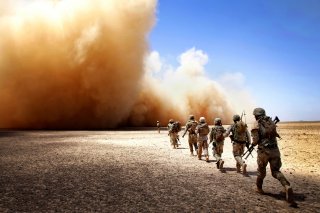 On Wednesday morning in the Afghan capital, a terrorist detonated a massive truck bomb near Kabul’s diplomatic quarter, killing at least eighty and wounding more than 350 others. A NATO statement on the bombing emphasized that “attacks such as these only serve to strengthen our commitment to our Afghan partners as they seek a peaceful, stable future for their country.” Yet even as Kabul and NATO hunt down those responsible, there are bigger questions for U.S. policymakers: are American military measures actually improving security in Afghanistan? Evidence clearly reveals the answer is no. Before the president deploys one more soldier to Afghanistan, a change in strategy is required.

At a press briefing at the Pentagon last December, the commander of U.S. Forces in Afghanistan restated long-standing policy there. “Our main objective in Afghanistan,” Gen. John W. Nicholson told reporters, “is to prevent the country from being used as a safe haven for terrorists to attack to the U.S. or our allies.” While the aspiration is certainly understandable, the policy has been an abject failure for sixteen long years. Without a major change of course, current and future U.S. policies in Afghanistan will likewise fail. There are three critical reasons why.

First, the objective itself is impossible to attain. Afghanistan is a vast, untamed and mountainous country. I served my second deployment there in 2010–11, at the height of President Obama’s surge. During the summer of 2011 there were one hundred thousand American troops fighting in Afghanistan. I traveled extensively throughout the country and can confirm that even with the highest concentration of U.S., NATO and Afghan security forces, major sections of the nation were beyond the troops’ ability to control.

Even then, the Taliban had freedom of maneuver in large portions of eastern, central and southern Afghanistan. Today, the government controls less than 60 percent of its territory. It is impossible, therefore, to set as a policy an intent to “prevent” terrorists from using Afghanistan as a launching pad for planning attacks against the United States. Even with two hundred thousand U.S. troops, it would be impossible.

Secondly, even if theoretically it were possible to drive all the terrorists out of the country, the successful accomplishment of that goal would be meaningless. The reason? As should now be very clear, terrorists in the modern age do not need specific pieces of terrain to conceive and practice attack plans. They use the internet, telephones, text messages and other electronic means to coordinate and plan. In those cases when physical meetings are required, terrorists will convene in locations where the security environment is the most permissive.

Prior to 9/11, Afghanistan was an effective place to plan and practice, because the world paid little attention there. Since that time, however, U.S. and NATO troops have focused a great deal of attention on Afghanistan, Iraq and now Syria. As a result, like cockroaches exposed to the light, they’ll scurry for new places to hide. A quick analysis of some of the more egregious terror attacks in the United States and the West, especially over the past two years, illustrates this fact.

• January 2015: Numerous assailants murder seventeen people in Paris at magazine Charlie Hebdo. Most of the attackers were from Algeria, alleged to have trained in Yemen.

• July 2016: Eighty-four people are killed and approximately two hundred wounded in Nice, France when a Tunisian-born French citizen plows through a Bastille Day celebration. It is still unclear what radicalized him.

• November 2016: A Muslim man attacks Ohio State students with a knife, wounding eleven. The attacker was born in Somalia, and radicalized in the United States.

• December 2016: A Tunisian man, allegedly radicalized during the Arab Spring, steals a large truck and drives into a crowded German Christmas market.

None of the attacks were known to have been planned in Afghanistan, Iraq, or Syria, despite the fact that all three countries are teeming with thousands of potential terrorists and engaged by tens of thousands of US and NATO military personnel. Terrorists do not need Afghanistan—or any other specific geographic location—to plan attacks against the United States. Expending billions of dollars and sacrificing the blood of American servicemen and -women towards this objective does not help secure our country.

Lastly, whatever aspiration Washington may seek, there is effectively no strategy governing the conduct of operations on the ground in Afghanistan. The Congressional Research Service (CRS) released an assessment for members of Congress last week regarding the possibility that the administration will deploy several thousand more combat troops there. The CRS study found that currently “it is difficult to discern an overall, coherent strategy for Afghanistan.”

Given that the United States has pursued objectives that are not attainable, set goals that wouldn’t improve security even if they were accomplished and established no identifiable strategy, Trump must not deploy additional troops to Afghanistan. Instead, he should give serious consideration to a making a significant change of focus for the mission, and order the formation of a new strategy that has a chance to improve U.S. national security.

First, the president must acknowledge the bankruptcy of the never-valid idea that we can “fight them over there so we don’t fight them over here.” Sending thousands of American military personnel overseas has not made the nation safer. Second, the mission in Afghanistan must eventually end. The Afghan government must be given firm governing benchmarks, over a fixed period of time, that they must meet—or face the genuine prospect of the withdrawal of American military support. Diplomatically, the United States must conduct intensive give-and-take negotiations with Pakistan to cease support for the insurgency or face meaningful penalties.

Third, the most effective way to combat terrorism is to defend America’s borders by improving cooperation between the FBI, CIA and Homeland Security to keep potential terrorists out of the country. The administration must also design effective countermeasures to prevent current residents from becoming radicalized.

Keeping the nation secure is possibly the most sacred duty with which the president is charged. Many quarters of today’s world is filled with violent, radicalized men who seek to kill American citizens and attack U.S. interests. Keeping our citizens safe is a highly complex, incredibly difficult task, and there are no easy answers. What we must not do, however, is continue expending, into perpetuity, enormous resources in the pursuit of objectives that don’t improve U.S. national security.