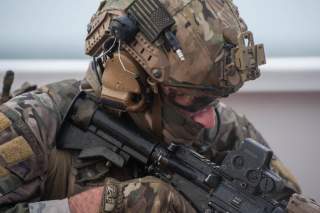 Two developments in the past month indicate that Washington’s mixed policy of engagement and containment (or “congagement”) toward China has begun to tilt more toward containment. The first development was the visit of Secretary of Defense Ashton Carter to India in mid-April and the signing of a bilateral cooperation agreement on military logistics. The other episode is President Obama’s just-completed trip to Vietnam and the announced lifting of the long-standing arms embargo on that country. As usual, American officials insist that the marked change in U.S. policy toward Hanoi is not in any way directed against China. But such statements strain credulity, especially when viewed in the larger context of U.S. warships conducting “freedom of navigation” patrols in the South China Sea and bluntly reminding Beijing of America’s security obligations to the Philippines under a bilateral defense treaty.

The containment side of U.S. policy has gone from merely assembling some of the necessary components, to be activated at a later date if necessary (first gear), to the initial phase of activation (second gear). More emphasis is likely to be placed on China as a serious strategic competitor, if not an outright adversary. But developing any kind of a containment policy against China is almost certain to prove hopelessly difficult. Despite the sometimes inflammatory rhetoric coming from Donald Trump and some other China bashers, the bilateral economic relationship remains quite extensive and crucial. China is America’s second largest trading partner. In 2015, the United States exported $116 billion in goods to China while importing $482 billion. Disrupting that relationship would be extremely costly and painful for both countries.

That point underscores one key reason why reviving anything even faintly resembling the Cold War–era containment policy that worked against the Soviet Union is a hopeless quest. America’s economic relations with the USSR were minuscule, so there was little sacrifice on that front in taking a hardline stance against Moscow. That is clearly not the case today regarding America’s economic connections to China.

There is also the matter of assembling a reliable alliance against Beijing. Conducting a containment policy against the Soviet Union during the Cold War was feasible because (at least during the crucial formative stages) neither the United States nor its key allies had much of a political or economic relationship to lose with Moscow. The costs, therefore, of shunning Moscow were minimal. That is clearly not the case with China. Most of the East Asian countries, including close U.S. allies Japan and South Korea, already have extensive economic links with Beijing. Indeed, China is Japan’s largest trading partner, accounting for one-fifth of that country’s total trade. It would not be easy for those countries to jeopardize such stakes to support a confrontational, U.S.-led containment policy aimed at Beijing. Tokyo undoubtedly has concerns about China’s behavior in the East China Sea (and about overall Chinese ambitions), but it would still be a reluctant recruit in a hostile containment strategy.

Indeed, as time passed during the Cold War, even the containment strategy directed against the Soviet Union proved increasingly difficult for U.S. leaders. That was especially true after the early 1970s, when West Germany’s policy of Ostpolitik sought better relations with communist East Germany, and indirectly with Moscow and the rest of the Soviet bloc. As connections deepened between democratic Europe and the USSR, support for hard-line U.S. policies began to fade. That point became evident in the 1980s, when U.S. leaders attempted to persuade their European allies to reject the proposal for a natural gas pipeline from the Soviet Union to Western Europe, fearing that it would give Moscow an unhealthy degree of policy leverage. Much to Washington’s frustration, key European allies rejected the advice.

If the United States attempts to mobilize regional support for a containment policy against China, it will start out operating in an environment even less conducive than the policy environment regarding the Soviet Union in the 1980s. Washington’s courtship might be welcomed by very small countries, such as the Philippines, that are already on extremely bad terms with Beijing. Larger powers, though, are more likely to see what benefits they can entice and extract from Washington, without making firm commitments that would antagonize China and jeopardize their own important ties to that county.

There is a final reason why an overt containment policy against China would be a poor option for the United States. Several troublesome global or regional issues will be difficult to address without substantial input and cooperation from China. It is nearly impossible, for example, to imagine progress being made on the difficult and complex issue of North Korea’s nuclear and ballistic missile programs without China’s extensive involvement.

The United States needs to lower, not increase, its level of confrontation toward China. That also means restoring respect for the concept of spheres of influence. In attempting to preserve U.S. primacy in East Asia and the western Pacific, U.S. leaders are intruding into the South China Sea and other areas that logically matter far more to China than to America. Such a strategy is likely to result either in a humiliating U.S. retreat under pressure or a disastrous military collision. A containment strategy is a feeble attempt to evade that reality.

Ted Galen Carpenter is a senior fellow in defense and foreign policy studies at the Cato Institute and a contributing editor at the National Interest. He is the author of ten books and more than six hundred articles on international affairs.