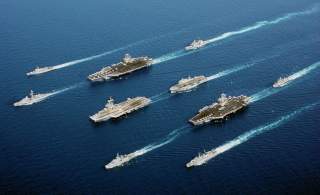 A new mini-crisis erupted in late August near the Strait of Hormuz when small patrol boats from Iran’s Islamic Revolutionary Guard Corps intercepted and continued to sail within a few hundred yards of a U.S. destroyer, the USS Nitze. The Nitze responded by firing warning shots.

U.S. officials immediately condemned the incident as a terrible provocation, a theme that members of the American media obediently echoed. No one seemed to question why it was not provocative for the United States to sail a heavily armed destroyer (along with other warships) six thousand miles away from the American homeland to operate within a few miles of the Iranian coast. Yet Iran’s interception of that warship was automatically deemed provocative.

This is a theme that we have witnessed far too often: the assumption that whatever the United States does militarily in the international arena is not only acceptable, but should be beyond challenge or criticism. According to that reasoning, Washington and its compliant allies had every right to enforce a no-fly zone to influence the outcome of the internecine conflict in Bosnia in the 1990s. Likewise, the United States had every right to impose similar restrictions in Iraq. When Serbian leaders and Iraqi dictator Saddam Hussein resisted such measures, they were the ones escalating the crises.

We see similar logic today as the United States meddles in Syria’s civil war. Again, Iran’s involvement in the conflict roiling a neighboring state is considered evidence of nefarious goals. Likewise, American hawks consider Russia’s intervention as outrageous and an indication of odious motives, even though Syria is barely six hundred miles from the southern Russian border, and the governing Assads have been Russian political clients for decades. Even the Obama administration has seethed about Vladimir Putin’s audacity in sending Russian aircraft to back the beleaguered regime of President Bashar al-Assad. Throughout the American media, as well as the political and foreign-policy communities, Moscow’s military intrusion in Syria is considered utterly illegitimate. And yet America’s intervention from six thousand miles away is widely viewed as not only proper but inescapable, for both strategic and moral reasons.

The attitude that no U.S. military action is ever provocative emerges even when U.S. forces are operating in the immediate security environs of other major powers. Thus, the Navy’s so-called freedom-of-navigation patrols in the South China Sea, thousands of miles from the American homeland, are portrayed as perfectly normal—even though Beijing objects vehemently to them. Chinese naval and air operations countering those patrols are, of course, dangerous, provocative and unacceptable. That is the case even though the South China Sea is a lot closer to China than it is to the United States.

A similar double standard is evident regarding deployments involving U.S. and Russian warships in both the Baltic Sea and the Black Sea. There are frequent U.S. complaints that Russian ships or aircraft have harassed American vessels. There is never any apparent awareness that Moscow might legitimately consider having U.S. military operations in waters so close to Russia as a security threat. Indeed, Obama administration officials summarily dismiss Moscow’s concerns and objections.

Yet all we would need to do in the cases of Iran, China and Russia is engage in a basic thought exercise. How would the United States respond if the naval forces of another power sailed uninvited into waters close to U.S. territorial waters—and did so repeatedly despite Washington’s objections? It is unlikely that either U.S. officials or the American people would consider it a friendly act. Imagine the reaction, for example, if a fleet of Chinese warships routinely conducted ongoing “freedom of navigation” exercises in the Gulf of Mexico. Likewise, it is difficult to contemplate Americans remaining indifferent to the sight of Russian destroyers and cruisers in the waters off Cape Cod.

U.S. officials and the American news media need to become far more aware and sophisticated about how other governments and populations perceive U.S. military actions. The smug assumption that “we’re the good guys, so nothing we do is wrong or provocative” is both myopic and dangerous. From the perspective of other countries, “reasonable” U.S. actions may seem profoundly threatening. And despite the risks, some of those countries no longer seem inclined to simply cower before Washington’s might.