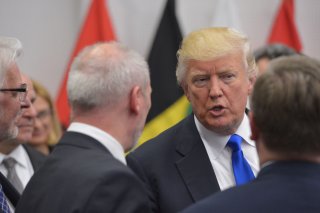 The collective freak-out over President Trump’s first foreign trip and its aftermath continues. The president was typically upbeat: “Trip was a great success for America. Hard work but big results!” he tweeted to his followers on Sunday morning. But the foreign-policy “blob” begs to differ.

Leave aside the bizarre spectacle of sword dances and glowing orbs in the medieval kingdom of Saudi Arabia. Ignore the hugs and handshakes in Israel and Vatican City. What truly matters, as far as the foreign-policy establishment is concerned, is the state of the transatlantic relationship. And since our European allies are none too happy with Donald Trump, the inside-the-Beltway crowd isn’t either.

The Washington Post’s Anne Applebaum, for example, declared: “As a result of this trip, American influence, always exercised in Europe through mutually beneficial trade and military alliances, is at its rockiest in recent memory.” “The Russian government,” she continued, “which has long sought to expel the United States from the continent, is overjoyed.”

The reaction to Angela Merkel’s comment on Sunday, during a campaign event in Bavaria, is particularly illuminating. The German Chancellor stressed the importance of maintaining friendly relations with the United States, the United Kingdom and Russia, but added, “We Europeans must really take our destiny into our own hands.” Alluding to the fact that Americans elected a man demonstrably unfit for the presidency, and the British public’s decision to exit the European Union, Merkel explained: “the times in which we can fully count on others are somewhat over.”

Europeans have counted on NATO for nearly seven decades. Lord Ismay, NATO’s first secretary general, explained that the purpose of the alliance was “to keep the Russians out, the Americans in, and the Germans down.” “Now, Merkel is suggesting that the Americans aren’t really in, and, by extension, Germany and Europe are likely to take on a much more substantial and independent role than they have in the past 70 years,” George Washington University professor Henry Farrell said.

Merkel’s temperament is the polar opposite of Trump’s. She is highly cautious. This speech is not an impulsive move. Instead, Merkel is starting to make the case for a different E.U., one that is stronger, more self-reliant and disinclined to look to the United States for leadership. If she wins the upcoming German election decisively and is able to secure enough agreement from other European states to isolate the naysayers, she may set in motion a substantial long-term shift in the E.U.-U.S. relationship.

Yet while those inside the Washington Beltway tremble at that thought, Americans living outside the bubble are likely to greet the potential for such change with a sigh of relief, and perhaps gentle applause.

These were the people who responded to Donald Trump’s campaign rhetoric. He beat the drum about freeloading allies during his successful campaign, and it resonated. His supporters were surely pleased when he reiterated at the NATO summit last week that NATO members must pay their fair share and meet their pledge to spend at least 2 percent of GDP on defense. (Trump also implied that the NATO allies actually owe money to U.S. taxpayers. They don’t).

Pollsters have noted the dramatic disconnect between the public and the elites for some time, and nowhere is this gap larger than on the question of whether our wealthy allies should do more to defend themselves and their interests. Earlier this year, the Chicago Council on Global Affairs published the latest of its regular surveys that track the differences between the public at large, and U.S. foreign-policy opinion leaders. The report cover claimed “Americans are generally closer to ‘The Blob’” than conventional wisdom suggests, but that is not entirely accurate. In certain cases, members of “The Blob” have more in common with each other than they do with the rank-and-file voters that they purport to lead.

The elite-public divide was particularly pronounced with respect to U.S. alliance commitments. The council presented a list of possible foreign-policy goals, and asked respondents to identify those that should be “very important,” “somewhat important” and “not important at all.”

Among the public at large, just 35 percent identified “Defending our allies’ security” as a very important goal. That placed it thirteenth out of thirteen, below “limiting climate change” and “promoting the full participation of women and girls in their societies around the world.” By contrast, among the elites, 71 percent of Republicans, 64 percent of Democrats and 53 percent of Independent leaders ranked defending U.S. allies as “very important”— the fifth most important foreign-policy goal for each.

It’s too soon to say whether Merkel will follow through on her threat/promise. But if she does, we should expect many Americans to cheer her on.