Biden in Turkey, Turkey in Syria 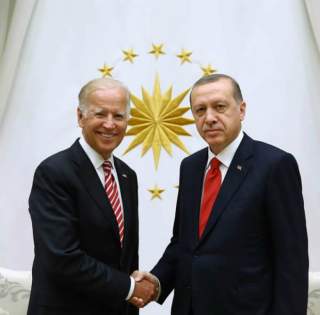 Turkish-American relations have a surreal quality. In public the pendulum often seems to swing from one extreme to the other, from friendliness to animosity. However, this swing of the pendulum makes very little difference to the strategic relationship cultivated by the two NATO allies for the past sixty-five years.

Two events this week bear out the validity of this conclusion. First, Vice President Biden’s visit to Turkey and accompanying statements by him and his Turkish interlocutors demonstrate the solidity of the relationship. In a joint press conference with President Erdogan, Biden reaffirmed America’s commitment to the two strategic Turkish objectives vis-à-vis Syria, namely, the preservation of the territorial integrity of that country (a direct blow to Kurdish aspirations for autonomy leading to independence) and the refusal to accept a Syrian Kurdish presence on the western side of the Euphrates river on Turkey’s borders.

Second, hours before the Vice-President’s arrival, a coordinated Turkish-American attack was launched by Turkish ground and air forces and American aircraft to eliminate the ISIS presence in Jarabulus on the western side of the Euphrates coveted by the Kurdish PYD, who are also allies of the US in its fight against ISIS. The Turkish advance was accompanied by shelling of Kurdish positions near Manbij, forty kilometers south of Jarabulus, leading to the PYD’s announcement that its military wing known as the YPG was withdrawing from Manbij.

The Turkish military foray into Syria had two important objectives. Now that Ankara after several terrorist bombings has come to consider ISIS as a mortal threat to Turkey, the first was the removal of ISIS presence close to the Turkish border to prevent further infiltration of ISIS terrorists into Turkey. The second objective, equally if not more important, was to prevent the PYD/YPG’s imminent capture of Jarabulus and roll back recent Kurdish advances close to the Turkish border. American collaboration in this Turkish military campaign was not so much a signal of coordination between the two countries against ISIS as it was a clear message to the Syrian Kurdish leadership: if forced to choose between the PYD and Ankara, Washington will invariably choose to side with its NATO ally.

These moves seem to belie the recent anti-American rhetoric emanating from many quarters, including government spokesmen, in Turkey following the rather lukewarm and delayed support accorded to the Turkish government by Washington and its European allies after the failed coup. The perception in some quarters in Turkey that the restrained Euro-American support to the government was an indication that the European Union and the United States would have welcomed Erdogan’s overthrow led to some remarkably intemperate statements from Ankara, including the one by presidential spokesman Ibrahim Kalin that “Had the coup succeeded, you would have supported it, like in Egypt. You don’t know this nation, but they know you.”

The American and European stance stood out in stark contrast to the immediate and enthusiastic support offered by Iran and Russia to the Erdogan government. Moscow and Tehran’s backing came despite their differences with the Ankara, especially over Syria and the future of President Assad. It is true that the coup attempt caught the Western chanceries, including Washington, flat-footed. Furthermore, the overreaction of the Turkish government—detaining thousands of people and firing thousands more—gave the impression that this may have been an inside job to provide Erdogan with the excuse to further his dictatorial ambitions. The Western media overplayed this concern and thus put the United States and the EU on guard against supporting Erdogan unequivocally.

The Iranians and the Russians were not concerned much with Erdogan’s authoritarian tendencies and wanted to capitalize on the flexibility that his government had begun to show on the Syrian issue. Moreover, Iran was interested in cooperating with Turkey both to prevent the emergence of an autonomous Kurdish entity in Syria and to root out ISIS presence from Syria and Iraq. It also suited Erdogan to exploit Iranian and Russian support to demonstrate to Turkey’s NATO allies that he was not without friends in his hour of need.

However, in the final analysis it has become clear that Washington and NATO could not afford to lose Turkey, and Turkey did not have the luxury to break away from the Western alliance and its strategic relationship with the United States. NATO’s Incirlik airbase in Turkey is a principal facility used by American and allied aircraft for their mission to degrade ISIS facilities. Incirlik served as a major base of operations in the wars in Afghanistan and Iraq as well. With the United States embroiled in multiple potential arenas of conflict in the Middle East, the importance of Incirlik to American strategy cannot be understated.

Economic and political imperatives also dictate Turkish policy. The EU and Turkey are linked since 1995 by a Customs Union, and the EU is Turkey's number one import and export partner, while Turkey ranks seventh in the EU's top import and fifth in export markets. Politically and strategically Turkey has been a loyal member of NATO since the early 1950s and is covered by the principle of collective defense enshrined in Article 5 of the Washington Treaty, NATO’s founding document. Even if there is some debate as to whether Article 5 can be invoked by Ankara in the case of a crisis involving Turkey linked to Syrian or other Middle Eastern conflicts, Ankara needs the protection of Article 5 to instill a degree of uncertainty in the minds of potential adversaries, not excluding Russia and Iran, operating in the Middle East.

This leaves us with the issue of Fethullah Gulen who, the Turkish government argues, was the mastermind behind the failed coup. Turkey has demanded his extradition from the United States and is busy presenting tomes of evidence to back its demand. However, it is becoming increasingly clear to seasoned observers that the importance of Gulen to the future of US-Turkish relations is overblown. The apparent obsession with Gulen on the part of Erdogan is more tactical than strategic. As long as the Gulen affair continues to hog the headlines in the Turkish media it provides Erdogan the justification for the purges he has undertaken and continues to undertake in the military, judiciary, police, academia and the media to silence all critical voices and impose his will on state institutions.

Erdogan is not genuinely interested in having Gulen extradited to Turkey, both because then Gulen will lose his instrumental value and also because his government would not know what to do with the aged, reportedly ailing preacher. He and his advisors, despite their public rhetoric, are probably convinced that the American judicial system will not let the extradition take place, at least not for several years. This suits them well because they can continue to exploit the public sentiment against Gulen domestically to further their own agenda, including changing the Turkish political system into a presidential one. They can also keep holding it as a sword over the United States’ head, constantly reminding the latter that it has not lived up to its responsibilities as an ally by allowing Gulen to live freely in Pennsylvania. They assume that by doing so, they will gain some moral advantage over Washington and keep it on the defensive if another crisis erupts in Turkish-American relations.