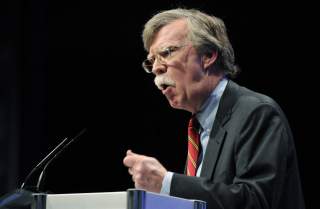 Reports that North Korean dictator Kim Jong-un arrived in Beijing as the head of a delegation has produced extensive speculation about the reason for his surprise visit. A popular theory is that China is attempting to reassert its role in the North Korea crisis and facilitate talks between Kim and President Donald Trump. Beijing has pressed for high-level, bilateral talks between the United States and the DPRK for many years, and the increasing likelihood that Washington finally is amenable to such a meeting would spur increased Chinese diplomatic pressure on its North Korean ally to respond positively to that development.

Even if a Trump-Kim summit actually takes place, it merely will be the first, modest step in a difficult process to resolve the nuclear crisis. Trump’s appointment of the ultra-hawkish John Bolton as his new national security advisor does not bode well for constructive negotiations. Bolton previously has stated that a preventive U.S. military strike on North Korea would be justified. His statements since his appointment about the negotiating strategy the United States should pursue in any Trump-Kim meeting likewise do not inspire confidence about his desire for a peaceful settlement of the crisis.

As with most hardliners, Bolton insists that North Korea make a firm commitment at the outset that it is willing to terminate its nuclear and missile programs. In fact, he stated in a recent interview that if Pyongyang doesn’t make that preemptive concession, any meeting between Trump and Kim would be—and should be—very brief. On another occasion, he indicated that that Trump should insist on an agreement akin to the one the United States and its European allies reached with Libyan leader Muammar el-Qaddafi in 2003.

That is an astonishingly unrealistic position, and it creates major doubts about whether Bolton wants a peaceful settlement at all. He acts as though North Korean leaders don’t recall what followed the Qaddafi agreement. When the Libyan strongman agreed to terminate his country’s embryonic nuclear program, the Western powers lifted many of their economic sanctions and eased Libya’s ostracism from international institutions. However, the United States and its NATO allies later double-crossed Qaddafi and helped insurgents overthrow his regime. The culmination of that betrayal was the Libyan leader’s torture and gruesome execution.

It is difficult to imagine that Bolton is so naïve as to believe that the Qaddafi model would have the slightest appeal to North Korea’s leadership. Indeed, Pyongyang has specifically cited the Libya precedent as a key reason why their country needs to retain a nuclear deterrent. Proposing a Libya-style settlement virtually guarantees that negotiations with Kim’s government will get nowhere.

Bolton’s approach reflects an all-too-common U.S. negotiating strategy: make maximum, generally unrealistic, demands while offering few, if any, meaningful concessions. Washington is pursuing a similar approach in its policy toward Russia. Among other things, the United States insists that Moscow not only end its support for insurgents in eastern Ukraine, but also return Crimea—the home of Russia’s vital naval base at Sevastopol—to Ukraine. The chances of Vladimir Putin or any other Russian leader meeting the latter demand are essentially nil. Yet U.S. leaders continue to insist on such a capitulation before the lifting of economic sanctions or any other improvement in bilateral relations can take place.

The prospects of getting North Korea to return to nuclear virginity were never good to begin with, despite reports following Kim’s meeting with Chinese president Xi Jinping that the DPRK was willing to commit to denuclearization. For reasons of national prestige and international clout, as well as wanting a deterrent against any forcible regime-change ambitions on Washington’s part, North Korean leaders want to retain the country’s nuclear and ballistic missile capabilities. If the Trump administration insists on adopting the approach to North Korea that Bolton has embraced, the already faint chances of a settlement that includes denuclearization become nonexistent.

The only path to such an accord would be to offer Pyongyang a “grand bargain” in which Washington provides very appealing incentives that meet North Korea’s long-standing stated objectives. Those objectives include replacing the current armistice with a formal peace treaty finally ending the Korean War, U.S. recognition of the North Korean government and the establishment of embassies in the two countries, the lifting of both U.S. and international economic sanctions, an end to annual U.S.-South Korean military exercises, and the phased withdrawal of U.S. forces from South Korea. In addition, the United States likely would have to renounce any forcible regime-change ambitions regarding North Korea, and agree to a formal nonaggression pact that includes an explicit Russian and Chinese role as guarantor powers.

Bolton’s approach virtually guarantees the failure of a Kim-Trump summit and any other negotiations between Washington and Pyongyang. Kim especially is not likely to put his neck in a Qaddafi-style noose, giving up North Korea’s already significant nuclear arsenal in exchange for easily reversible paper promises from Washington. The Bolton strategy greatly increases the likelihood of a U.S. preventive war, and given his previous views, that may well be what he wants. Sensible Americans, though, should insist on a negotiating strategy that reduces the danger of such a calamitous outcome.

Ted Galen Carpenter, a senior fellow in defense and foreign-policy studies at the Cato Institute and a contributing editor at the National Interest, is the author of ten books and more than seven hundred articles on international affairs. He and Doug Bandow coauthored The Korean Conundrum: America’s Troubled Relations with North and South Korea.