Can America Be the World's Umpire? 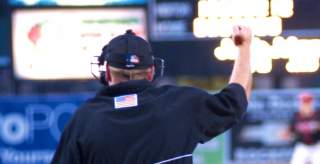 In her book and forthcoming documentary film, American Umpire, historian Elizabeth Cobbs likens America’s global role to that of the men in blue on the baseball diamond. By establishing the rules of the international system after World War II, and enforcing those rules when others stray, Uncle Sam allows everyone to play the game.

But it wasn’t always easy, and the costs are mounting. The film concludes (spoiler alert!) with the recognition that even the best baseball umpires have help. It would be unreasonable to expect John Hirschbeck to call balls and strikes at home plate, safe or out at first base and caught stealing at second, all by himself. That is why four umpires work a typical MLB game, and six or seven work the playoffs and World Series.

Similarly, it was never realistic to think that a single country, even one as great and powerful as the United States, could manage the international system all by itself, and never make any mistakes. But that hasn’t stopped primacists from claiming God-like powers for the policymakers at the White House and in Foggy Bottom. Recall Madeleine Albright’s famous claim to the “Today” show’s Matt Lauer: ''If we have to use force, it is because we are America. We are the indispensable nation. We stand tall. We see further into the future.''

That was in 1998, before Kosovo, before Afghanistan, before Iraq, and before Libya. After all those interventions, and many more, Albright’s eventual successor as Secretary of State, now the Democratic Party’s nominee for president, evinces barely a hint of doubt or introspection about America’s ability to stand taller, and see farther. As Mark Landler and Micah Zenko have noted, Hillary Clinton retains her hawkish instincts. In her broadside against Donald Trump back in June, she affirmed her commitment to U.S. global leadership:

I believe with all my heart that America is an exceptional country—that we’re still, in Lincoln’s words, the last, best hope of earth….We lead with purpose, and we prevail.

It is all well and good to love one’s country, and Trump’s suggestion that America has slipped to second-class status warrants a strong response. But to imply that the United States never makes mistakes, and always prevails, is nonsense on stilts. Like any umpire, even the best ones, we’ve gotten some calls wrong. There really is wisdom in crowds. When most of your friends refuse to follow you over a cliff, it might make sense not to jump. Sensibly, Cobbs’ film suggests that we step down from our perch as the world’s indispensable nation, and begin to share the burdens of global leadership with others. The idea is worthy of a wider discussion.

But there is another flaw at the heart of the idea that the United States can and should be the world’s ump: Umpires don’t play the game. They don’t swing the bats or throw the balls. They don’t run the bases. They wear different colored uniforms. They are, by definition, disinterested in the outcome of the contest. They can think that Alex Rodriguez is a horrible human being—but that doesn’t matter; if he hits the ball out of the park, he still gets credit for the home run.

And yet, for primacy to hold, it must. Thus, defenders of primacy routinely claim that Uncle Sam can play the role of umpire without arousing the ire of other parties. (See, for example, Hedley Bull’s definition of primacy here). That supposedly explains why there has been so little balancing against U.S. power by possible rivals.

But the evidence of underbalancing is, well, underwhelming. China is balancing in the South China Sea, and Russia is balancing in the countries along its western border. Beijing doesn’t trust the American umpire to call fair or foul on nettlesome territorial disputes. Putin and his cronies challenge the United States’ authority to weigh in on the treatment of ethnic Russians minorities in Ukraine or the Baltic states. They don’t expect the United States to call the game fairly, because U.S. officials ignore the principle of territorial integrity when it suits them. China balks at our supposed disinterestedness in Asia for similar reasons.

Even poor and weak countries routinely defy the American umpire. How many presidents have tried to throw the Kim family regime out of North Korea? When an MLB umpire tells a quarrelsome manager “You’re outta here”—he’s out of there; the skipper doesn’t get to stick around in the dugout.

The sort of underbalancing that we have seen in the world is also problematic for primacy. U.S. security guarantees to like-minded allies, from Germany and Poland to Japan and South Korea, have likely discouraged these countries from spending more on their defenses. The U.S. alliance has also factored into the decision by many of these countries to eschew nuclear weapons. In that sense, however, U.S. foreign policy can be said to have done a decent (though not perfect, see, e.g. the United Kingdom, France and Israel) job at discouraging nuclear proliferation among its allies, but a lousy job of stopping bad actors from wanting nukes (see Iraq, Iran, Libya, North Korea).

Ten years ago, two different authors stumbled upon this central problem of primacy, or benevolent hegemony—the myth of disinterest—though neither chose to dwell on it. Their intellectual paths had crossed in interesting ways. One was a reformed neoconservative who began to have doubts once the Iraq mission turned south. The other had been a harsh critic of Bill Clinton’s relatively activist foreign policy in late-1990s, but by 2005 was making the case for more activism.

In America at the Crossroads, Francis Fukuyama doubted the staying power of benevolent hegemony which contained “a number of structural flaws and contradictions.” In addition to its misplaced faith in the “competence” of the hegemon to manage world affairs, the theory also rested:

on a belief in American exceptionalism that most non-Americans simply find not credible. The idea that the United States behaves disinterestedly in the world stage is not widely believed because it is for the most part not true and, indeed, could not be true if American leaders fulfill their responsibilities to the American people. The United States is capable of acting generously in its provision of global public goods, and has been most generous when its ideas and self-interest have coincided. But the United States is also a great power with interests not related to public goods.

The American people’s limited tolerance for paying the high costs of U.S. foreign policy would be severely tested, Fukuyama explained, if overseas projects “do not have clear benefits to U.S. interests.”

“Americans are not, at heart, an imperial people,” he continued:

Even benevolent hegemons sometimes have to act ruthlessly, and they need a staying power that does not come easily to people who are reasonably content with their own lives and society.

Michael Mandelbaum sensed this, too. In his book, The Case for Goliath, Mandelbaum anticipated that the United States’ ability to police the world would depend on how much it cost and Americans’ willingness to pay those costs.

On that final score, however, he was not optimistic. He noted, as Fukuyama had, that for Americans, our own national interests “have priority.” This, he went on, “does not bespeak unusual financial stinginess or moral callousness: Americans approach the world as much as other peoples do....For the American public, foreign policy, like charity, begins at home.” If they sensed that playing the global cop delivered clear benefits, and served U.S. national interests, and at reasonable cost, it might continue in its hegemonic role. But he worried that most Americans wouldn’t see it that way. Thus, Mandelbaum predicted “the American role in the world may depend in part on Americans not scrutinizing it too closely.”

But then Americans started noticing. Iraq didn’t help, but the biggest factor may have been the financial crisis in 2008. The tone and substance of Mandelbaum’s next book, The Frugal Superpower, suggested that fiscal realities would constrain Washington’s adventurism. His latest offering is more pessimistic still. The title, Mission Failure, speaks for itself.

Americans might have gone along with costly foreign adventures, often fought on behalf of others who came off as ungrateful, so long as such excursions didn’t cut into popular domestic spending, or lead to higher taxes. Less able to hide the costs of war through debt, and sensing the public’s fickle mood, but reluctant to shed primacy entirely, Washington has opted for war on the cheap: the light footprint and remote-control warfare. Think baseball umpires calling games from a video control room in New York. (Wait, that happens...)

So far, the consensus in Washington has held. Barely. Trump’s frontal assault on the bipartisan foreign-policy elite has prompted a predictable backlash from those same elites, who have spoken out loudly against him. The real estate mogul is all too happy to fire right back, but, as with so much of his campaign, there is little substance to his attacks.