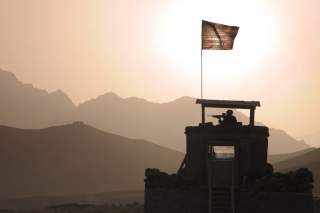 A year on from the election of Donald Trump—which some hoped would usher in a new era of foreign policy “realism” and “restraint” (in contrast to the swashbuckling days of the last Republican administration)—many of those same voices are gravely disappointed. “There is no realism and restraint in American foreign policy in the Trump era,” the editor of The American Conservative, Robert Merry, said at a recent conference.

Others assert things have changed, if only the conversation: “realism is back.”

Rex Tillerson’s State Department has openly downgraded the focus on a defense of human rights internationally, in a huge contrast with the two previous administrations, Obama and Bush 43, which were at times outright dominated by liberal interventionists and the neocons, respectively. Tillerson, on the other hand, has repeatedly argued Foggy Bottom’s principal charge is to be “efficient.” And the X factor of an unprecedented occupant of the White House cannot be overstated: Donald Trump’s administration may be stocked with characters who know how to stick to conventional talking points, but his often-renegade Tweets are also official statements of government policy, no less than the Justice Department has said. And on Tuesday morning, we learned Moscow and President Vladimir V. Putin see it the same way.

Still others are playing a longer game, hoping to begin the process of reorienting how Americans should view their place in the world, and encouraging a new generation of “restrainers.”

“How is it that the national security managers get away with it?” historian and foreign policy intellectual Andrew Bacevich asked at a recent event at Catholic University (CUA) in Washington, DC.

“My answer lies in our collective, self-assigned role in history.”

The event was held by the John Quincy Adams Society—which is “committed to identifying, educating, and equipping the next generation of scholars and policy leaders to encourage a new era of realism and restraint” and the newly inaugurated Center for the Study of Statesmanship at CUA. Both are emerging players, who seek to establish themselves as rivals to more interventionist-friendly outfits like the American Enterprise Institute.

“Here in Washington, in particular… Democrats and Republicans alike subscribe to that sentiment” of a unique, near-providential and irreplaceable role of the United States on the global stage, Bacevich argued. “We hear it, in the repeated references to America as ‘the indispensable nation.’ We hear it in the reminders of the imperative of the United States exercising ‘global leadership’—always and everywhere, there being no plausible alternative.”

Such language is music to the years of paleoconservative writers and politicians such as Patrick J. Buchanan, who has long taken issue with the idea of America as the “first universal nation.”

Some restrainers see bonafide progress. Tucker Carlson’s rise to prominence has been seen as watershed for the movement: the new occupant (like the president) of the most coveted time slot in cable news openly says the Republican-instigated war on Iraq was a fiasco, a generation-defining mistake. Carlson has dedicated good chunks of air time to needling neocons like Max Boot and ultrahawks like Ralph Peters. In my conversations with him, Steve Bannon, the former White House chief strategist often animadverts about the need to restrict U.S. foreign policy to only “vital national interests.”

“Where is all this under Trump? That’s changed,” Tufts University professor Michael Glennon said at the event at Catholic. “For the first time, in our country, the United States, publicly, has seen behind the veil,” of how a lot of this works. But Glennon, for one, worries about some of the American public’s conclusions: he doesn’t believe in the existence of some sort of “deep state,” for instance, a concept that dominated national conversation earlier this year. Another trouble spot could be this emerging coalition will struggle to agree where there is “vital national interest.” Bannon, for instance, is quite hawkish on Iran, with a source close to him last week insisting to me that we already “ARE at war with Iran throughout the Middle East.” Carlson and Buchanan are far more dubious.

Still, some are hopeful a restrainer-leaning alliance structure can cohere. “Am aware of Bannon’s views on Iran, but think it best to focus on persuading Trump that fighting the next neocon war, with Iran, has nothing to do with America First but will do for his presidency what Iraq did for W, in spades,” Buchanan told me last month. “Don’t believe that Trump and his generals—with North Korea hanging fire—can be seriously contemplating a war with Iran right now.”

A concrete step in the right direction for this contingent could be the announcement last week—that went largely unnoticed amidst the increasingly all-enveloping national conversation about sexual violence—that the Department of Defense will be subjected to its first ever audit. In fact, the move has been so hush so far that a source, an advisor the U.S. Army, told me he hadn’t even heard of the audit. “Taxpayers should be encouraged that DOD has finally begun the necessary process of auditing its gargantuan bureaucracy. The Pentagon has done an exemplary job of protecting our national security, but a very poor job of keeping track of how defense dollars are spent,” said Tom Schatz, president of Citizens Against Government Waste. “Since the Pentagon is the largest federal department, the lack of transparency and accountability has made this delay even worse.” Channeling Tillerson, chief Pentagon spokesperson Dana W. White said the move "demonstrates our commitment to fiscal responsibility and maximizing the value of every taxpayer dollar that is entrusted to us." But others have put it more wryly: “Get ready for two years of ‘We didn’t ask for this platform, Congress told us we had to buy it.’”