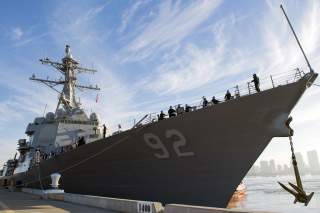 Donald Trump is now the President-Elect. While much of the forthcoming debate will turn on how someone with his glaring deficiencies nonetheless won, his foreign policy potential is unsettling much of the world. Global markets shook dramatically on election night; global public opinion preferred Hillary Clinton by a wide margin. And certainly Trump’s foreign policy ideas were often poorly articulated or off-the-cuff. But this does not mean we should dismiss all he transmitted.

Reading between the lines, Trump has hinted at greater restraint in U.S. foreign policy (when not wildly reversing himself by suggesting that we steal Iraq’s oil, which would require a massive forward U.S. presence.) Trump is the first major political candidate in the United States to do so in the post-Cold War era (Barack Obama partially excepted.) This is both important and a shame, as he is a highly contentious vehicle for such an important discussion. He has somewhat boosted the profile of an alternative discourse on U.S. foreign policy, slowly emerging from the many failures of the war on terrorism. Thinkers such as Barry Posen, Stephen Walt, and Daniel Larison have all sketched possibilities of a less interventionist, less belligerent, less domineering, less expensive U.S. foreign policy. The National Interest has also been a locus for such examinations.

It would be an loss, then, if this debate were jettisoned by Trump in an effort to conciliate establishment Washington, or otherwise condemned by its association with Trump’s campaign behavior. The costs, and meager benefits, of post-9/11 U.S. intervention in the Middle East helped power Obama over Hillary Clinton in the 2008 primary season, and Trump in the 2016 one. A Clinton election would have been something of a restoration of the current liberal/neoconservative interventionist consensus. But the larger agenda of restraint need not mean isolationism, retrenchment, treating the U.S. military as mercenaries, anti-semitism, ignoring treaty obligations, and other explosive campaign allegations. Don’t let Trump taint restraint.

The United States has struggled to define a coherent foreign policy since the end of the Cold War. Global-spanning intervention fit the bipolar world of a global challenger with an aggressive ideology, large population and economy, and powerful military. Communism was indeed a global threat, but those days are long over. None of today’s challenges are so intense.

Islamic fundamentalism is indeed terrifying, but despite high-profile attacks, Westerners are far more likely to be killed or wounded in automobile accidents or weather incidents. Nor is it at all obvious that heavy U.S. and Western intervention in the region has made us safer. We hear this mantra relentlessly, but it is not hard to imagine that we generate backlash terrorism by invading, bombing, torturing in, and otherwise disrupting Muslim-majority states. The United States has spent gargantuan sums intervening in the Persian Gulf Islamic heartland since the 1980s, to no obvious, widely-accepted benefit. Sectarian violence and intrastate instability are arguably worse now than they have ever been. When Trump says we should not defend Saudi Arabia, a country so at odds with our values that it does not even permit women to drive, who can really argue with that?

Russia too is a shadow of what we once faced. Yes, Putin is awful, with outrageous pretentions and a taste for opportunistic shenanigans. But corruption, cronyism, and resource dependence have reduced Russia’s GDP to the size of Italy’s. Surely the European Union, with a GDP nine times greater, can handle such a mild challenge. And if they will not, why it such lackadaisical insouciance the Americans’ fault? Trump is wrong to flirt with Putin, and the United States should not recognize the carving up of Ukraine. But where are the Europeans? During the Cold War, the United States and other NATO allies shared costs at roughly 50 percent apiece. Today, the United States accounts for 75 percent of all NATO defense spending, and there are twenty-seven other states in the Organization. Only four, besides the United States, now meet the designated 2 percent of GDP target for defense spending. How can that be understood as anything other than free-riding?

Finally, China is indeed much greater a player than these other two, and the argument for American forward involvement in the region is stronger here than in Europe or the Gulf. It is especially lamentable that Trump trains his fire on democratic allies like South Korea and especially Japan. But here too, the Trump/restraint critique is obvious. Japan, the world’s third largest economy, spends less than 1 percent of GDP on defense, despite rising antagonism with a near-superpower just across the water. Unless Japan makes a major effort regarding China, the United States, far across the Pacific Ocean, can hardly be expected to do the same. South Korea spends 2.5 percent of GDP on defense, where it would likely spend two to four times as much without U.S. assistance, deterring North Korea. In both cases the United States is fully responsible for defending their sovereignty and national security, which infantilizes their strategic debates. Finally, China is not as obvious a threat as Putin and Islamic fundamentalism are. A Sino-U.S. modus vivendi may still be possible instead of a hegemonic clash.

Critics will note that Trump may not even believe in restraint. His attachment to specific policy beliefs is so tenuous, and his temperament so volatile, that administration hawks may win the day. But let’s not condemn greater caution in U.S. foreign policy by association. There is a debate occurring about US foreign policy - sparked by our trouble in the Middle East, and reinforced by the spiraling human, financial, and civil liberties costs. Don’t let it end by connotation with the controversial new president.

Robert Kelly (@Robert_E_Kelly) is an associate professor of international relations in the Department of Political Science at Pusan National University in South Korea. More of his work may be found at his website here.