A Change of Strategy Is Needed in Yemen 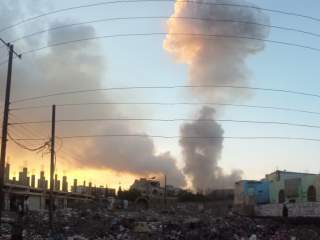 On April 22, 2015, nearly a month into Saudi Arabia’s air war against Houthi rebels in Yemen, Saudi Defense Ministry spokesman Ahmed al-Asiri sounded a triumphant tone. Operation Decisive Storm, the phase of airstrikes by a Saudi-led coalition designed to assist the Yemeni government in weakening Houthi resistance and rolling back their battlefield gains, was declared officially over by the Kingdom.

"The coalition has completed the 'Decisive Storm' campaign at the request of the Yemeni government and the president of Yemen,” al-Asiri stated. “The primary goals of the campaign have been achieved and sovereignty has been protected. We are able to confirm that the Houthis are no longer a threat to Yemenis or neighbouring countries.”

As we all know now, Saudi Arabia’s optimism was premature. Operation Decisive Storm has not only continued over the last nine months, but has intensified. Emirati and Saudi advisors have been deployed into southern Yemen in an attempt to train, advise, assist and fight with progovernment troops seeking to push towards the capital Sana. It is not uncommon for people to wake up to news of dozens of civilian casualties in a bombing raid or an indiscriminate rocket or artillery attack from the Houthis and its allies in the Saleh family. Indeed, in the same period that UN interlocutors have been trying to resuscitate peace talks to end the conflict, another hospital in Yemen was struck by an unidentified projectile—a strike that killed four patients and destroyed a badly needed health facility in a remote location of Saada province.

To argue that Yemen is in the midst of one of the world’s worst humanitarian crises would be a colossal underestimate. Syria is receiving the bulk of the international community’s attention, while the civil war in Yemen barely registers in Western newspapers. According to the latest numbers from the UN, approximately 82 percent of Yemen’s population—21.2 million people—require some degree of humanitarian assistance to get by on a daily basis. Health facilities across the country have reported thirty-two thousand casualties since Yemen’s civil war expanded in March 2015.

Just as disturbing as the casualty figures, however, is the way that the combatants on the ground and in the air have chosen to prosecute the war. Bombs dropped from Saudi warplanes have hit the kinds of civilian targets protected under international humanitarian and human rights law—e.g., hospitals, mosques, breadlines, markets, internally displaced camps and houses. The UN High Commissioner for Human Rights has documented an average of forty-three human rights violations a day—a rate of absolute impunity and unaccountability that reinforces the very kind of warfare that the international community should be working so hard to prevent.

If there is any conclusion one can glean from these horrendous figures, it is this: despite the hard work and dedication of Special Envoy Ismail Ould Cheikh Ahmed, the Saudi-led coalition, the Yemeni Government, the Houthis and supporters of Ali Abdullah Saleh are dragging their heels and delaying a peace process that has been supported by the UN Security Council for well over a year. The international community, led by the Security Council, needs to change its approach and get far more aggressive.

Those states that possess leverage over the combatants must act. Rather than holding periodic meetings on Yemen’s dire humanitarian catastrophe, the Security Council should make far better use of its power under Resolution 2140. Individuals who are hampering the Yemeni peace process and engaging in human rights abuses, regardless of which side they happen to fight on, must have their assets frozen and their travel banned.

More importantly, the United States and the United Kingdom must begin to seriously review their respective policies on Yemen and ask themselves a fundamental question: is the continued selling of arms, ammunition, weapons platforms and smart bombs consistent with their goal of stopping the killing and getting all sides to the negotiating table for a fair and sustainable peace? Using private channels, Washington and London must provide the Saudis with an ultimatum: either cease the indiscriminate and wholesale targeting of civilian infrastructure, or jeopardize a decades-long defense relationship that has allowed Riyadh to acquire the most sophisticated armed forces in the region. The $1.29 billion U.S. sale of nearly 18,000 bombs to the Saudis should be delayed until Washington is confident that the Kingdom is taking their human rights obligations seriously and investigating any and all violations that happen to occur.

The Security Council should also redouble its attention to interdicting supplies, weapons and ammunition destined for the Houthi rebel movement. Any Iranian entity and individual caught sending weapons supplies to the Houthis must be sanctioned and cut off from the international financial system, in line with Security Council resolutions that are already in effect.

If the international community is serious about establishing peace in Yemen and getting all stakeholders to the table, the world must exert maximum leverage on all the parties to compromise and make the tough decisions that are necessary to finally end the war. Perpetuating the status quo is a recipe for further killing.