China Can Have the Philippines 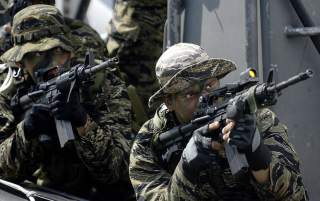 Ever since Douglas MacArthur returned to the island of Leyte on October 20, 1944, the Philippines has been considered a loyal U.S. ally. In 1947, both countries signed an agreement that granted the United States the right to use military bases in the Philippines. Even after rising anti-American sentiment in the 1980s led to the U.S. military withdrawing from Clark Air Base and the Subic Bay naval base in 1992, both countries remained close. And in 2014, the United States and the Philippines negotiated an Enhance Defense Cooperation Agreement that gives U.S. forces access to certain military facilities.

Indeed, the 1951 Mutual Defense Treaty is still in effect today. But in October, Rodrigo Duterte, president of the Philippines, announced his “separation” from the United States in favor of closer ties to China.

So what’s a superpower to do?

In his farewell address, George Washington warned us to “steer clear of permanent alliance.” Similarly, in his first inaugural address, Thomas Jefferson pledged “entangling alliances with none.” So rather than insist that the U.S. alliance with the Philippines is “ironclad” or “indelible,” as Secretary of Defense Ash Carter and Secretary of State John Kerry respectively put it, this is a perfect opportunity for Washington to disentangle itself.

To begin, the Mutual Defense Treaty really isn’t mutual. It’s more like a one-way treaty because the United States doesn’t need the Philippines to be able to defend America. The U.S. military is the most powerful and technologically advanced in the world—not to mention a highly capable strategic nuclear deterrent. Moreover, the United States sits in a relatively secure geostrategic position with friendly neighbors to its north and south and two vast oceans to its east and west.

On the other hand, Manila is highly dependent on the U.S. military since the Philippine military is largely focused on internal security.

Moreover, what the Philippines really wants the United States to do is confront China over territorial claims over Scarborough Shoal in the South China Sea.

From a national-security standpoint, control of Scarborough Shoal does not pose a direct military threat to the U.S. homeland, which is some six thousand miles away. So there is no reason for the United States to risk war with China over it on behalf of the Philippines in a dispute over fishing rights.

The primary U.S. interest is that the sea-lanes remain open and unimpeded for the $5 trillion in commerce that flows through the South China Sea. While there is reason for some concern, Beijing has—so far—not demonstrated that it intends to close the South China Sea to free trade. And it’s important to remember that America is China’s second largest trading partner (after the European Union), so it would be economically risky for the Chinese to imperil those trading relationships.

The Philippines knows it’s no match for the Chinese military. So, instead of continued dispute over fishing rights in Scarborough Shoal, it makes sense for Duterte to find some sort of resolution with China. But that doesn’t exclude the Philippines from having relationships with the United States (or any other country) that are also considered mutually beneficial.

Just because Duterte wants to move closer to China over Scarborough Shoal doesn’t mean reducing or cutting off the nearly $20 billion in trade between Washington and Manila. Nor is it a reason to reduce or cut off more than $5 billion in foreign direct investment by the United States and other countries. Indeed, Duterte has since said, “It's not a severance of ties. What I mean was a separation of foreign policy.”

So if President Duterte wants to take matters into his own hands to ease tensions with China, Washington should let him. After all, it’s in Manila’s self-interest for him to do so and it does not represent a direct threat to America. It’s a false dichotomy to assert that the Philippines must be tied only to either the United States or China. And Washington shouldn’t insist that its relationship with the Philippines exclude Manila from having any relationship with Beijing. The United States itself has relationships with both.

A more normal and rational relationship is one that understands and recognizes overlapping shared interests, but also respects separate self-interests—as long as those divergent interests do not represent a direct threat to U.S. national security.

The United States might have to give up on having permanent bases in the Philippines, but previously losing Clark Air Base and the Subic Bay naval base for two decades did not make it any less of a superpower. Washington has an opportunity to distance itself from an obsolete security alliance that does not make America any more secure—all the while, letting the Philippines take responsibility for its own future.

Charles V. Peña is a Filipino American and a senior fellow with Defense Priorities. He has more than twenty-five years of experience as a policy and program analyst and senior manager, supporting both the Departments of Defense and Homeland Security. Peña is the former director of defense-policy studies at the Cato Institute.