Is China a Playground Bully, or a Calculating State? 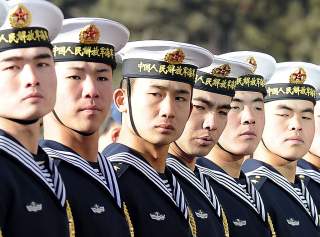 China, Salvatore Babones tells us, has disrespected “Superman”—that is, America—by tugging on his cape—that is, its unmanned underwater vehicle (UUV). Babones suggests three explanations for China’s behavior: a desire to test President-elect Trump, a move on the part of the PLAN to turn the South China Sea into an “internal Chinese lake” and/or a belligerent action flowing out of China’s larger “bully” disposition. Such audacious bullying will continue, he asserts, unless the United States assertively puts China back into its place. Only then can America’s leaders vindicate, “truth, justice, and the American way.”

Babones’s analysis has the virtue of being comforting. Everyone knows that bullies just pick on the weak, and so by standing up to them once, brave resistors can deter future misbehavior. A simple problem has a simple solution.

Yet what if international politics has more to it than some hackneyed playground analogy? What if it involves complex layers of action and reaction, and if there is more to this story than mere “bullying”?

Consider this. By speaking with Taiwan’s president, Tsai Ing-wen, President-elect Trump has signaled he is considering altering the most fundamental basis of U.S.-China relations, the modus vivendi over Taiwan known as the “One China” principle. This agreement, cloaked in ambiguity as it is, has allowed China and the United States to normalize their relations even as the latter continues to sell weapons to Taiwan, which China considers a renegade province. This has been an uneasy agreement, but the important thing is that it has worked, facilitating close economic and cultural relations between the two most important countries in the world. Consequently, it’s safe to assume Trump’s call caused much anxiety in Beijing.

But no, says Russell Hsiao, the director of a pro-Taiwan think tank; Trump’s call really wasn’t that big of a deal, and it doesn’t signal Trump’s willingness to abolish the One China modus vivendi. If the call itself was the only piece of evidence we had, such an argument could be made. But it isn’t. In fact, Trump has surrounded himself with just about the only people in America who think it’s a good idea to revise policy towards Taiwan, by selling it more weapons, increasing diplomatic interaction with it, offering it an explicit defense guarantee, or recognizing it diplomatically. Such advisors include Michael Pillsbury, Peter Navarro and John Bolton, who in fact wrote an op-ed earlier this year advocating that the United States play the “Taiwan Card” and offer Taiwan diplomatic recognition if the Chinese don’t agree to do what America demands.

So we can safely conclude that Trump has sent a signal to China that he is considering revising the modus vivendi at the heart of U.S.-China relations, and this signal is credible because Trump is surrounded by advisors who actually believe this would be a smart move.

If China made no significant response to Trump’s credible signal, that would indicate that China’s leaders were not actually particularly committed to the One China principle, signaling to Trump and his advisors that they can continue to walk back the deal on which the relations of the world’s two most important countries are based, without any serious repercussions. On the other hand, were China to respond too assertively, it might alienate President-elect Trump early on, before he had seriously formulated his policies towards China and Taiwan. A too assertive response, therefore, might actually facilitate what China’s leaders fear.

And so Xi Jinping and his advisors calmly sat down and considered their options, deciding on a low-risk response: the capturing of a low-value U.S. Navy UUV manned by civilian sailors on a noncommissioned vessel. The danger of immediate escalation in response to such a move was almost nil, particularly given President Obama’s commitment to maintaining a positive relationship with China, and China’s decision to return the UUV (presumably made in advance). Even so, the very unexpectedness of the action signaled that China would escalate the situation if, once he had taken office, President Trump continued to threaten the Sino-American modus vivendi.

What, then, has happened to our story of bullying and the necessity of putting China in its place? If the explanation outlined above is accurate, then the sanctimonious discourse on bullying should be cast aside. China’s seizure of America’s UUV was neither about playground aggression nor dominating the South China Sea, but a carefully calculated response to President-elect Trump’s provocation—an American provocation.

Of course, the construction offered above might not be correct. Perhaps the PLAN seized the drone without higher authorization. Perhaps someone thought it was a good idea to risk the most important bilateral relationship in the world for $150,000 worth of nonclassified technology. Perhaps China is run by irrational bullies who took the UUV just because they could. But these explanations, and others like them, are not particularly convincing given what we know about contemporary China.

China would have been a fool not to respond to Trump’s call with Taiwan’s president. That it did is only surprising or provocative to those who conceive of international politics as a children’s playground.