Is China Really That Dangerous? 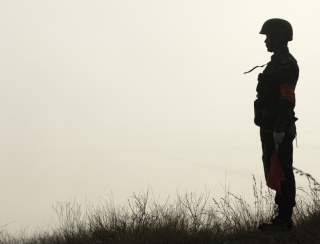 The United States dominates the globe militarily. Washington possesses the most powerful armed forces, accounts for roughly 40 percent of the globe’s military outlays, and is allied with every major industrialized state save China and Russia.

Yet the bipartisan hawks who dominate U.S. foreign policy see threats at every turn. For some, the People’s Republic of China is replacing the Soviet Union as America’s chief adversary. They view another military buildup as the only answer.

The PRC’s rise is reshaping the globe. Today, the PRC ranks second only to the United States economically. Increased financial resources have enabled Beijing to take on a much greater international role.

Of greatest concern in Washington is China’s military buildup. Indeed, a novel reportedly making the rounds at the Pentagon is Ghost Fleet, which posits a Chinese attack on Hawaii.

The Department of Defense publishes an annual review of China’s military. The latest report warns that the PRC “continued to improve key capabilities,” including ballistic and cruise missiles, aircraft and air defense, information capabilities, submarines, and amphibious and airborne assault units. The Chinese military “is also focusing on counterspace, offensive cyber operations, and electronic warfare.” Further, Beijing “continued to modernize and to restructure its ground forces to create a fully modern army.”

This program may sound menacing, but Beijing’s ambitions are bounded. DOD observes that China’s leaders “portray a strong military as critical to advancing Chinese interests, preventing other countries from taking steps that would damage those interests, and ensuring that China can defend itself and its sovereignty claims.” Which is precisely what U.S. policymakers do.

In the short term, Beijing’s principal objective is to advance its territorial claims in the Asia-Pacific without provoking conflict. In the longer term the objective, says DOD, is “to deter or defeat adversary power projection and counter third-party—including U.S.—intervention during a crisis or conflict.” That is, deterrence.

Most important is planning for contingencies in the Taiwan Strait, East and South China Sea, and Korean peninsula. They all concern Beijing far more than America, and involve other, potentially well-armed states, including Japan, South Korea and the Southeast Asian nations, which are able to advance their own interests.

China also is developing a capability for such missions as “sea lane security, counterpiracy, peacekeeping, and humanitarian assistance/disaster relief.” These tasks actually mirror U.S. interests. Washington officials might feel uncomfortable sharing leadership with the PRC, but that cannot justify a military response.

Most important, even the Pentagon does not believe Beijing is planning an aggressive war. America enjoys a vast military lead, possessing a significantly larger nuclear force, ten carrier groups compared to China’s single carrier and much more. With Washington spending roughly $600 billion annually on the military, compared to an estimated $180 billion by Beijing, China is not overtaking America.

Even a more powerful PRC would not easily threaten the United States. Projecting force across oceans and continents is extraordinarily expensive. Deterring use of such force is relatively cheap. America is uniquely secure, enjoying relative geographic isolation—in contrast to China, which is surrounded by nations with which it has been at war over the last century: Russia, Japan, Korea, India and Vietnam.

In fact, only Washington’s attempt to dominate China along the latter’s border (imagine the Chinese navy patrolling America’s East Coast) might trigger war.

The United States understandably favors its friends in their disputes with the PRC. However, they should be responsible for defending their own interests. None of the ongoing territorial controversies is worth conflict with nuclear-armed China.

Unfortunately, deterrence often fails. If Beijing ignores U.S. threats, Washington could find itself in a real war with a real power. Are Americans prepared to sacrifice Los Angeles or San Francisco for Tokyo or Taipei? Doing so would be madness.

Despite the tendency to treat the PRC as the next superpower, Chinese officials are aware of their limitations, tempering any danger to America. Concludes DOD: “China continues to regard stable relations with the United States and China’s neighbors as key to its development.”

The United States should be watchful and wary of China’s rise. But the best way for the United States to prepare for the future is to husband its economic strength and respond militarily only if a serious threat develops. Otherwise, Washington should seek to accommodate, rather than combat such an important rising power.