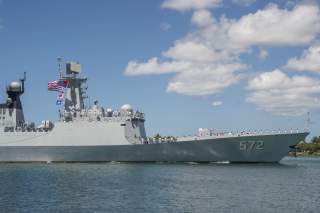 The centenary of World War I in 2014 provided the opportunity for scholars to reflect on parallels between the early twentieth-century Anglo-German rivalry and today’s developing Sino-American rivalry. There is much that must be learned from the road to war in 1914 if the statesmen of today are going to step off the road to Sino-American conflict. Other analogies have also been used in an attempt to understand China’s rise, and I have considered some of these elsewhere.

Yet there is another analogy, which has not yet received the examination it deserves: is contemporary China following in the footsteps of the Japan of the 1930s? Is today’s China bent on expansion like the aggressive Japan that started the Pacific War? This analogy has not received much press—for three reasons.

First, those who are wont to make such comparisons (like former Philippine president Benigno Aquino) tend prefer to default to the Hitler analogy, presumably for the intellectual pull it can exert on Americans always fearing another Munich. Second, given that the current prime minister of Japan, Shinzo Abe, disputes that Japan was responsible for the war (who is he to attempt to define aggression, he asks), bringing up such a sensitive issue is not smart politics for those who desire closer relations with Japan today to contain China. Finally, the academic scholarship on the causes of the Pacific War is much less comprehensive than the corresponding work on World War I and World War II in Europe. Indeed, the number of books based on primary sources explaining the road to Japanese-American conflict published in the last two decades can be counted on one hand.

Given that one possible date for the beginning of the Pacific War is 1937 (the other is the Pearl Harbor attack of 1941), 2017, the eightieth anniversary of that start, is an apt time to reconsider the war’s causes and to compare Japan’s condition then with China’s today. The simplest way to examine the applicability of the analogy is to list the similarities and the differences, and so that is how we shall proceed.

Two similarities between Japan’s geopolitical position in the 1930s and China’s position today immediately come to mind. The first is that both countries expressed dissatisfaction with the military balance of power. The second is that both nations, to varying degrees, felt excluded from international society.

The Balance of Power

In the 1930s, Japan was locked into the so-called Washington System of arms control, which mandated Japanese naval inferiority at certain specified rates (under the 1922 Treaty: 60 percent of American and British strength; under the 1930 Treaty, close to 70 percent). These ratios had been carefully formulated with the intention of preventing aggressive Japanese moves in the Pacific while likewise preventing American or British challenges to Japan’s regional sea control. Even so, many Japanese naval officers decried the limits, seeing them as a way to perpetuate Japanese inferiority. The breakdown of the Washington System in the 1930s led to an arms race between Japan and the United States, and was one of the contributing factors to the outbreak of war between the two nations in 1941.

Today, China is dissatisfied with East Asia’s regional balance of power, which since World War II has been based on American primacy. As former secretary of defense Robert Gates remarked in 2012, the Pacific had “for all practical purposes been an American lake for our navy since the end of World War II.” In the last two decades, China has made tremendous investments in its military capabilities in order to challenge American primacy. China’s challenge has led to increased tensions with a United States determined to hold on to its primacy. In response, the United States has positioned greater forces in the Pacific and developed escalatory plans like Air-Sea Battle (now renamed something innocuous, in an apparent effort to avoid attention). The outcome is a burgeoning arms race between the two nations.

Japan’s precarious position within international society in the 1930s also has some parallels with China’s feeling that it is excluded from international society today. At the Treaty of Versailles in 1919, the Japanese sought to include a racial equality clause. Such a clause was unpopular among many U.S. voters, so Wilson ensured the Japanese effort failed, which the Japanese public interpreted as a national humiliation. Since the 1880s, the United States had been excluding immigrants from Asia, a practice confirmed in the 1924 Asian Exclusion Act. America’s racist immigration policies had long been a burr in its relations with Japan, and their continuance signaled to the Japanese that their nation would not be fully welcomed into international society despite its heroic process of modernization. Japan would not be accepted as a true great power; instead, it was relegated to a position above other Asian states but below the Western great powers.

Today, despite China’s heroic modernization, the Middle Kingdom has not been fully welcomed into international society. It remains excluded from the G-7/8, it is still denied proportional representation in the World Bank and the IMF, and its every action—even those consistent with the contemporary norms of international society—is greeted with suspicion and often opposition from the world’s superpower, the United States. Despite some recent important steps forward—such as the Obama-Xi agreement for ten-year visas—a Trump administration toying with a trade war with China and actions that the Chinese perceive as threatening their sovereignty and national identity seems unlikely to further welcome China into international society. China has two alternatives to full integration into international society as a great power equal to the United States. It could seek to construct a parallel society even as it presses for acceptance in the American-led order, or it could try to tear down the existing society. So far, China seems to be pursuing the first course.

In summary, there are some significant parallels between Japan’s dissatisfaction with the balance of power and its nonacceptance within international society, and China’s dissatisfaction and partial nonacceptance today. In both cases, arms races developed. Yet a key difference is that Japan sought to tear down the existing order, while China today seems to be seeking to construct a parallel order that does not so much conflict with the present order, as serve as an alternative to it. As will be seen in the next section, this is but one of many differences.

The ways in which the contemporary world and China’s rise within it differ from the 1930s and Japan’s rise are numerous, and can be reviewed by looking at the balance of power, economic order, domestic political factors, motives for expansion, international society and technological changes of each era.

The Balance of Power

First and foremost, in the 1930s, the global balance of power was simultaneously undermined by Hitler’s Germany, Italy’s Mussolini, Stalin’s Soviet Union and expansionist Japan. No combination of global powers could oppose the ambitions of all four of these states. When Germany allied itself with Italy and the Soviet Union, the balance of power decisively favored the aggressors. Only Hitler’s foolish invasion of the USSR changed this situation. Today there is no such challenge to the global balance of power. Any state or conceivable combination of states that embarked on regional conquest could be decisively checked by an overwhelming global coalition. Despite the best efforts of alarmists like Aquino, a repetition of the 1930s simply isn’t in the cards.

Attention to the local balance of power reinforces this first point. In 1941, Japan attacked the United States out of desperation. Japanese leaders believed they had a small window of opportunity, and if they missed it, Japan would be always relegated to being a third-rate nation. At the time, a U.S. oil embargo forcefully threatened Japan’s ability to sustain its economy and move its military assets in the future. Furthermore, America’s massive rearmament program, which it launched in the summer of 1940 following France’s unexpected fall, portended a tremendous shift in the balance of power against Japan. As Prime Minister Tojo explained to the president of the Privy Council, Hara Yoshimichi, at the Imperial Conference of November 5:

Two years from now [1943] we will have no petroleum for military use; ships will stop moving. When I think about the strengthening of American defenses in the southwestern Pacific, the expansion of the U.S. fleet, the unfinished China Incident, and so on, I see no end of difficulties. . . . I fear that we would become a third-class nation after two or three years if we merely sat tight.

Windows of opportunity force states to make otherwise undesirable decisions, typically out of fear. Today, the balance of power is currently shifting in China’s favor. This means that China has no incentive to provoke a conflict with the United States in the short term. Indeed, purely by this gauge, it is the United States that has an incentive to attack China, before the regional balance of power comes to favor the Middle Kingdom.