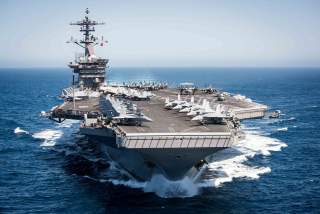 Last April, in the privacy of his estate on the Florida coastline, President Donald Trump and Chinese president Xi Jinping met for a weekend of sun, surf and negotiating. In the middle of the meeting, Trump declared in a short statement outside of his residence that a cooperative U.S.-Chinese relationship had the power to resolve some of the world’s toughest security problems. “The relationship developed by President Xi and myself I think is outstanding,” Trump told reporters. “We look forward to being together many times in the future. And I believe lots of very potentially bad problems will be going away.”

You could be forgiven for thinking that a new dawn in U.S.-China relations was on the horizon. Indeed, Trump and Xi have spoken on the phone on numerous occasions since that weekend meeting, discussing everything from the North Korea nuclear issue and international trade to the South China Sea and the inviolability of the One China policy that has governed Washington’s behavior towards Beijing for about forty years. Unfortunately, Trump has learned the hard way that crafting an improved and productive partnership with China isn’t as easy as picking up the phone and striking up a personal rapport with the Chinese leadership. Notwithstanding all of positive remarks from Trump of Xi being “a great guy,” the Trump administration is quickly coming to the conclusion that the Chinese won’t do America’s bidding unless the White House is able to produce concessions so significant that it would cause a political uproar in Washington. And even then, Beijing may not be willing to deliver.

The problem with great-power relations is that every issue discussed becomes a potential sticking point and carries more significance than it otherwise would. The Trump administration, concerned with Pyongyang’s pursuit of a nuclear and ballistic missile program, desperately needs Chinese assistance to manage a crisis that is only getting more dangerous and immediate. Especially since North Korea recently had its first successful test of an intercontinental ballistic missile that could reach Alaska.

And yet despite the high stakes involved and Trump’s own cajoling of President Xi to get far tougher on Pyongyang than usual, the administration’s time and investment has proven to have uneven returns. It’s not a stretch of the imagination to assume that officials in the Treasury Department are trying to convince the White House that it must get far more confrontational with China than it has been to date. That could perhaps help explain why the administration is losing patience and decided last week to levy secondary sanctions on one of China’s banks.

Gambling that China will cooperate hand-in-glove with the United States on the North Korea file was always going to be a difficult and unlikely undertaking. Whether Trump truly believed in his gut that Beijing would find the political strength to do what it hasn’t done in decades—that is, reorient its North Korea policy in perfect harmony with Washington’s—is anyone’s guess. Cynics would say that this is all part of Trump’s negotiating strategy, providing China with an opportunity to get serious on Pyongyang before unleashing the full weight of America’s economic and diplomatic power.

But whatever the genesis of the administration’s China policy, the White House is arriving at a juncture in the road where it must either accept that Xi Jinping has no intention of breaking with the status-quo or grant the Chinese a few more months to prove that they are indeed interested in being a more constructive player in the game. With Pyongyang’s ICBM bonanza being celebrated by Kim Jong-un as a technical feat of scientific accomplishment, the latter option may be off the table.

The U.S.-China relationship, of course, is too important to the global economy, the diplomatic system and international stability to fail. It would be a mistake of epic proportions for the Washington to turn its back on Beijing completely or to stop collaborating with Chinese colleagues on issues of mutual interest. The two countries have a lot more to gain by working together than they do by ostracizing one another. The Chinese, for example, are just as worried about the spread of jihadist groups and the pull of extremist propaganda as the United States, the Europeans and the Russians. Both have an interest in ensuring that the United Nations system works as it’s intended to work, especially in crisis-prone areas regions of the world where it’s more politically sustainable to send in U.N. personnel to keep the peace than U.S. or Chinese soldiers. There are even commonalities between the United States and China on North Korea’s nuclear program; like Trump and U.S. officials across the national-security bureaucracy, Xi views Kim Jong-un as far more belligerent than his father and grandfather.

Yet for the time being, the differences between the United States and China are outweighing any similarities that do exist. President Trump, who would obviously like nothing more than to create a win-win relationship and a personal friendship with Xi, needs to keep his eyes wide open when dealing with the Chinese. The old recipe of working when we can, fighting back when we must, keeping lines of communication open and keeping expectations low are likely the most reliable guidelines to follow. The last thing that would serve U.S. security interests in the Asia-Pacific region—and in the world in general—is if another country were able to take advantage of the United States simply because administration officials were naive about what they could accomplish.