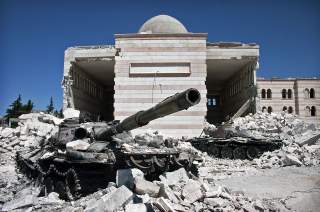 Is Syria finally on the brink of a nationwide peace agreement?

Judging from the optimistic comments from the United Nations, the Russians, the Iranians, and the Turks, it certainly sounds like a real cessation of hostilities—one that holds longer than a couple of days—is in the offing. Moscow, Tehran, and Ankara are packaging their de-escalation agreement reached in Astana as the very beginnings of an historic breakthrough, one that could terminate the most savage war that the Middle East has seen this century.

The major issue with the de-escalation accord, however, is that implementation will prove to be enormously complex. And this assumes that the guarantors of the agreement and the parties to the conflict are even serious about implementing it in the first place.

On paper, the Russia-Turkey-Iran deal looks comprehensive and reasonable. Four de-escalation or “no-go” zones will be created (all of Idlib province, parts of Homs, eastern Ghouta, and some parts of Southern Syria) where the fighting and the bombing will stop. The zones are drawn up to serve as areas where refugees and displaced civilians can live in peace without being killed or seriously injured, and medical aid and humanitarian assistance will be permitted to enter all four of the de-escalation zones without obstruction from any of the warring sides. Observation posts will also be established to keep the government and the opposition groups from shooting at one another.

The main objective of the accord is straightforward: freeze the conflict and provide relief to the Syrian people who have been subjected to horrific violence over the past seven years. In theory, reduced violence will also provide some grist to the mill on the separate diplomatic process in Geneva, where the international community has had no success whatsoever in nudging the Assad regime and the opposition any closer towards a transitional agreement.

U.N. Secretary General Antonio Guterres was cautiously optimistic that the accord could work, as was the U.N.’s special envoy to the conflict, who told reporters, “I think we have been able to witness an important promising positive step in the right direction.”  Even the State Department released a statement indicating that the agreement, if fully implemented, would at least diminish the violence and cool down the conflict.

Such optimism, while understandable, is premature. As the saying goes, “the devil is in the details,” and there are so many details still to be worked out that it’s difficult to believe that this agreement that can implemented by next month. For example:

1.  Will the Syrian opposition participate?:

Representatives of the moderate opposition were not especially pleased that Iran, a nation that has backstopped the Assad regime’s barbarity throughout the entire war, was considered a guarantor. In fact, the opposition delegation was so angry about the arrangement that they walked out just as the agreement was being signed, proof that at least some rebel factions will be reticent to submit to guidelines that have been dictated by two countries—Russia and Iran—that have pummeled their positions and killed so many civilians. If what’s left of the moderates aren’t willing to silence their guns, then de-escalation zones are dead-on-arrival.

2.  What happens if the Syrian regime violates the accord?:

Under the agreement, the Syrian air force is prohibited from operating within these four de-escalation zones. Yet, if there is anything that can be predicted in this very unpredictable conflict, it’s that there will come a time when the Assad regime breaks its word. Bashar al-Assad has signed up to several ceasefires in the past, only to violate them within a few days under the pretext of fighting terrorism. We have no idea whatsoever if Moscow will hold the regime accountable in the event that a ceasefire violation occurs. Do they even have the power to enforce the agreement?

3.  How to fight terrorism in the zones?:

The terms of the deal with respect to counterterrorism are cut and dry.  “The guarantors shall...take all necessary measures to continue the fight against DAESH/ISIL, the Nusra Front, and all other individuals, groups, undertakings and entities associated with Al-Qaeda or DAESH/ISIL…within and outside the de-escalation areas.” Terrorist organizations designed by the U.N. Security Council, therefore, are still fair game.

The problem naturally arises: how does one fight Al-Nusra if that group is operating within one of the de-escalation areas? Separating the moderate opposition from extremist factions like al-Nusra has been a jigsaw puzzle of a mess, and it’s not even clear that moderates want to disassociate themselves from Al-Qaeda due to tactical considerations. This is the same problem that plagued other ceasefires; because jihadist and non-extremist fighters are often operating in close proximity, the Assad regime and the Russians have been able to bomb moderates under the guise of fighting terrorism. It’s a loophole that you can drive a truck through, and the Russia-Turkey-Iran deal includes that same loophole. We can be sure that the Assad regime will exploit it.

4. Will international troops monitor the zones, and if so, how and when?

It’s inconceivable that Syrian troops and opposition fighters will be have the wherewithal and foresight not to shoot at one another across the buffer zones. Similar buffers that were established outside Aleppo last year in order to facilitate the delivery of humanitarian assistance collapsed because there was no trust at all between the combatants. Every cessation of hostilities has been used by one party or another to reclaim more ground or prepare for an assault once the fighting resumes.

It’s very likely that international monitors will need to be placed along these security zones if the de-escalation agreement has any chance of lasting more than a few days. Russian soldiers hold too much baggage for the opposition. The Assad regime would reject U.S. and European personnel to do the job. And U.N. peacekeepers are already stretched thin across sixteen missions around the world. So which country will provide the monitors? Will they be armed? Will they have the mandate to protect themselves? And will all of this have to be authorized by the Security Council?

U.N. special envoy Steffan de Mistura’s valiant efforts in Geneva haven’t amounted to much.  Indeed, the only thing that de Mistura has been able to boast about is that the political negotiations are still going on. It goes without saying that this isn’t a very concrete accomplishment—celebrating the fact that the parties are still talking is like somebody bragging that their car still running. It just isn’t very impressive.

The whole purpose of the de-escalation accord is to freeze the battle lines where they are. As trust is built up, diplomacy over who rules Syria, what the country will look like after the conflict, and when parliamentary and presidential elections can be scheduled will be easier to contemplate.  That’s the theory at least.

The reality is more dire: Assad’s representatives will continue to resist any political transition process that doesn’t allow him to serve out the remainder of his term or to run for re-election. And the opposition will remain adamant that Assad has no place in a future Syrian government. The deadlock—and ultimately the war—will continue for as long those maximalist positions exist.

We shouldn’t brush off de-escalation zones as some minor development. If the plan works, I’ll be the first one to admit that I was terribly wrong. But we also shouldn’t assume that the plan will be successful. There are simply too many questions that need to be answered