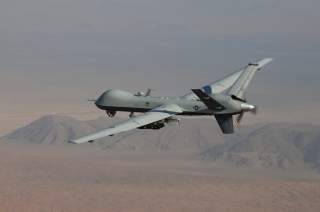 The use of armed drone warfare by the United States has proliferated since 9/11. Advocates of the program say it is essential to American national security. These claims are far from convincing—more on that below. What gets very little examination one way or the other, however, is the effect these operations have on the U.S. personnel that serve within the drone-warfare system, and virtually none on the so-called “collateral damage” inflicted on innocents by errant or mistaken strikes.

That begins to change on Monday night, with the airing on PBS of National Bird, winner of the 2017 Ridenhour Documentary Film Award, a film that beautifully—and hauntingly—illuminates both.

Longtime investigative journalist and filmmaker Sonia Kennebeck was doing research on the drone program in 2013. “I had seen lots of commentary and opinion in media on the subject,” Kennebeck told me in a recent interview, “but couldn’t find a lot of verifiable facts or reactions from people directly involved.” The more she discovered, the more fascinating she found the subject matter, and the greater her interest in broadening the scope of the project. There came a key moment, however, when she realized the project deserved to be more than simply an opinion article.

One of the subjects of the film, Heather (only first names are used in the documentary), had recently left the Air Force after serving as an intelligence analyst in the drone program. “When I met Heather the first time she told me not only had she’d struggled with suicide because of all she had seen and experienced, three of her former Air Force colleagues from the program have already taken their own lives. At that point I knew I had to do a film,” Kennebeck explained.

As the documentary details, Heather struggled mightily after she left the Air Force because of the role she played in the deaths of numerous people that were killed in drone strikes. Very often, she explained, when targets were killed with the missile, many people around them were obliterated, body parts flying in all directions. The film also featured the experiences of two other American operators, Daniel and Lisa, who suffered trauma similar to Heather.

One of the reasons Kennebeck produced this film was to shine a light on aspects of the program that get little to no public exposure. “The public needs to understand how many people are being killed,” she said, “what countries drones are being operated in, and ultimately there needs to be more regulation because the technology has outpaced our legal and moral frameworks. Policy and rules need to catch up.”

The drone program’s efficacy in attaining U.S. security objectives desperately needs to be assessed. Advocates of drone warfare virtually dismiss the problems without examination, and instead focus on what they cite as the compelling justification. A Brookings report in defense of drone warfare argued that the United States “cannot tolerate terrorist safe havens in remote parts of Pakistan and elsewhere, and drones offer a comparatively low-risk way of targeting these areas.” Like other reports advocating the use of drones, the Brookings study cites the body count as evidence of success.

“U.S. drones have killed an estimated 3,300 al Qaeda, Taliban, and other jihadist operatives in Pakistan and Yemen,” the report’s authors claim. What is not addressed, however, is the extent to which these operations reduce terrorist threats to the United States. By any rational assessment, the terrorist threat has continued to dramatically increase—not decline—as the use of drones has risen. If more than three thousand Al Qaeda terrorists had been killed, we should have seen a serious degradation in their capability and a corresponding increase in our security. Instead, Dr. Michael Shank, professor at New York University’s Center for Global Affairs, has considerable experience on the ground in the locations where many drone strikes occur, and provides a sobering on-the-ground perspective.

“Working in Somalia, Yemen and Pakistan, it’s clear that drones are creating more enemies than the U.S. claims to ever kill,” Dr. Shank wrote in a recent email message. “Drones are quickly turning the general population – many of whom the U.S. would classify as the ‘good guys’ – against America.”

The United States generally considers its enemy population to be a finite number of bad people that can be eliminated, he explained, but such thinking exposes a limited understanding of physics (for every action there is an equal and opposite reaction) and psychology. “For every so-called ‘bad guy’ killed by a drone strike,” Dr. Shank wrote, “there will be another person who witnessed that strike and who is motivated to assume the newly dead adversary’s antagonism.”

National Bird provides a moving example of how American drones impact those we otherwise seek to defend. In 2010, the United States admitted it accidentally struck a three-vehicle convoy in Afghanistan with Hellfire missiles and rockets that it mistakenly thought was affiliated with the Taliban. Instead, the vehicles contained mostly members of an extended family—twenty-three of whom were killed in the attack, including a number of children—that had no relation to the insurgency. There is a telling moment in the film when the surviving members are sitting outside, telling the story of that day, when helicopters happen to fly overhead. Their faces immediately register palpable fear as they relive that harrowing moment.

The drone program as currently operated in the United States is in need of a complete overhaul. American citizens deserve to be protected and defended by our government, and that must never change. But when the instrument that government and military leaders use to accomplish that goal instead causes serious emotional damage to the citizens operating the equipment, kills and alienates those we wish to protect overseas, and perversely creates more enemy fighters than it ever removes from the battlefield, dramatic changes are required.