Confronting Assad's War Crimes: The Next Step for America 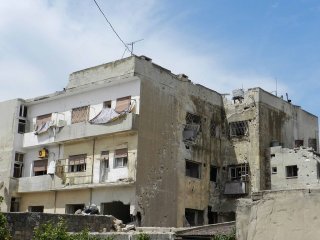 Donald Trump is taking his time to assemble his cabinet and his national security team, but the world isn’t stopping for him. In fact, the world doesn’t stop for anyone.

This is especially so for the Syrian people, who have been terrorized, starved and besieged by their own government over the last six years. Bashar al-Assad may be an evil and cunning man, but he isn’t stupid; he grasps the political reality in the United States and understands that folks in Washington are too distracted to do anything significant about Syria. The two months when one administration hands power to another isn’t the best time to rock the boat and change policy.

After a halting of airstrikes on eastern Aleppo for nearly a month, the Syrian Air Force has returned to the skies with a vengeance. It’s not uncommon for hundreds of airstrikes to be conducted across Aleppo’s eastern district on a single day, a rate that translates roughly into a couple of strikes every hour. At least three hundred civilians have been killed in these bombings since the Assad regime’s offense restarted, after Moscow called off its moratorium on air activity over the city.

The Syrian government has targeted the last few working hospitals in the city deliberately, no doubt as a way to further put the squeeze on the eight thousand rebel fighters still ensconced in the area and to convince east Aleppo’s 250,000 residents to either surrender to the government’s authority or die. Doctors Without Borders reported that the hospitals and medical facilities it supports have been hit on thirty separate occasions since the regime offensive resumed. Bashar al-Assad, for all intents and purposes, continues to spit in the face of the entire United Nations system—as he has done throughout the war.

There is an important and healthy debate going on in Washington about whether it’s a wise course of action for the United States to plunge deeper into the conflict. But whichever side one is on regarding that question, surely we can all agree that transitional justice and accountability for the world’s most heinous crimes is an essential component of any future resolution to Syria’s civil war.

The United States took a giant leap forward earlier this month towards a possible international war crimes prosecution of Syrian military and intelligence officials after the conflict subsides. For the first time, the United States’ UN ambassador, Samantha Power, publicly released the names of six Syrian commanders who either lead or direct units of the Syrian Armed Forces that have shelled schools, destroyed hospitals, dropped chemical weapons on civilians, tortured and executed prisoners, and imposed starvation sieges on entire city districts. While acknowledging that these commanders won’t be hauled into a courtroom to answer for their crimes anytime soon, Power reminded the Security Council that Charles Taylor and Slobodan Milosevic felt the same way. And looked what happened to both of them.

Power is right. Thanks to Russia being a protective power on behalf of Bashar al-Assad, there is no chance whatsoever that the Security Council will refer Syria to the International Criminal Court for a full investigation. Indeed, France already tried that route in 2014, having submitted a draft resolution that would authorize the ICC to begin rounding up evidence for a potential prosecution (that effort failed, due to a joint Russia-China veto). Establishing a special court similar to the international tribunals for Rwanda, Yugoslavia and Sierra Leone would also require action by the Security Council, which is about as divided as it has ever been since the Cold War.

But just because Moscow and Beijing are refusing to go along at the present time doesn’t mean that advocates for international justice, with U.S. assistance, can’t get the ball rolling, by acquiring evidence and taking testimony from victims for use in prosecutions down the line. There is a wealth of evidence already collected by the independent Commission for International Justice and Accountability, the highest-profile of which includes the gruesome cache of pictures from a former Syrian military photographer that reveals emancipated detainees in the Assad regime’s detention system. But the more information that is found and the more testimony that human-rights attorneys are able to get from victims and witnesses, the greater likelihood that a solid prosecution against Assad and his generals will survive in The Hague.

As soon as members of the House of Representatives returned to Washington from their campaigns, they passed the Caesar Syria Civilian Protection Act by voice vote. Support for this legislation in the House was so bipartisan that the bill’s sponsors chose to suspend the normal rules, knowing full well that it would pass easily. Among other provisions, the bill would authorize the State Department “to provide assistance to support entities that are conducting criminal investigations” for a possible war-crimes prosecution in the future. Before Congress leaves town early next month, the Senate ought to send this bipartisan bill to President Obama’s desk, and the president should quickly sign it into law.

Syria is a complicated mess, where local and sectarian warfare is fueled by proxies that hate each other just as much. Uncovering, documenting and preserving massive evidence of war crimes and crimes against humanity by the Syrian government—and all parties to the conflict—however, is about the only thing that doesn’t require a long debate.