Congress Is Ignoring Its Most Important Constitutional Duty 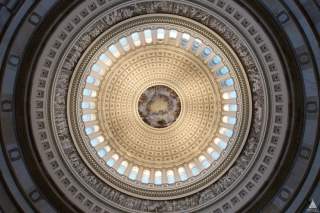 According to the United States Constitution, Congress has the responsibility—not merely the ability, but the obligation—to declare war, raise and support armies, and to “make rules for the government and regulations of the land and naval forces.” As a body, the U.S. Congress has abdicated this crucial responsibility. This is not only a shame to the legislators but a disservice to the American people.

Fortunately, not every member of the House of Representatives fall into this category. This past Thursday a bipartisan group of seven Representatives held a press conference on the Capitol grounds to publicly encourage their colleagues to debate the deepening US military involvement in the greater Middle East.

Rep. Barbara Lee (D-CA) and other legislators have filed amendments to the 2017 National Defense Authorization Act (NDAA) in an effort to force a broad congressional debate, especially related to the war against the Islamic State (ISIS). It’s not simply that Congress hasn’t debated the use of force in the war against ISIS. It’s that as a body they actively resist such debate.

“The American people,” Rep. Lee said, “deserve better than a Congress that abdicates this sacred responsibility.”  Rep. James McGovern (D-MA), who also attended last week’s press conference, called out his fellow representatives in a 2015 speech noting the House was “willing to send our troops into danger; we’re willing to spend billions upon billions of borrowed money for this war; but we’re not willing to carry out our Constitutional duty, the same Constitution we keep asking our troops to put their lives on the line to protect?”

The President and other Administration leaders say the ongoing military mission against ISIS is necessary to ensure the security of US citizens. Many in Congress believe the war is not being waged effectively, or shouldn’t be fought at all. The American people deserve to hear the arguments of both in an appropriate forum so they can make up their own mind.

There are crucial questions that voters deserve to have answered before they decide whether they should continue supporting the war: what are the threats posed by the Islamic State?  What is the Administration’s proposed political, diplomatic, and military strategy to defeat the threat?  How much will it cost?  How long might it take?  What is the continued risk to our troops if war is supported and is the expected result worth their lives?  Are there valid alternatives to using lethal force to ensure American security?  If military means are deemed necessary, what level of force would be necessary, what concrete objectives would be given the military, and what would success look like. Otherwise, how would we know if the mission was a success or failure?

Today the American public knows the answer to none of those questions.

Current U.S. policy is that we employ lethal military power in airstrikes and drones against enemy targets, order secretive operations by special forces, and deploy training and advising troops to friendly forces in Iraq and Syria. We don’t know the airstrikes are intended to accomplish (or if they’ve been effective to date). We don’t know what outcomes the special forces are trying to achieve, nor what the measures of success the Administration set for the advisors in their mission to train Iraqi and allied fighters.

In other words, a small group of men and women in Washington are conducting a war without oversight by the rest of the government or the consent of the people in whose name they are there to serve.

What possible justification can Congressional leadership proffer for their unwillingness to even debate the matter?  As a four-time combat veteran, I wholeheartedly agree with the need for operational security and not telegraphing the details of our missions to our enemies. No one is suggesting a public debate should discuss operational matters. What is very much needed, however, is for Congress and the Administration to explain the reasons they contend the deployment of military force is in our national interest.

The Constitution demands that Congress protect the interests of the people by being the sole branch of government to declare war. How then, can that body outright refuse to publicly debate the current war, forfeiting their power to the sole discretion of Executive branch?  Voters elect representatives and senators to fight for their interests in Washington, not to passively enjoy the perks of their office. The time has come for the Congress to execute its constitutional responsibilities and fulfill its obligations to the American people.

Daniel L. Davis is a widely published analyst on national security and foreign policy. He retired as a Lt. Col. after twenty-one years in the U.S. Army, including four combat deployments, and is a member of the Center for Defense Information's Military Advisory Board. The views in these articles are those of the author alone and do not reflect the position of the U.S. government. Follow him on Twitter @DanielLDavis1.