Congress Needs to Take War Powers Back into Its Own Hands 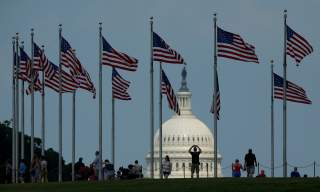 If last week’s report from the Associated Press is to believed, Secretary of Defense James Mattis is preparing to send President Donald Trump a request for an additional four thousand U.S. personnel in Afghanistan. Ordinarily, a request such as this would be debated thoroughly by the National Security Council staff and the Principals Committee, which would then attempt to find a consensus on the troop request before delivering their final recommendation to the president. In the world of Donald Trump, however, Secretary Mattis has been afforded the weighty power and responsibility to make that decision by himself—Mattis has, for all intents and purposes, been delegated Commander-in-Chief authority to give the final orders.

Given that the country is on the eve of yet another U.S. military escalation in a sixteen-year war that could very well last another sixteen years, now is the time to look back and review how the United States began operations against Al Qaeda and the Taliban in the first place.

The story here is straightforward; after the United States experienced the worst act of mass violence against civilians in its history on 9/11, Republicans and Democrats in Washington came together for love of country to provide then-President George W. Bush with the congressional authority to use military force against the terrorist group that conducted the attack and the government that sheltered it. The sixty-word Authorization for Use of Military Force (AUMF) has been seared into our brains for the last sixteen years, and has served as a legal crutch for the last three presidents to fight the war on terrorism without the hassle of going back to Congress for additional authority.

What’s good for the executive branch, however, hasn’t been good for the power and prerogatives of the legislative branch—nor has it been good for the country as a whole. The 2001 AUMF, a resolution whose language was specifically tailored towards the perpetrators of the 9/11 attacks, has been interpreted over the last decade and a half as something far different. It is a gift that keeps on giving, a legislative catch-all that apparently encompasses any Sunni jihadist organization on the planet. In minds of executive branch lawyers, franchises and associated forces, and associated forces of associated forces, are all included in the resolution. Even the Islamic State, an organization that competes with Ayman al-Zawahri’s Al Qaeda for power, money, manpower and influence in the jihadist milieu, is apparently an associated force of Al Qaeda—despite the fact that the two groups have been fighting each other in Syria for the last three years.

Over the years, the 2001 AUMF has been a double-edged sword for lawmakers of both parties who have voluntarily handed their war powers over to the president. On one side, because the resolution can be extended to include new terrorist groups in other countries, lawmakers have been able to avoid the hardest issue that they would have to tackle under the U.S. Constitution: whether to send the country to war. Regrettably, avoiding a debate about war and peace also means that legislators from both parties haven’t given the American people what they need and what they deserve: a national discussion on the state of the war effort; whether the strategies that the United States has pursued are in fact effective in mitigating the threat; and whether the benefits have been worth the tens of thousands of U.S. military casualties and lord knows how much taxpayer money.

So far, the 115th Congress hasn’t done a thing to move the war debate from the fringes of Washington to the middle of America. AUMF’s have been filed and press conferences about the necessity of reasserting Congress back into the war debate have been scheduled, only to be forgotten a week later. Bipartisan resolutions that are written to shake Congress out of its coma have been buried by the congressional leadership as unnecessary or unwise. Indeed, there’s always an excuse for not acting; it’s not the right time, an AUMF won’t pass due to political polarization, the president already has the authority he needs to prosecute the war on terrorist…take your pick.

One man in Washington, however, has the power to change the direction: Sen. Bob Corker.

The Senate Foreign Relations Committee, the committee with primary jurisdiction over writing war authorizations which Corker chairs, has a full work period ahead of them after the summer recess. Corker has the seniority, the gravitas and at least some amount of respect from the Democratic caucus to kick-start an effort that a more polarizing bomb-thrower in the Senate wouldn’t be able to start. As the Chairman, Corker possesses the power to schedule an AUMF hearing (which he did last week), and he’s in the fortunate situation of having a majority of his colleagues on the committee sympathetic—if not totally supportive—of marking up a new war resolution. Indeed, he’s indicated that it’s time for the Foreign Relations Committee to mark-up some of the AUMF’s that have been filed. Presumably, those mark-ups could occur once the Senate chamber returns from its summer break.

If this is the course that Bob Corker wants to set, he’d be doing the entire country a service.

Image: Flags fly at the Washington Monument, as the U.S. Capitol is seen at rear, on Flag Day in Washington, U.S., June 14, 2017. REUTERS/Joshua Roberts