Could America Pull Troops Out of South Korea If It Wanted? 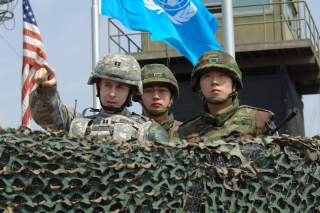 Today the world waits to see whether toughened sanctions, hard nose diplomacy, and even exchanges of nuclear ‘red button’ threats have worked to persuade Kim Jong-Un to give up his nuclear arsenal.  At the very least, these Administration initiatives appear to have played a major role in prompting what will be a remarkable summit conference between Kim Jong-Un and President Trump.

Precedent exists.  Some countries have given up nuclear weapons development programs voluntarily.  South Africa and Brazil did so, but those decisions were prompted more by the establishment of new democracies, not out of fear of imminent attack by a foreign power or diplomatic and sanctions pressure.  After the break up of the Soviet Union, Ukraine, Belarus, and Kazakhstan also gave up their nuclear arsenals, returning them to Russia. (Ukraine may regret that decision today.) Meanwhile, the jury is still out on Iran as the agreement provides for a ten-year freeze, not the permanent elimination of nuclear weapons development.  The fact that the United States has just announced that it will be pulling out of the accord adds further uncertainty as to whether Iran will ultimately continue to pursue nuclear weapons or not.

War also remains an option, but one that carries with it devastating consequences, making it uncertain whether any U.S. administration will ever take that route.  The historical precedent for war to rid nuclear weapons is limited. In 2002, the United States invaded Sadaam Hussein’s Iraq to rid it of weapons of mass destruction, including nuclear, but it was eventually discovered that there were none to destroy.  One positive by-product, however, of the invasion was that it did cause Libya’s Qaddafi to voluntarily give up his nuclear program out of fear that the United States would next attack him. Any benefits of that precedent were then muddled when the U.S. supported the overthrow of Qaddafi, likely giving other dictators, including Kim Jong-Un, pause on the idea of ever giving up nuclear weapons voluntarily. Two last examples of a military option are Iraq and Syria, whose nascent nuclear facilities were struck in bombing strikes by the Israeli Air Force before either country was far along in a weapons development program.

All this shows that the historical record for persuading a dictatorship to give up nuclear weapons voluntarily is not promising, barring a change in government or an early military strike before any program is far along. The United States has been imposing sanctions on North Korea for over six decades.  While tough diplomacy, sanctions, and an impending summit conference may ultimately succeed, the odds against that also have to be acknowledged as real.

An important question then remains:  what can the United States do if Kim Jong-un remains defiant in the face of diplomatic pressure and sanctions, a summit conference fails, and the U.S. must at least weigh other options, other than going to war?

The historical context, going back to the 1953 Korean War armistice, weighs on any consideration of alternative options.  At the time of the 1953 Armistice, South Korea was one of the world’s most impoverished countries with $64 per capita income, comparable then to the poorest countries in Africa.   Hostilities had destroyed the economy, leaving millions dead, and families traumatized and separated. As ominous, South Korea’s military was utterly incapable of defending the country from another North Korean attack.

The United States had to step forward and provide the military shield to protect South Korea from another invasion. Over the last 68 years, that shield has become permanent with generations of U.S. servicemembers serving in South Korea, backed by a Korean command structure that is firmly institutionalized in U.S. military organization and culture.

During the same swath of time, however, South Korea has achieved an economic miracle, going from one of the poorest to one of the world’s wealthiest countries.  Its economy for 2017 was the world’s eleventh largest with a GDP of $1,538,030 trillion, according to the IMF. Meanwhile, if North Korea has gone anywhere, it is backward.  The North’s economy is in the dark ages with a GDP colossally smaller than that of South Korea, at best the size of Anchorage, Alaska, approximately $25 billion. Population wise, as well, there is no contest.  At 54 million, South Korea is twice as large as North Korea

During the Cold War years, overall U.S. troop strength in South Korea ranged from as high as 75,000 to 44,000.  Today, the United States Forces Korea Command, headquartered just below the DMZ in Seoul, continues to remain formidable with over 23,000 military personnel permanently stationed in South Korea, supported by hundreds of aircraft and armor.  The Army’s Second Infantry Division maintains an aviation brigade (equipped with AH-64 Apache Longbow helicopters) and an artillery brigade in the South for initial defense against any invasion by the North. After Germany, South Korea is the third largest host of American troops in the world.

Like its economy, the South Korean armed forces have also come a long way since 1953.  Their numbers exceed over 625,000 active personnel, with highly trained reserves of 5,202,250.  South Korea’s military has been rated as the seventh most capable in the world. In fact, the active South Korean Army, at 560,000-strong, is larger today than the entire United States Army at roughly 475,000 active duty troops.

And unlike the multiple challenges the U.S. Army faces around the world, South Korea’s Army focuses exclusively on one, over-riding priority:  to repel any North Korean attack along the 160-mile border separating the two countries. To mount that defense, South Korea has over 400 advanced fighters including F-16’s and F-15’s, with F-35’s to come; more than 400 attack aircraft; 2,600 plus advanced combat tanks; over 3,400 armored fighting vehicles; and more than 5,000 artillery pieces.  South Korean made K-2 Black Panther tanks, K-21 infantry fighting vehicles, and K-9 Thunder self-propelled howitzers form the core of its mechanized infantry’s capabilities. Moreover, South Korea’s Army trains relentlessly and hard for defense against any North Korean surprise conventional attack.

It is fair to ask whether, after more than 65 years, an absolute military necessity still exists today for maintaining over 23,000 U.S. troops in South Korea for initial defense.  Much has changed during the last six decades, but the policy that the United States must maintain a large military presence in South Korea has remained an immutable principle of U.S. national security strategy.  While some might insist that for purely military reasons the South still needs and depends upon certain U.S. conventional warfare capabilities, it is fair to ask in response whether such capabilities could not be shifted to South Korea’s armed forces over a term of time, certainly a few years or less?

On paper, North Korea’s one million man active military force appears formidable, but it is doubtful that the North could swiftly overrun and conquer the South even were the United States to no longer maintain its current level of troop strength on the Peninsula to help cope with an initial attack.  Outdated equipment, limited logistical capabilities, and reports of starving North Korean troops, ransacking farmer homes searching for food, hardly supports the image of a juggernaut force. It is unlikely that North Korea could repeat anything close to 1950 and almost overrun the South Korean military before the tide of battle could be turned with the arrival of American air power and other conventional forces, even if the United States no longer had a full 23,000 troops permanently stationed on the Peninsula.

While the objective military necessity for keeping substantial U.S. troop presence in South Korea likely passed years if not decades ago, U.S. foreign policy did not evolve with these shifting balance of power realities on the ground.  Ironically, the United States today finds itself pinned to maintaining a major military conventional presence in South Korea, not so much out of military necessity, but more because it must maintain its credibility, not just in South Korea, but in the entire Asian region as a Pacific power.

Particularly now when some wonder whether the United States is returning to isolationism, any withdrawal of U.S. troops from South Korea could be viewed as a strategic retreat from the region and a foreign policy victory for North Korea and China.  The United States appears strategically pinned down. The dynamic of the confrontation has also changed. North Korea and the United States today find themselves in a direct nuclear standoff that has no immediate bearing on the original purpose for U.S. presence in South Korea—to protect it from conventional attack by the North.  The United States demands that the North must de-nuclearize, with warnings that “all options” are on the table if it does not. Ironically, the historical basis for U.S. troop presence in South Korea has become a sideshow, overshadowed by the nuclear confrontation between the North and the United States.

The current dynamics do, however, create an opportunity for the United States to reassess its position on the Peninsula and to take more realistic account of the significant adjustments in the military balance that have occurred in the region over the last sixty-eight years, both the increased military capabilities of South Korea and the rise of China.