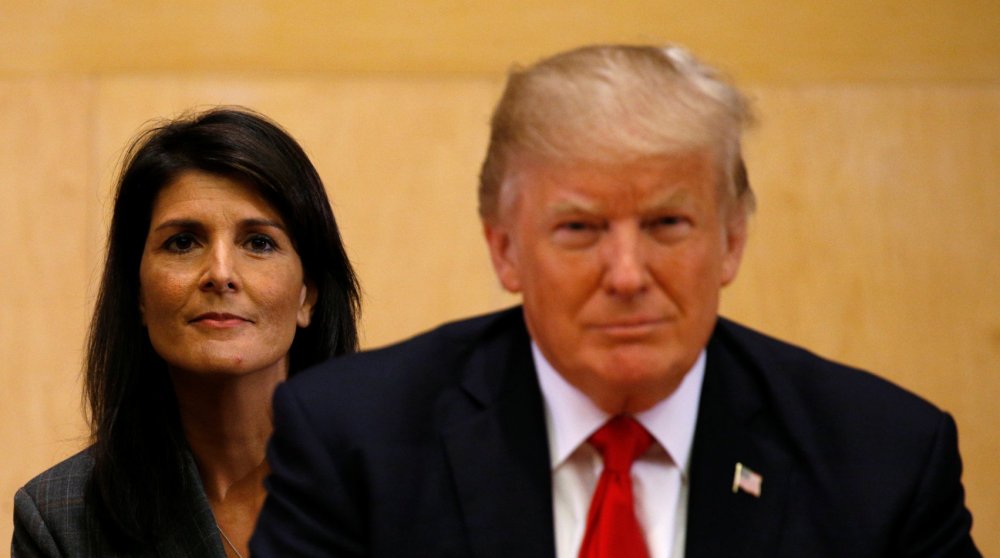 It’s no secret that Donald Trump is one of the most self-absorbed occupants of the Oval Office in recent decades. So perhaps it isn’t surprising that his response to a growing series of protests in cities across Iran has been to assume that they are related to his own foreign-policy approach to Iran, railing against President Obama’s nuclear deal, and pointing out that “the U.S. is watching!”

Yet the president is wrong; Iran’s protests are not about America. Instead, they are the result of years of structural economic problems, poor governance, corruption and domestic political disagreements. And Trump’s policies—from the travel ban to his looming threat to rip up the nuclear deal in mid-January—are the wrong way to deal with it. Far from strengthening protesters, these policies are more likely to hurt than to help.

The president is not alone in his fixation on American importance in Iran’s future. Vice President Mike Pence, made a similar assertion in a recent op-ed, arguing that “the last administration’s refusal to act ultimately emboldened Iran’s tyrannical rulers to crack down on dissent.”

Meanwhile, a veritable cottage industry of experts has sprung up, implying in their arguments that the only thing standing between Iran and a peaceful, pro-American government is a lack of U.S. leadership. Still others argue that Trump should take the opportunity offered by the protests and mid-January sanctions waiver renewal deadlines to kill the nuclear deal.

Nothing could be further from the truth. In the first place, experts largely agree that the Iranian protests are mostly unrelated to the regime’s approach to the United States. Certainly, these protests do seem to draw from a different segment of Iranian Society than the 2009 Green Movement: younger and more working class.

These protesters are not—as the administration appears to believe—calling for regime change or a pro-American foreign policy. Iranian politics today may not be democratic, but the country has a long history of domestic civil society participation. Today’s protesters are not seeking U.S. leadership; they are demanding that their own government address their political and economic grievances.

Secondly, American support is rarely—if ever—a positive thing in the context of Iranian domestic politics. There is simply too much negative historical baggage for any mainstream group in Iranian politics to want U.S. support. Trump’s tweets are already being used by the regime to suggest that these protests are illegitimate and U.S.-sponsored, weakening their appeal inside Iran.

Worryingly, despite his professed concern for the protestors more broadly, Trump’s own policies towards Iran are far more likely to hurt than help the Iranian people. Just seven days into his presidency, his now notorious travel ban has barred all Iranians from entering the United States. Presumably this includes protesters and victims of human-rights abuses—exactly the people that Trump and his vice president both claim to want to help.

The administration’s hard-line on Iran has also been counterproductive. In June, it was reported that Trump’s CIA director, Mike Pompeo, was setting up a new mission center with the goal of “turning up the heat on Iran,” a move which for Iranians conjures unpleasant memories of prior covert interventions. Meanwhile, Trump’s wavering on the Iran nuclear deal has increased uncertainty, slowing investment into Iran.

Indeed, one of the reasons for today’s protests is that the Iranian population has not yet seen the promised benefits of the 2015 nuclear deal. It is certainly true that the Rouhani government oversold the potential economic benefits of the deal for Iran’s moribund economy, but Trump’s promise to rip it up has worsened prospects for the Iranian economy.

Worse, if the president withdraws from the deal in mid-January by allowing sanctions waivers to expire, then he will weaken the protesters and strengthen Iranian hardliners, who have always been able to use the idea of “external enemies” to suppress domestic dissent.

None of this implies that the United States should not support the Iranian people in their quest to make their government more representative and more accountable. But the Trump administration’s self-centered approach to the crisis—assuming that protests are pro-American, or that the United States has a role to play as a savior—risks undermining the protesters and worsening the odds for reform.

For change to come to Iran, it must come from the Iranian people, not from the United States. The Trump administration and its supporters would do well to remember that.