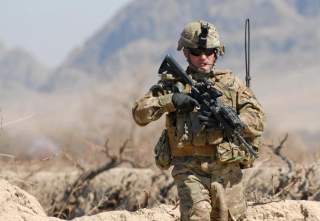 It is news to no one that Congress is filled with cowards.

The Constitution places the power to declare war with the legislative branch. This does not mean simply taking note that the president has bombed or invaded another nation. Congress decides whether there will be a war to fight. Constitutional Convention delegate James Wilson explained: “It will not be in the power of a single man, or a single body of men, to involve us in such distress; for the important power of declaring war is in the legislature at large.”

In recent decades, however, members of Congress have preferred to leave the hard decisions to the president. If the war went well, they applauded. If not, they criticized. This constitutional abdication has allowed unilateral warmaking, and presidents have been only too happy to oblige.

The only contrary example in recent years was when President Barack Obama tossed the issue of Syria’s use of chemical weapons to Congress. Americans overwhelmingly told their lawmakers to reject military involvement in yet another bitter Middle Eastern conflict. Republican hawks were overwhelmed by their own followers.

Yet the president has relied on the outdated authorization passed after the terrorist attacks of 9/11 to validate his multiple air and drone campaigns, as well as deployment of trainers, advisers and special operations forces. Obama almost certainly does not believe that the old AUMF (Authorization of Use of Military Force), directed against those who plotted the World Trade Center and Pentagon attacks, has any relevance in today’s world. But he may fear that Congress would make a bad situation worse.

If H.J. Res. 84, “Authorization for Use of Military Force Against Islamist Extremism”, is any indication, Obama would be right in that assumption. Sponsored by Rep. Scott Perry (R-PA) and cosponsored by Rep. Matt Salmon (R-AZ) and Rep. Cynthia Lummis (R-WY), the bill creates a long list of target “organizations that support Islamist extremism”, many of which have done nothing against America. It is a strikingly foolish piece of legislation.

First of all, a country normally declares war against entities, not philosophies. Usually the enemy is another nation. In today’s world, that might be applied to a group. But war involves destroying states, dismantling organizations and killing people. It does not entail criticizing ideologies or theologies. What matters is not whether a group is Islamist, but whether it endangers America.

Secondly, the threat to America and other nations is violent extremism, not extremism itself. It doesn’t particularly matter if people have kooky ideas if they do not kill, maim, kidnap, torture and otherwise harm others. One best avoids rather than executes them. Had Adolf Hitler remained a deranged street artist in Vienna, the United States would have had no cause to target him despite his hideous views. War became necessary when Hitler became Germany’s chancellor and put armored divisions, and more, in support of his opinions.

Lastly, war should be reserved for responding to threats to America, not cleaning up messes in other nations’ neighborhoods. During World War II, Washington declared war on Japan and Germany, then later on Italy, Romania, Bulgaria and Hungary. All were fighting against America or its allies; Congress did not pass a resolution against fascism. Spain chose not to enter the conflict, despite dictator Francisco Franco having received support from Germany and Italy during its civil war. The Franco regime might have been evil, but it posed no security threat to America. Other governments might have been considered fascist, but Washington had no cause to attack them.

Yet Representatives Perry, Salmon and Lummis came up with numerous new enemies, along with the kitchen sink: “the Islamic State, Al Qaeda, Al Qaeda in the Arabian Peninsula, Al Qaeda in the Islamic Maghreb, Al Shabab, Boko Haram, Al Nusra Front, the Haqqani Network, the Taliban, Houthis, Korasan Group, Hamas, Hezbollah and any substantial supporters, associated forces or closely related successor entities to any of such organizations.”

Why stop there? Surely there are a few more insurgents, dissidents or factions that could be tossed onto the list. Why not Abu Sayyaf in the Philippines? They’ve kidnapped Americans and the United States has sent in military personnel to train the Filipino military. China assures the world that the Muslim Uighurs are terrorists, so why not add them? What about the Pakistani Taliban, which differs from the forces operating in Afghanistan? At Islamabad’s behest, the United States already has used drones against the former. Certainly Russia’s Chechens, who without question have committed atrocities against civilians, belong on the list. There undoubtedly are more.

The proposed choice of enemies well illustrates the problem of U.S. foreign policy. ISIS should be on the list because it is the current focus of military action in the Middle East. But it did not turn to terrorism against America or Europe until Washington and its allies took over the fight against the caliphate. Terrorism has become ISIS’s only effective weapon of retaliation. Had Washington left the battle to those in the region threatened by the Islamic State—essentially everyone, from Turkey to Iraq to Egypt to Saudi Arabia—the group likely would be devoting its terrorist energies elsewhere.

Al Qaeda remains an enemy, but not much of one after nearly fifteen years. Moreover, by supporting Saudi Arabia’s brutal campaign in Yemen, Washington actually has weakened the forces against Al Qaeda and opened space for the ISIS, allowing both of them to expand their influence. Supporting one foolish war apparently makes another one necessary, in the three Congress members’ view.

Al Shabab is essentially a criminal gang operating in Somalia. It is made up of nasty folks, but they have little to do with America. The African Union already has militarily intervened in Somalia. There is no reason for the United States to take on responsibility for war on yet another continent.

The same rationale applies to Boko Haram, the vicious Islamic insurgency in Nigeria. Not every evildoer on Earth is America’s problem. Indeed, Boko Haram has won popular support because of the corruption, human rights abuses and incompetence of government forces. If anything, America declaring war on the group would reduce pressure on Abuja to reform. Moreover, U.S. involvement would aid Boko Haram in portraying itself as battling the enemies of Islam.

The Al Nusra Front and Khorasan Group are seemingly associated with Al Qaeda, but are actually focused on the civil war in Syria. Ironically, they are on America’s “side” in that conflict and have benefited greatly from U.S. arms surrendered by so-called “moderate” insurgents. While Washington has good reason to hope the two groups are defeated by friendlier regime opponents, or even by the Assad government, they have not attacked the United States. The best military policy in Syria is to stay out.

The Haqqani Network and Taliban are America’s opponents in Afghanistan. However, Washington long ago fulfilled its primary objectives in that tragic Central Asian nation—dispersing Al Qaeda and punishing the Taliban for hosting anti-American terrorists. The latter aren’t likely to commit that mistake again, meaning the United States should withdraw from its forlorn attempt at nation-building and democracy-promotion in Central Asia.

Far from being Islamic extremists, the Houthis were known for religious moderation and are a Shia variant close to Sunnis. The group has never targeted Americans. However, the Houthis have been fighting Yemen’s central government since 2004, and gained military ascendency after allying with former President Ali Abdullah Saleh, whom America long supported. The Houthis never have been controlled by Iran. It is Saudi Arabia—a totalitarian state which allows no religious liberty—which has turned the conflict into a sectarian struggle. Outside observers report that Riyadh is responsible for the bulk of Yemen’s civilian deaths: Washington would be more justified in declaring war on Saudi Arabia, which continues to promote fundamentalist Wahhabism around the globe.

Hamas is a malign organization, but has no global ambitions and does not threaten America. Israel is well able to confront its far weaker adversary. Washington should not declare war on countries, movements or groups just because an allied power might wish it to do so.

Hezbollah also is no friend of Israel, but is not a military enemy of America. Although blamed for the 1983 attacks on the U.S. embassy and Marine Corps barracks, exact responsibility is unclear. The organization was only emerging at the time and was not fully formed until 1985. Indeed, Israeli Prime Minister Ehud Barak admitted that it was his nation’s military “presence that created Hezbollah.” In any case, in 1983 the United States had become a combatant in Lebanon’s multisided civil war and bombed Islamic forces. Washington could not then claim immunity from attack. To target Hezbollah today also would put America at odds with the Lebanese government—the one Middle Eastern nation with a substantial Christian population, which exercises significant political power.

America has been at war every day since Congress passed the AUMF after the 9/11 attacks. The result had made America less safe, creating new enemies and triggering new conflicts. Yet Representatives Perry, Salmon and Lummis would authorize open-ended military action against a host of new groups that are not currently at war with the United States. The threat of terrorism would grow accordingly.