In Defense of James Comey 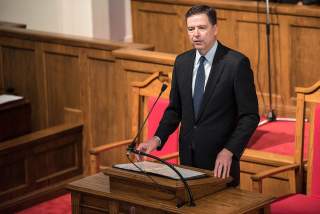 Alberto Gonzales resurfaced the other day. The former Bush-era attorney general, elusive since he stepped down in 2007, was on cable news, casting aspersions on the FBI’s very public recommencement of its investigation into Hillary Clinton’s emails. Of bureau director James Comey, Gonzales said, “I worry that in this particular instance, he has made an error of judgment in releasing this letter, which really says nothing.”

Gonzales knows errors of judgment. He committed a lot of them. His tenure was dogged by constant controversy, from his dismissal of allegedly disloyal U.S. attorneys to his latitudinous definition of acceptable interrogation techniques. Trumping all that was his involvement in what we’ll refer to as the hospital incident, a sinister bit of espionage in a Bush administration bureaucratic war that not only tarnished Gonzales’ reputation, but also introduced the world to Comey, then the assistant attorney general.

It began with a murder board meeting in 2004. In attendance was a delegation from the Bush Justice Department that included Comey and Jack Goldsmith from the Office of Legal Counsel. Staring them down were top intelligence officials, Vice President Dick Cheney, and Cheney’s Rottweiler attorney David Addington. The DOJ had concluded that the president’s warrantless wiretapping program was illegal and the rest of the executive branch wanted answers. Comey explained his reasoning. No lawyer, he stressed, could approve of surveillance operations as were currently allowed.

“Well, I’m a lawyer, and I did,” snarled Addington.

Cheney and Addington believed it was the president’s sole prerogative to set policy throughout the executive branch, but still, allowing the Justice Department’s to abstain would have made the program appear lawless. They decided to confront Attorney General John Ashcroft, in George Washington Hospital where he was having his gallbladder removed. Comey learned about this impromptu meeting and sped towards the hospital. “It was a stock scene from Hollywood’s Washington,” writes Barton Gellman in Angler, his masterful biography of Cheney. “[M]en in their forties and fifties, stamping on the brakes, abandoning double-parked vehicles, and running up a hospital stairwell as fast as their legs could pump.”

Comey, Goldsmith, and another DOJ appointee Patrick Philbin arrived at Ashcroft’s bedside; shortly afterwards, Gonzales and Card walked in with an envelope. Comey braced for a confrontation, but then Ashcroft sat up feebly in bed. Not only was he not going to sign an extension, he said, but he regretted having ever authorized the wiretapping program in the first place. “There is the attorney general,” he said, gesturing to Comey. Card and Gonzales backed off, but much of the administration was still arrayed against the DOJ. Comey made out his resignation letter, as did several other law enforcement officials, and waited.

It took a personal meeting with the president, who had been kept entirely out of the loop, to persuade Comey to stay and sideline Cheney so the surveillance initiative could be brought in line with DOJ requirements. The Bush administration avoided its very own Saturday Night Massacre. But the hospital incident is more than just a gripping story; it tells us two important things about Comey. First, despite being a Republican (he’s since changed his registration to independent), he was willing to humiliate a GOP administration if it meant preserving the DOJ’s integrity. And second, he was happy to discuss the episode, both in blistering 2007 congressional testimony where he described himself as having been “angry” over the incident, and later, to the press, and to Gellman.

Comey is now back under the klieg lights. Some have accuse him of being a Republican partisan--a cheap smear given his valiant stand against the Bush consensus. Others depict him as an ACLU-minded hero, and while he did temporarily gum up government surveillance, he also has a long history of civil liberties abuses, which Trevor Timm has documented. Still others see him as an incompetent naïf, unaware of how his bombshell could singe the presidential race. But he’s not. He’s savvy to the press, an operative by necessity, with the biases of a lawman and the survival instinct of a Washingtonian.

There’s little question Comey’s email missive was influenced by forces outside the law, including the leak-happy swarm of apparently furious FBI agents underneath him, and the possibility that Republicans could crucify him after the election if he didn’t provide full disclosure. He was in a rough and unenviable spot, not for the first time. But whereas he came out of the hospital incident glowing with heroism, he’s now been cast in the role of the villain, even if his only crime was to enlighten voters that the frontrunner is under investigation--a rather important detail.

The question now is, will Comey’s image as a buttoned-up sheriff with contempt for politics survive this brouhaha? You can bet that he cares about the answer.