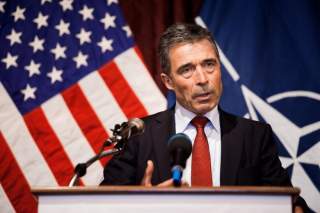 Denmark is a shrimp in the European ocean. A pleasant place to live, it is a geopolitical nullity. No one much cares what the Danes think about the world because, they can’t do much to change it.

Of course, not unless they gain control of another nation’s military, most notably, that of the United States, the biggest whale around. The last NATO Secretary General, Anders Fogh Rasmussen, hailed from Denmark, which has 17,200 citizens under arms.

That position did not allow him to deploy the American military. But it did give him unusual influence over U.S. policy. (Rasmussen’s successor, Jens Stoltenberg, is from Norway, which is a little larger, spends a little more on the military, and has a few more citizens in uniform. But, fundamentally, it isn’t that much different from Denmark).

Even as the American people tire of paying the cost of solving other nations’ problems, shrimps are pushing the whale to stay the course. Politico recently interviewed Rasmussen, a former prime minister of Denmark. He sounded like an American neoconservative in promoting an “American-led world order”—at American expense, of course.

While Rasmussen claimed that he was not taking sides, his greatest fear appeared to be that Donald Trump might be elected and end Washington’s unique global role. “What is at stake here is the American role as the global superpower,” Rasmussen argued.

He agreed that Europeans should do more on behalf of their own defense. Rasmussen was hopeful that 2015 would be the nadir for military expenditures by NATO’s European members, but even he acknowledged that the rise “is very slow” and “of course we always wish for more.” However, he offered no strategy to make serious and permanent increases a reality.

Rather, Rasmussen was horrified by Trump’s suggestion that Washington might not defend those nations that did not do more to defend themselves. Rasmussen complained that it “would undercut the solidarity within the alliance.” Solidarity which, alas, is not evident when most European states consciously free ride off of Americans.

Rasmussen also was critical of Trump’s desire for better relations with Russia. Not that Denmark has any real interest in the issue. In a conflict the Danes would do little to defeat Moscow. Come the clash of armored divisions, air strikes on heavily defended targets, and exchange of nukes, Copenhagen likely wouldn’t be involved.

Rasmussen complained about the GOP platform change to eliminate a pledge for military aid to Kiev. He worried: “The West risks losing a democratic Ukraine by undermining our support for the country.” But when did “the West” gain Kiev, which is badly divided politically and culturally? Is the prospect of a “democratic Ukraine,” whatever that means in practice, worth war with Russia? And war fought by every NATO member, including Denmark, and not just Washington?

Indeed, he argued, if “America were to disengage from Europe, then you would really risk Russia increasing her influence,” which would result in “a more hostile Europe.” Is the continent really that weak, inconstant, foolish, and self-destructive? Europe is vastly more capable than Russia—with ten times the GDP, three times the population, twice the military outlays, and greater political stability—and should be able to protect itself from whatever mischief Vladimir Putin plans.

Moreover, Europe is much freer and a far more attractive society. There is a reason Mideast refugees head for Europe, not Russia. America’s economic, political, and cultural ties would remain strong even if the United States no longer garrisoned the continent. If the Europeans are so unfaithful that their loyalty can be procured only by a promise to relieve them of the burden of defending themselves, Americans are better off leaving now.

Yet Rasmussen is prepared to be quite generous with U.S. lives. He criticizes Donald Trump’s “America first” slogan as being “out of touch with what is actually the role of the United States,” which is “the world’s leader.” As a superpower America “has special obligations. As the world’s only superpower, you cannot afford to say ‘America first.’” Really?

Rasmussen believes that Washington has “a special obligation to maintain the world order and promote peace.” Indeed, it is America’s “destiny” to lead. (I keep hearing Darth Vader in Star Wars telling Luke Skywalker that it is his destiny to join his father on the dark side of the Force.) If the United States does not act as a world leader, then “weaker powers will try to exercise their regional influence,” such as Russia, China and ISIS.

This sounds like the practiced gambit of a con man, who knows flattery is the surest means to success. At the end of World War Two, only the United States was able to bolster war-ravaged friends, uplift former foes and confront the Soviet Union. But that world disappeared in 1989, if not before. America’s populous and prosperous allies benefit equally if not even more than America from today’s international system. Collectively, they possess larger economies and populations than America. They can do much to “maintain the world order and promote peace,” and especially to constrain regional troublemakers.

While whining about the threat posed by Russia, Rasmussen never explained why European governments had failed so abysmally in the most important test since the end of the Cold War. Most Europeans have little interest in spending more on the military, deploying troops in the easternmost NATO members, or confronting Moscow militarily over Ukraine. If America takes the “leadership” role Rasmussen desires, most Europeans never will support doing any of those things.

Rasmussen tried another rhetorical tactic, one common with American neoconservatives. He argued: “it’s in the United States’ interest to actually prevent conflicts while they are still manageable and small, instead of waiting and seeing them grow bigger,” when “it would be much too expensive for the United States to actually keep the lid on all the boiling conflicts.”

Again, one wonders why only America should act to keep “the lid on” in such cases. A quarter century ago the Balkans was in flames. That impacted Europe. It had no serious effect on the United States. Wasn’t it in Europe’s interest to act?

What American intervention gives rise to such a hope? Vietnam? Iraq? Somalia? Haiti? Libya? Kosovo? Yemen? Afghanistan? The results have been uniformly bad, often disastrous, leading to successive interventions to fix problems created by the previous effort. Better a few “boiling conflicts” than to be constantly scalded while unsuccessfully trying to hold down the lid.

Nevertheless, America must be the global policeman since “we don’t have any other,” Rasmussen declared. The cost to Americans obviously doesn’t matter. Rasmussen said, “I would ask the next president of the United States to exercise determined American global leadership,” which apparently means making constant war.

At least Rasmussen is nonpartisan in spreading the blame. He charged President Barack Obama with being “too reluctant to use American force to prevent and solve conflicts around the world.” It is the president’s refusal to use the military that has resulted in “autocrats, terrorists and rogue states” being more influential. Seriously.

What world does Rasmussen live in? President Obama finished the Bush occupation schedule in Iraq, twice increased forces in Afghanistan and delayed his own withdrawal plan, intervened in Libya, mounted sustained drone campaigns in Pakistan and Yemen, launched a war on ISIS in Iraq and Syria and backed Saudi Arabia in its brutal campaign in Yemen. What more should Washington have done?

About all that is left is Syria, but does Rasmussen really believe that there was something useful to do, the United States knew what to do, the American people would support what must be done, and the end would be peace and stability rather than years more of conflict? Even more bizarre is his belief that China, Russia, and terrorists would go away if only America exercised “global leadership.” Unless Washington is prepared to go to war with nuclear-armed powers over stakes which are minimal for America but great for them, such challenges are inevitable. And intervention creates rather than eliminates terrorism. Failure to intervene more promiscuously did not create either Al Qaeda or the Islamic State.

The fact that someone with Rasmussen’s extreme and unrealistic views played an influential role in NATO is another argument against the alliance. Indeed, people like him help explain the rise of people like Trump. Indeed, what is more likely to provoke a reaction in America than being lectured by leaders from small countries like Rasmussen’s Denmark or Stoltenberg’s Norway, countries that contribute little to the alliance and take more militant positions (increasingly at the behest of even smaller and more vulnerable states in NATO’s east)? In a post-Brexit world, there may be little appetite for lessons from a NATO bureaucratic elite that shows little gratitude to America for its role in Europe and in fact speak as though they are entitled to receive U.S. protection despite risking little themselves.