Despite Video Scandal at State, Iran Deal is Working 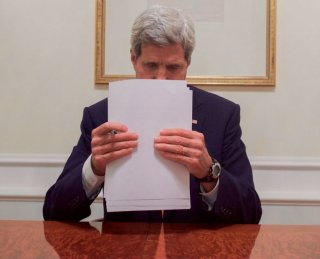 One of the most challenging jobs in Washington is to be a government or administration spokesperson. State Department spokesmen John Kirby and Mark Toner have had that lesson reinforced over the past week.

The subject that has gotten the State Department press corps in such a foul mood is a State Department admission that a senior official in the Public Affairs bureau ordered a technician to edit the video of a December 2, 2013 daily press briefing given by former spokeswoman Jen Psaki. The affair would not have gotten so much coverage if it weren’t for the fact that the unedited and undoctored version of the video directly contracted a previous statement from State officials that there were no secret, bilateral U.S.-Iran talks related to Tehran’s nuclear program. It turns out that this was a falsehood: the discussions, contrary to earlier comments from Victoria Nuland (who was the department spokesman at the time), Washington did in fact dispatch officials to meet directly with the Iranians in an exploratory phase of what would eventually culminate in the P5+1-Iran negotiations a year later.

For some reason, an individual in the Public Affairs Bureau found it necessary to cover that fact up — either out of embarrassment that the department in fact lied to the press or over a concern that posting Jen Psaki’s full appearance on December 2, 2013 on the department’s website would provide congressional Republicans with more ammunition to make the administration’s negotiations with the Iranians even harder to pull off.

Whatever the reason happened to be, the video editing has turned into a scandal for the State Department, even after all this time. The AP’s Matt Lee, Reuters’s Arshad Mohammed, and Fox News’ James Rosen (who asked the original question to Psaki during that daily briefing) have been peppering State officials with very legitimate questions as to how someone in the State Department could order a subordinate to doctor a video in the first place. The State Department has handled this incident terribly and has only made matters worse; the explanation from Mark Toner that “[t]here was no existing policy or regulations in place that would have been violated by editing this video” strikes those following this story as negligence on the part of those with decision-making authority in the department. CNN’s Jake Tapper was incensed that something like this could actually happen in an administration that bills itself as “the most transparent in history.”

Republicans on Capitol Hill are also attempting to get in on the action. House Foreign Affairs Committee Chairman Ed Royce sent a letter to the Inspector General requesting that he open a formal investigation in order to find out who ordered the tampering and why the State Department didn’t investigate this matter months beforehand. House Oversight Committee Chairman Jason Chaffetz wants any and all documents “referring to or relating to the deletion of video footage” from Secretary John Kerry. All of these requests are within the purview of Congress’s role as overseer of the executive branch and are absolutely within their rights as an independent branch of government.

Republicans aren’t doing themselves any favors by linking the video scandal at the State Department with the Iran nuclear agreement at large. Speaker Paul Ryan has already sent out a statement suggesting that the video flap is yet another illustration of the Obama administration deceiving the American public and conducting itself like narcissists in the hope of protecting their signature foreign policy achievement—the Iran nuclear deal. The kerfuffle at the State Department, Ryan’s office wrote, “is further evidence that the administration would stop at nothing to ram through this dangerous agreement against the will of the American people.”  Sen. Tom Cotton — the most vociferous and vocal critic of the Iran nuclear agreement — has been given yet another opportunity to keep what he considers a terrible deal in the headlines.

And here is where Republicans are overreaching.

There is no question that the State Department has handled this entire episode poorly. What was originally referred to as “a glitch” in the video turned out to be a deliberate act of sabotage from a lone individual who allegedly had no approval from the State Department’s leadership. How the State Department didn’t have any rules governing these kinds of activities seems ridiculous. Of course, we still don’t know who this alleged individual is or whether he or she would be disciplined if the department eventually discovers the person who gave the order. Secretary Kerry himself described the whole episode as “stupid and inappropriate.”

Yet none of this can make up for the fact that the Iranian nuclear agreement—despite how much congressional Republicans may despise it or find it unwise for U.S. national security—is working precisely as it was intended. The IAEA’s latest quarterly report confirms that, four months into the agreement, Tehran is abiding by its commitments and doing everything it needs to do to meet its end of the bargain.

Cotton and his fellow Republican colleagues have every right to demand answers about the video. But all of the huffing and puffing in the world cannot create the alternative reality that they hope Americans will buy into.