Diplomacy, Not Force, Was the Best Choice With Iran 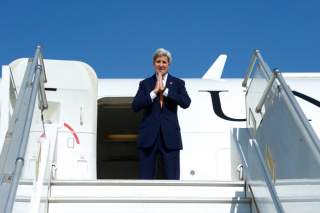 On July 14 of this year, President Barack Obama and his administration celebrated by marking the one-year anniversary of the Iranian nuclear agreement's signing—an accord that has caused as much divisiveness in Washington as the Affordable Care Act. President Obama and Secretary of State John Kerry both marked the anniversary with personal statements: “the Iran deal,” Obama wrote, “has succeeded in rolling back Iran's nuclear program, avoiding further conflict and making us safer.” Secretary Kerry made similar remarks: “as of today, one year later, a program that so many people said will not work, a program that people said is absolutely doomed to see cheating and be broken and will make the more dangerous, has, in fact, made the world safer.”

Whether or not one believes the Iranian nuclear agreement (otherwise known as the Joint Comprehensive Plan of Action) was a principled stab at diplomacy or a political exercise that endangered U.S. national security depends on where one sits. Not one Republican lawmaker voted to approve the JCPOA when the accord was debated in Congress, but 93 percent of the Senate Democratic caucus assessed that the agreement was the best that Washington and its allies could do given the circumstances.

Unfortunately, the central lesson of the saga concerning the Iranian nuclear agreement on its first anniversary is being overlooked. And the lesson is this: when chosen as an option and invested by the United States government, good old-fashioned diplomacy is often the only thing standing in the way of further conflagration and armed conflict.

Diplomacy with good friends can all too easily devolve into shouting matches. But diplomacy with historical adversaries across multiple generations is an even more odious task. As has been made all too clear by the endless rounds of negotiations between the Israel and Palestine, India and Pakistan and the Syrian government and its opposition, resolving disagreements and grievances by talking can be an exhausting affair. In the case of the Israeli–Palestinian conflict, negotiations can all too often collapse into violence, generating even greater animosity and making it more difficult to build trust and resurrect the peace process at a later date. Before the JCPOA, American, European and Iranian diplomats were talking past each other, refusing to compromise on their core positions and heading home with nothing to show for the effort besides enormous headaches and heartbreak. The Iranian nuclear deal only happened after multiple breakdowns in the process, years of internationally imposed sanctions on Tehran's economy, and once a new Iranian president was elected, nearly two years of negotiating behind closed doors.

The point is not to espouse the virtues of the JCPOA or give the Obama administration a Nobel Peace Prize. The purpose, rather, is to demonstrate that in the case of Iran, the United States and their European, Russian and Chinese partners calculated that it was far safer for regional stability and for the world at large to exhaust every single diplomatic option before broaching the subject of an air-campaign on Tehran's nuclear program.

Unfortunately, Americans have seen what can happen when bilateral or multilateral diplomacy is not embraced as an option. In November 2002, the UN Security Council passed Resolution 1441 requiring the regime of Saddam Hussein to cooperate fully and unequivocally with the UN inspectors investigating Iraq's nuclear weapons research program. The resolution was as clear as international diplomats could be: “the Government of Iraq shall provide to . . . full, and complete declaration of all aspects of its programmes to develop chemical, biological and nuclear weapons, ballistic missiles, and other delivery systems . . .  including . . . the locations and work of its research, development and production facilities, as well as all other chemical, biological, and nuclear programmes, including any which it claims are for purposes not related to weapon production or material.”

Four months later, when IAEA inspectors reported that Saddam Hussein wasn't disarming or abiding by the numerous Security Council resolutions that were on the books since the conclusion of the Gulf War in 1991, the Bush administration decided to abandon another opportunity to use UN diplomacy in favor of the beginning of military operations. The United States, President Bush told the American people, had waited twelve years for Saddam Hussein to comply with UN resolutions, and it was time for the United Nations to finally disarm his regime for good. If the Security Council was not willing to enforce its own resolutions, Bush argued, the United States would be required to take the initiative to not only ensure that the American people are protected, but to defend the credibility of the UN as an institution.

History need not be rewritten, but to list a few of the the results is appropriate. There was a premature jump to military conflict; profound hubris that the United States could instill a democratic government in the Middle East; poor military planning of what would be needed to pacify a nation of 26 million Iraqis; a strategy predicated on the equally poor assumptions that military victory would be quick and decisive. And, of course, the Iraqi people would come together despite their society's sectarian and ethnic cleavages.

In the end, the invasion of Iraq in 2003 was the end result of what occurs when diplomacy is not afforded maximum time and space. The Iran nuclear deal in 2015 resulted in just the opposite: a negotiated resolution to an international nuclear crisis that could very well have devolved into air strikes, thousands of casualties and a whole set of unintended consequences that nobody could predict.

The American people are incredibly fortunate to have the most technology superior, professional, knowledgeable and courageous military force on the planet. But before that military is unleashed, America's equally professional and knowledgeable diplomats should expend all their energies to solving the problem.