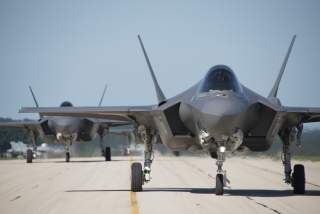 In the ongoing debate over U.S. grand strategy, one of the key points of discussion is the strategic utility of permanently stationing American forces abroad. Overseas U.S. bases are often thought to be the frontline forces in any outbreak of conflict. We must continue to maintain an indefinite global military base presence, we are told, so that if conflict erupts in any critical region, our forces can get there quickly to stabilize the situation. But a forward-deployed posture has lost much of its operational value in terms of contingency responsiveness.

Even during the Cold War, the service rendered by troops in Europe was more about deterrence and to guarantee U.S. involvement in a conflict, not to be particularly useful in battlefield scenarios. As President Dwight D. Eisenhower once commented in reference to the 1958-59 Berlin crisis, “If resort to arms should become necessary, our troops in Berlin would be quickly overrun, and the conflict would almost inevitably be global war. For this type of war, our nuclear forces were more than adequate.”

A RAND Corporation report on basing posture reiterates this point for today: “the forces that are forward-deployed are not sufficient of themselves to address conflicts of every scope.” Indeed, “after the initial phase of operations to stabilize or even resolve a situation, the response by the U.S. military to a contingency of any substantial size will come primarily from forces deployed from bases in the United States.”

In other words, forward bases are useful mainly for rapid deployment of lighter forces in emergency situations. Anything beyond minor stabilization missions requires reinforcements from the continental United States. What’s interesting about this insight is that thanks to revolutionary technological advances in military capability, transportation, and communications, according to RAND, “lighter ground forces can deploy by air from the United States almost as quickly as they can from within a region.” So for any contingency that truly warrants U.S. intervention, we should be able to handle both minor and major deployments by relying on bases at home.

The bottom line is that forces can deploy to virtually any region fast enough to be based in the continental United States. An armored brigade combat team can get from Germany to Kuwait in approximately 18 days, only about four days quicker than if it deployed from the east coast of the United States. As the RAND report explains, “The movement and time advantages for moving light and medium [brigade combat teams] from overseas compared with [the U.S.] by air is minor.”

To get a sense of how much things have changed over the years, consider that, “during the first three weeks of the American buildup to the Gulf War,” according to Kent Calder, “the United States moved more troops and equipment than in the first three months of the Korean War.” And that was a quarter century ago. Capabilities have continued to improve mightily since then.

According to the basing expert Robert Harkavy, “the development of longer range aircraft and ships, plus the development of techniques for aerial refueling of planes and at-sea refueling of ships has had the effect of greatly decreasing the number of basing points required by major powers to maintain global access networks.”

Think about our ability to fly bombing missions from a transcontinental distance. In the Gulf War, the U.S. flew B-52s from Barksdale Air Force Base in Louisiana to conduct bombing raids against Iraq in round-trip missions that exceeded 10,000 miles and took only 30 hours. In 1999, the U.S. Air Force conducted attacks against Serbian targets from the United States. In the initial operations against Taliban-held Afghanistan in 2001, B-2 stealth bombers based at Whiteman Air Base in Missouri flew 44-hour missions with the help of aerial refueling capabilities “without using any bases in the vicinity of Afghanistan at all,” according to Calder.

Admittedly, U.S.-based deployment would not be as convenient as with a forward posture. The transit time to the Taiwan Strait, for example, for a carrier strike group deployed from Yokosuka, Japan would take 3 to 5 days, whereas deployment from the West Coast would take up to 16 days. However, those transit times can be mitigated with sufficient basing capacity in Hawaii (about 12 days) or in port at the U.S. territory of Guam, which would allow transit times comparable to that of Yokosuka, Japan.

But the loss of any transit time conveniences also has to be balanced against the increased vulnerability of forward-deployed military forces. As technological innovation has made forward-deployed forces less necessary logistically, it has also made them more vulnerable.

The development of extremely accurate intermediate- and long-range ballistic missiles and cruise missiles, integrated air defense systems, and modern satellite-based sensors, among other innovations, make overseas bases exceedingly susceptible to asymmetric attacks that are very difficult to defend against. China, in particular, has invested heavily in these capabilities, meaning a large percentage of overall U.S. facilities – over 90 percent of U.S. air facilities in Northeast Asia - are within high-threat areas. The People’s Liberation Army’s conventional theater-strike system, the DF-21, “can hit all military facilities along the entire Japanese archipelago.” These weapons and others like them “could cripple an airbase, incapacitate an aircraft carrier, and devastate concentrated ground forces.”

Not only do anti-access/aerial denial capabilities make overseas U.S. bases more vulnerable, they also undermine the deterrent effect of a forward-deployed posture by weakening the credibility of a rapid response. As RAND Corporation analyst Michael J Mazarr recently wrote, “Primacy is operationally infeasible in an age of A2/AD.”

One of the prominent arguments in favor of maintaining an indefinite overseas military presence for purposes of contingency responsiveness is that it is too difficult and time-consuming to secure permission for access from host governments in the middle of a crisis situation in which U.S. forces are needed. This concern is overstated. To begin with, contingency access is always conditional on host government permission. Basing agreements typically stipulate that the U.S. must consult with host nation governments before conducting any non-routine operations. But more to the point, we have historically not had trouble securing basing access in wartime. Indeed, the U.S. has been able to add new operating facilities overseas for every major conflict over the last 40 years.

For any contingency important enough to warrant U.S. intervention, forces can be deployed to any region from offshore within a reasonable time frame. And if a crisis situation does require establishing overseas bases, we can do so rather quickly. The reduced ability to consistently engage in military exercises, freedom of navigation operations, or constant drone flights is an acceptable loss of contingency responsiveness given the new vulnerabilities to forward bases and the fact that an offshore posture would benefit overall U.S. interests by encouraging allies to contribute more to their own defense and thus reduce the burden on the U.S.

John Glaser is a Washington, DC based writer and a graduate student in International Security at the Schar School of Policy and Government at George Mason University. He has been published in CNN, Time, Newsweek, and The Guardian, among other outlets.