Does Australia (or Asia) Need to Choose Between America and China? 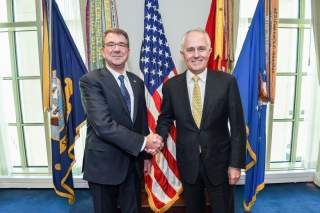 As the rivalry between China and the U.S. sharpens, Asian nations might have increasing difficulty balancing between the two international behemoths. Indeed, an American Army colonel told the Australian people that they must choose who they are with.

Australia long has been in a seemingly anomalous position, as a major trading partner of the People’s Republic of China (PRC) but a close military ally of Washington. The Aussies are aware of their conundrum, profiting from booming resource exports to the PRC while hosting U.S. troops directed at containing China—and developing their own defense plans directed in part at Beijing.

Col. Tom Hanson does not believe that Canberra has successfully walked the narrow line. In a recent radio interview he argued that Australians would have to choose between economic ties with China and military links to America: “there’s going to have to be a decision as to which one is more of a vital national interest for Australia.”

The Pentagon later termed his views “personal,” and he likely won’t be giving any foreign interviews for some time. Nevertheless, Australian Foreign Minister Julie Bishop responded to Hanson: “we are balancing relationships between our largest strategic ally and our largest trading partner with deft diplomacy, consistency and pragmatism.”

Which is precisely what one would expect of China’s neighbors. The PRC matters to all of them, in time likely more than will the U.S. Japan’s relations with Beijing remain ravaged by history and challenged by an ongoing territorial dispute, yet Tokyo wants to preserve a civil if not particularly friendly relationship. The Republic of Korea developed warm relations with China—warmer, it appears, than the latter’s ties to North Korea—but Chinese acquiescence to Pyongyang’s continuing obduracy and the South’s resulting participation in the THAAD missile defense system have cooled Seoul’s and Beijing’s mutual ardor.

Both Vietnam and the Philippines are squabbling with China over useless rocks and are looking more toward the U.S. for their security, but they will not break relations with the PRC. Even Manila, so heavily dependent on Washington, says it wants to negotiate over the hotly contested Scarborough Reef.

The rest of Southeast Asia is firmly within the PRC’s economic orbit. However, none wants to be a satellite: Indonesia recently found itself involved in a bitter fishing dispute with Beijing, while the Burmese military’s opening to the West at least in part reflected a desire to loosen China’s suffocating embrace. Thailand has edged toward China militarily in response to U.S. criticism of the 2014 coup, but the junta appears more interested in improving its bargaining power than switching sides.

Although Washington might prefer subservience to ambivalence, balancing is inevitable for East Asian nations. The PRC isn’t going away, so for them outright hostility would be foolish, even dangerous, whatever America’s preference. Vietnam (and India, which just inked a defense accord with the U.S.) isn’t likely to forget its decades-old shooting war with China, but also doesn’t want a repeat. Even U.S. allies which feel certain of Washington’s support would have nothing to gain from conflict other than a temporary defensive success.

Economic links provide an important uplift throughout the region. Few of Beijing’s neighbors would want to face their publics having downgraded or, worse, severed economic ties with China. Investment and trade with the PRC are more important than foreign aid as a boost for poorer economies in the region.

The better performers also greatly benefit from commerce with China. Despite poor political relations, Beijing and Japan enjoy a mutually profitable relationship. South Korea, defended by America for the past 66 years, now trades more with the PRC than with the U.S. and Japan combined. Discouraging economic relations wouldn’t be appreciated DownUnder either, where the government only avoided defeat by the narrowest margin in the recent election.

In fact, it’s not clear what choosing America over China would mean. Presumably not to sever diplomatic or economic ties with Beijing. Also not to obey every dictate from Washington. Perhaps to unreservedly back the U.S. in any serious or important dispute with the PRC, whatever that might mean. Certainly to support confrontational American naval tactics in nearby waters.

But for the U.S. to make such a demand invites rejection. First, Canberra (and anyone else) likely would see no reason to make such a choice. While war between the U.S. and China would require choosing sides, why should Australian policymakers abandon discretion in other cases?

Second, what would Washington do if the Aussies said no? Even friends don’t like to be treated as of no account. And if Canberra said no, with or without an uplifted middle finger, the U.S. could do little. Drop the alliance? Withdraw the Marines from Darwin? Release an angry tweet?

To suggest that nations ultimately have to decide between America and China is more than a little dangerous. “The Australians need to make a choice,” intoned Hanson. What if they peer long into the future and perceive a world in which China has the world’s largest economy and military and is without peer in the Asia-Pacific, while America, still wealthy and influential, has abandoned its unsustainable policy of promiscuous intervention? These assumptions are plausible, perhaps even likely, and they lead to a conclusion that few Americans would desire or even imagine.

Instead of demanding that friendly nations be for the U.S. or against, Washington should develop an approach that fits the ever more complicated environment of East Asia. Projecting power is expensive and as the federal government’s finances collapse amid retiring baby boomers there will be little public support for spending tens of billions of dollars annually to protect prosperous allies.

The preference of Washington elites for dominating China along the latter’s borders is insufficient to create a vital interest, in contrast to protecting U.S. territory, citizens, and liberties, which Beijing does not threaten. Most important, America’s friends aren’t likely to consider war with the PRC unless they believe Washington will do the heavy lifting—yet the U.S. has no reason to risk war with a nuclear power over its allies’ interests.

Maintaining peace in the Asia-Pacific, and especially between China and America, may be the most important foreign policy objective in coming years. It will not be advanced by pushing nations to choose sides.

Working through today’s many disputes and potential conflicts will be an extraordinary challenge. Basing policy on needless confrontation would be the worst approach possible.