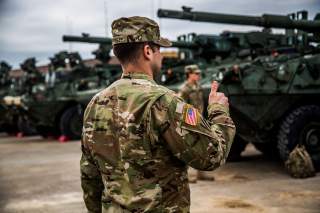 • Expansion for expansion’s sake is no argument. President Barack Obama called for Senate ratification to “demonstrate to other countries in the Balkans and beyond that NATO’s door remains open.” NATO’s supreme military commander, Gen. Curtis Scaparrotti, declared: “If we were to lose this, it would set back many of the other countries, and people, particularly in Eastern Europe that are looking forward to, and have their eyes set on the West.”

However, other prospective members, such as Bosnia, Kosovo, Macedonia/FYROM and Serbia, are equally useless from a security standpoint. And the first three raise even greater political problems than the Grand Fenwick lookalike.

Even worse would be to induct Georgia and Ukraine. Both would be security black holes—almost all risk and no gain. Although they are more substantial nations than Montenegro, Tbilisi’s military remains small, and its involvement in America’s misguided wars in Afghanistan and Iraq do not justify a security guarantee against Russia. Ukraine has a larger military, but an even bigger problem: an ongoing conflict with a nuclear-armed power.

Neither has ever had the slightest security relevance to America. However, they both were part of Imperial Russia and the Soviet Union; incorporating them into the long-standing anti-Moscow alliance directly strikes at Russia’s interest in border security.

• Contrary to claims of those lobbying for Podgorica, there are no symbolic gains for America. For instance, the Heritage Foundation headlined a recent paper “Support for Montenegro’s Accession to NATO Would Send a Message of Strength.” Similarly, in the last administration Deputy Assistant Secretary of Defense Michael R. Carpenter testified to Congress that “Montenegro’s NATO membership will be a powerful rebuke to Russia’s malign influence in the Western Balkans.”

It’s hard to take such arguments seriously. Instead, adding Montenegro to NATO would prove that just as patriotism is the last refuge of the scoundrel, symbolism is the last resort when no other argument justifies sacrificing American interests to benefit other nations. Vladimir Putin and his generals aren’t likely to go all wobbly at the prospect of Podgorica’s vast legions lining up against them. For no gain, reinforcing the paranoia of the aggressive nation supposedly threatening the European peace is foolish. Elevating today's Duchy of Grand Fenwick to NATO status won’t help keep the peace.

Gen. Scaparrotti must have been preparing a comic monologue when he termed Montenegrin membership “absolutely crucial.” NATO still purports to be a military alliance. Indeed, what makes NATO unique is its role as a system of collective defense. Adding new members should increase U.S. security. There are plenty of other forums to achieve other ends.

In The Mouse That Roared, the Duchy of Grand Fenwick enjoyed its grand adventure. Montenegro would like to do the same. But Washington's decision should be based on America’s security. The Defense Department should no longer be a source of international defense welfare for other nations.

Image: A U.S. soldier with armored vehicles preparing for deployment to Poland. Flickr/NATO