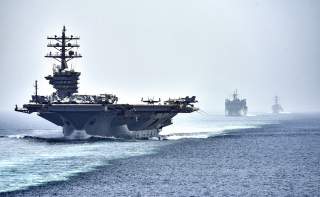 America’s experience in the Middle East over the past fifteen years has been bruising, to say the least. For his part, President-elect Donald Trump has repeatedly, if inconsistently, exploited Americans’ frustration with what are widely viewed as foreign policy failures in Afghanistan, Iraq, Libya and Syria. At a rally last month, Trump promised to “stop racing to topple foreign regimes that we know nothing about,” adding that “this destructive cycle of intervention and chaos must finally come to an end.” On the other hand, Trump has also used brazenly hawkish rhetoric and has filled his cabinet with people not at all averse to bold U.S. interventionism.

Trump’s inconsistencies aside, it seems voters welcomed his blunt criticisms of U.S. military action in the Middle East. But scrutiny of U.S. foreign policy in the region should go beyond a potent skepticism of regime change or exasperation with chasing after terrorists. In addition to our ill-fated nation-building effort in Afghanistan and the fight against ISIS, the traditional rationale boils down to oil. As it turns out, though, forward deployment isn’t all that useful in securing the free flow of oil.

Overall the United States has approximately 35 thousand troops in the Middle East. Those that are based in Kuwait (about 13 thousand) and in Bahrain (about five thousand) are most explicitly about energy security, although various U.S. bases across the region cooperate in that role. This  forward deployed military presence is supposed to achieve four basic energy security objectives: (1) protect against the rise of a regional hegemon that could gain control of energy resources; (2) deter any external power from gaining a foothold in the region; (3) dampen regional rivalries and stave off a war that could disrupt supply; and finally, (4) deter or rapidly reverse any attempt to close the Strait of Hormuz, a critical chokepoint through which 30 percent of the world’s seaborne oil passes.

But do permanent peacetime military forces really serve these objectives? According to Charles L. Glaser and Rosemary A. Kelanic, “the conventional wisdom, which holds that U.S. oil interests in the Persian Gulf are so large and threatened that the United States must dedicate large military capabilities to their defense” is wrong. Danielle F. S. Cohen and Jonathan Kirshner go so far as to call the belief in “energy insecurity”—common among policymakers and some academics—“a myth,” and “an erroneous belief that national security requires ambitious and vigilant foreign policy measures to assure adequate access to energy.”

Indeed, the United States today is far less reliant on foreign oil supplies than it once was. In 2015, only about 24 percent of the petroleum consumed by the United States was imported from foreign countries (the lowest level since 1970), and only about 16 percent of that was imported from the Middle East. This is largely because U.S. domestic production has significantly increased thanks to technological advances in exploiting shale reserve areas. Since 2008, annual U.S. crude production has grown by about 75 percent and net import volumes are projected to decline by 55 percent by 2020. Canadian oil output is also expected to double by 2040, meaning North America is on track to be a net oil exporter by 2020 and to remain so through 2040.

More importantly, oil is a fungible commodity traded on global markets and subject to the laws of supply and demand. Supply disruptions from one source impact the overall price, but can quickly be offset by an increase in output from another source. In every oil shock since 1973, global energy markets adapted quickly, by increasing production from other sources, rerouting existing supplies and putting both private and government-held stockpiles around the world into use.  These market adjustments mitigated the ramifications of the shocks and stabilized prices and supply. U.S. military presence in the Persian Gulf did not prevent the disruptions, nor did it ease the resulting economic pain.

In addition, the balance of power globally and in the region today is favorable for energy security. First, an external power gaining a stranglehold over the Persian Gulf region is implausible. The Soviet Union is long gone and today’s Russia suffers from systemic economic problems that hinder its potential to project power in the Middle East. China, while increasingly powerful in its own sphere, lacks the political will to dominate the Gulf.

The regional balance of power is also favorable. According to Joshua Rovner, “the chance that a regional hegemon will emerge in the Persian Gulf during the next twenty years is slim to none. This is true even if the United States withdraws completely.” No state in the region possesses the capabilities necessary to conquer neighboring territories or gain a controlling influence over oil resources, and most are bogged down and distracted by internal problems. Overall the region is in a state of defense dominance: while too weak to project power beyond their borders, the major states do have the capability to deter their neighbors, making the costs of offensive action prohibitively high.

So, three of the major scenarios that have traditionally justified a forward deployed military presence in the Persian Gulf—the entrance of a hostile external power, the rise of a regional hegemon and a military clash among the major states—are exceedingly unlikely even absent the U.S. military presence.

Probably not. The extent to which an active U.S. military presence actually secures the free flow of oil is very likely overstated. The U.S. Navy’s Fifth Fleet in Bahrain and daily patrolling of the Persian Gulf supposedly serves as the principal deterrent stopping a state like Iran from attempting to close the Strait of Hormuz. But Iran would run unacceptably high risks in attempting to do so even absent the U.S. naval presence. To begin with, closing the strait would be severely damaging to Iran’s own interests, as it represents a critical source of national income, especially now that many sanctions have been lifted in the aftermath of the nuclear deal. Only if Iran found itself in the midst of some regional conflagration in which the survival of the regime was at risk would Tehran do something so reckless. Moreover, any sustained attempt to close the strait would likely mobilize an overwhelming international military coalition against Iran, like the one that was generated in response to Iraq’s 1990 invasion of Kuwait, a prospect that would itself threaten the survival of the regime.

And there are practical obstacles to closing the strait. The waterway is wide and deep enough to make full closure exceptionally difficult, given Iran’s capabilities. Fully mining the strait (to the extent necessary to actually disrupt traffic) without early detection would be hard, but even if successful, “mines would only harass shipping rather than close the waterway,” and even then only partially and temporarily. This happened during the Tanker War in the 1980s, which slowed, but didn’t halt, shipping. An Iranian attempt to supplement mines with antiship missile attacks would not be terribly effective against resilient oil tankers, and “the heavy ship traffic through the strait would quickly consume Iran’s entire arsenal.” Finally, the U.S. military could ably respond to such an unlikely scenario with offshore, over-the-horizon forces.

The other nightmare contingency that could do serious damage to U.S. energy interests is some kind of collapse or radical overthrow of the Saudi regime. But this scenario is even less susceptible to remedy by a forward military presence. Indeed, the presence may itself create the tensions that could destabilize the monarchy. Any mission to stabilize a severe case of civil unrest in Saudi Arabia would require a massive military occupation on the order of Iraq 2003-2011. But Iraq showed that counter-insurgency campaigns are costly and often ineffectual in serving long-term U.S. goals. Military intervention would be so risky and fraught with potential negative consequences that the pain of a price spike or temporary shortage is likely to be easier to endure than the costs and risks associated with military action. In any case, the likelihood of an internal collapse of the Saudi regime or of its ability to export oil is, according to Thomas W. Lippman, “so unlikely that it can be disregarded from strategic planning.”

In general, the case for using bases and troops to protect the free flow of oil is weak. A large and permanent military force in the region is not particularly useful for oil security and has often been counterproductive. Even if the United States was forward deployed prior to Iraq’s 1990 invasion of Kuwait, it’s not clear it would have deterred Saddam Hussein. Nor would a hegemonic presence have done much to prevent the OPEC oil embargo of 1973.

The United States should gradually withdraw its forward deployed military forces from the Persian Gulf region. America’s carrier-based airpower and long-range bombers, along with prepositioned equipment in Europe or Diego Garcia, should be sufficient to enable rapid deployment in unlikely contingencies. We should work with allied Gulf states to further develop pipelines that can bypass the Strait of Hormuz in the event of a crisis and also to reassure markets of sufficient backup supply routes should any conflict erupt. Finally, the United States should negotiate with Russia, China and India to develop mutually beneficial norms of behavior to ensure that no external power tries to control the region’s energy resources for its exclusive advantage and also to encourage burden-sharing in a region whose resources are consumed increasingly by China and India, and decreasingly by the United States.