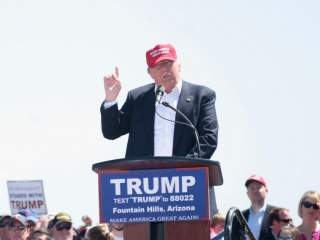 The 2016 Republican primary elections in the United States has not only defied all expectations, but has also made mince-meat out of the business of making political predictions. The political pundits that Americans so often recognize on television, whether Democratic or Republican, liberal or conservative, have either been exposed as fools toting the conventional line or partisans hoping that a bombastic self-marketer will crater and lose his chances at winning the Republican nomination.

To date, those hopes have been dashed repeatedly. Of the states that have thus far held Republican primaries or caucus, Donald Trump has won eighteen of them and close to nearly forty-eight percent of the delegates. His accomplishments to date would be impressive for an ordinary politician. But for someone like Trump who has said so many controversial things on the campaign trail, his political strategy has turned the entire political world on its head. His foreign policy strategy also appears to be novel for the modern GOP, as he made plain in a meeting with the Washington Post editorial board on Monday.

Trump questioned America’s role in both Europe and Asia. “We certainly can’t afford to do this anymore,” Trump said about NATO. “NATO is costing us a fortune, and, yes, we’re protecting Europe with NATO, but we’re spending a lot of money.” When it came to Asia, he said that America is not profiting from its military posture: “I think we were a very powerful, very wealthy country, and we are a poor country now. We’re a debtor nation.”

On Iran, Trump is even more circumspect. Tehran’s financial and military support to the Assad regime; its continued arming and funding of Hezbollah, Hamas and Islamic Jihad; and the Iranian Government’s penchant for human rights abuses is rarely if ever discussed. In the past, Trump has indicated that he would police the Iranian nuclear agreement with a heavy hand. But in almost the same breath, he reminds Americans that he views the deal as “one of the dumbest deals ever,” citing inaccurate figures as to how much money Tehran will receive in exchange for opening up its nuclear facilities to international inspectors.

America’s traditional allies in the region, Saudi Arabia, Kuwait and Qatar, are not out of the woods either. Throughout the campaign, Trump has blasted the Saudis as akin to a child who needs his parent (the U.S.) to survive. “Saudi Arabia,” Trump wrote on Twitter, “should be paying the United States many billions of dollars for our defense of them. Without us, gone.” The Gulf States, in Trump’s mind, should also pay for a safe zone inside Syria where civilians can find relief from the Assad regime and ISIL. Again, specifics are left out of the equation; why Riyadh, Doha, and Abu Dhabi would agree to fund a project to the tune of tens of billions of dollars over a long period of time without something in return is unanswered.

For anyone who wants a commander-in-chief fully briefed on world affairs, a Trump presidency would be a new development. The neocons had a lot of interest and experience in foreign policy and messed up badly. Now the GOP has a candidate who takes a very different stance from the party’s traditional positions but has little demonstrable experience. For America’s friends and allies in the Middle East, it would be a voyage into the unknown.

Daniel R. DePetris is an analyst at Wikistrat, Inc., a geostrategic consulting firm and a freelance researcher. He has also written for CNN.com, Small Wars Journaland the Diplomat.