Is Donald Trump Good for the Cause of Foreign-Policy Restraint? 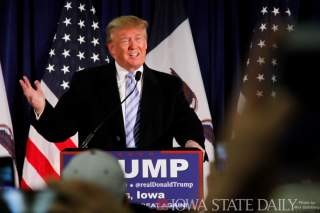 For instance, NATO advocates were reduced to talking about having the anti-Soviet military compact promote student exchanges and battle drug smuggling. But advocates of preserving every commitment, alliance and deployment quickly recovered their confidence, insisting that the status quo now was more important than ever.

Since then NATO has expanded, Washington has “rebalanced” toward Asia. The United States has fought a succession of wars. Despite public disquiet over multiple foreign disasters, the political elite remains remarkably united in backing America’s expanding international military role.

Leading Republicans simply refused to acknowledge George W. Bush’s mistakes, instead shamelessly blaming Barack Obama for the Iraq debacle and all that followed. Democrats who opposed Bush’s Iraq invasion said little as the current president escalated old wars and initiated new conflicts and drone campaigns. GOP presidential candidates competed over how much murder and mayhem they would wreak. The Democratic frontrunner pushed for U.S. military intervention in the Balkans as First Lady, voted for the Iraq war as Senator, and orchestrated the Libya campaign as Secretary of State.

Breaking with this prowar consensus is Donald Trump. No one knows what he would do as president, and his foreign-policy pronouncements fall far short of a logical and consistent foreign policy program. Nevertheless, his perpetual bombast and bluster could not disguise the fact that he was the most pacific GOP contender, perhaps save Sen. Rand Paul.

Trump criticized the Iraq and Libya interventions, opposed confrontation with Russia, and, even more strikingly, denounced “war and aggression” in his recent foreign-policy address. He also criticized multiple alliances which seem only to serve as conduits for U.S. aid to populous and prosperous states.

Unsurprisingly, Trump’s views have dismayed the guardians of conventional wisdom. Democrats could be counted on to be critical, despite his sharp attacks on Bush. The usual GOP suspects were even more hostile, in part because of his attacks on Bush. More than one hundred Republican foreign policy practitioners wrote an open letter denouncing him. Some of them are hoping for an independent candidate or planning to vote for Clinton.

More significantly, however, for the first time in years, if not ever, many advocates of American dominance believe it necessary to defend their views, which they had previously considered to be self-evident. For instance, NATO supporters are trying to explain why the U.S. must defend European states which, collectively, are wealthier and more populous than America.

Friends of Saudi Arabia are attempting to justify backing a nation which maintains political and religious totalitarianism at home and promotes hostile Islamic fundamentalism abroad. Promoters of the Asian pivot are searching for arguments to explain why Washington pays to protect South Korea and Japan, which skimp on their own defense. Despite the irritated harrumphing which uniformly accompanies their arguments, all have felt the need to respond.

Nevertheless, the downsides of Trump as messenger are obvious. While his opinions on allied free-riding are well-established, on other issues he has shifted back and forth. Who knows if he means what he says about much of anything?

Moreover, even when he is right conceptually, he often misses the mark practically. For instance, the answer to allied free- (or cheap-) riding is not to charge other countries for America’s efforts. Washington should not hire out the U.S. military. How much is the blood of American military personnel worth? The answer is to simply turn the defense of other nations over to them. Serious countries should defend themselves, and not expect military welfare from the globe’s superpower.

Trump also mixes sensible foreign-policy opinions with misguided and overwrought attacks on trade, immigration and Muslims. Even if he strengthened the U.S. by scaling back Washington’s imperial pretensions, he would weaken America in other ways. And his manner is more likely to repel than attract. Insulting people’s parentage while telling them that they are idiots rarely is a good strategy for converting opponents.

Thus, a debate has arisen among critics of current foreign policy: Is Trump helpful or harmful in promoting an alternative to promiscuous military intervention and constant war-making? Whatever happens in November, will he advance the cause of implementing a more rational and realistic foreign policy?

No doubt, proponents of realism, noninterventionism, and other forms of restraint would prefer to have a different representative. But they have to fight the policy wars with the politicians America has, not the ones it needs.

Rep. Ron Paul challenged the GOP’s prowar orthodoxy for years, but never could break out of his niche and threaten to grab the nomination. Sen. Rand Paul was more nuanced in his views this election cycle, unfortunately attracting far less public attention and winning far less electoral success. Beyond them there has been no other responsible Republican presidential contender going back to 2004. Even the seeming rational John Kasich went rogue, advocating a fifteen-carrier navy and proposing to shoot down Russian planes in Syria. Everyone else might as well have performed the Maori Haka before talking about foreign policy, when they inevitably threatened to bomb, invade and occupy much of the known world.

At least there now is an advocate of sorts for restraint, and one headed for a major party nomination. It is hard to see how supporters of a more reasonable international approach could end up worse off. Imagine Trump living down to expectations and losing badly. Then the usual war-happy crew would insist that his foreign-policy approach has been discredited and seek to squelch any further debate. Yet it might not be so easy for them to eradicate from the public arena proposals for a more sensible foreign policy. And even if so, everything would simply go back to normal: proponents of restraint would be limited to writing occasionally for the National Interest and elsewhere, while their views were excluded from any government office that mattered. Just like today.

If Trump does respectably but loses narrowly, he will have demonstrated popular discontent with a policy in which average folks pay and die for utopian foreign-policy fantasies advanced by Washington policy elites. That would encourage future political leaders to seek votes by challenging today’s interventionist consensus. And likely would spark an ongoing debate over the future of U.S. foreign policy. Those whose policies have consistently failed might still dominate the commanding heights of the think tank and publishing worlds, but they would face meaningful competition.

Finally, if Trump triumphs he will be in a position to transform U.S. foreign policy. What he would actually do is anyone’s guess. But he would not likely accept the status quo. In which case for the first time in decades there would be a serious debate over foreign policy and a meaningful opportunity to change current policies.

Given his avowed hostility to the existing elite which he blames for today’s manifold problems, Trump likely would open positions to people breaking with conventional wisdom. No doubt, the result would fall short of a noninterventionist nirvana. But at least some advocates of restraint might grace some corridors of power in Washington. Almost anything would be an improvement over the situation today.

There are lots of reasons to oppose Donald Trump’s candidacy. However, he offers restraint advocates their best opportunity in a generation to challenge today’s interventionist zeitgeist. The end of global communism did little to change U.S. foreign policy. It might take the election of Donald Trump to make a real difference.