Donald Trump Prepares to Escalate Confrontation with Russia over Ukraine 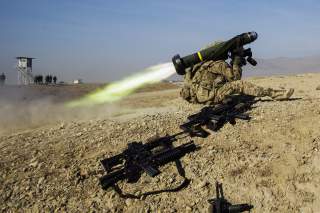 Most Americans were told Donald Trump won the presidential election last year. But his policy toward Russia looks suspiciously like what a President Hillary Clinton would have pursued. Exhibit A is the apparent decision to arm Ukraine against Russia in the proxy conflict in the Donbass. This dunderheaded move will simply encourage Moscow to retaliate not only in Ukraine but against U.S. interests elsewhere around the globe.

With over 10,000 dead, the conflict in Ukraine is a humanitarian travesty but of minimal security consequence to America and Europe. Indeed, Kiev’s status never was key to Europe’s status. An integral part of the Soviet Union and before that the Russian Empire, Ukraine turned into an unexpected bonus for the allies by seceding from the Soviet Union, greatly diminishing the latter’s population and territory. Russia’s seizure of Crimea and battle in the Donbass destabilized an already semi-failed state, but did not materially alter the European balance of power. Or demonstrate anything other than Moscow’s brutal yet limited ambitions.

In fact, present allied policy makes continuation of the current conflict almost inevitable. Newly released documents demonstrate that Soviet officials reasonably believed that releasing their Warsaw Pact captives would not lead to NATO’s expansion to Russia’s border. Well, well. Look what actually happened—the very dramatic increase in tensions that George F. Kennan predicted would occur. For Russia sees geographical space and buffer states as critical for its security, and none are more important than Ukraine.

Expanding NATO, disregarding Moscow’s historic interests in the Balkans, dismantling onetime Slavic ally Serbia, aiding “color revolutions” that brought anti-Russian governments to power along its border, announcing the intention of inducting both Georgia and Ukraine into the alliance created to confront Moscow, and finally ostentatiously backing a street revolution against a corrupt but elected leader friendly to Russia—going to far as to discuss who should rule after his planned ouster—could not help but be viewed as hostile in Moscow. One can easily imagine how Washington would react to similar events in Canada or Mexico.

Russia’s response was unjustified but efficient and, most important, limited. Moscow grabbed Crimea, the only part of Ukraine with a majority of Russian-speakers (who probably favored joining Russia, though the subsequent referendum occurred in what was occupied Crimea). Moscow further backed separatists in Eastern Ukraine, perhaps in hopes of grabbing territory or merely bleeding Kiev.

Some Western responses were near hysteria, imagining a blitzkrieg attack on Ukraine, conquering the country. The Baltic States saw themselves as the next targets. Poland remembered its twentieth century conflicts with Moscow. At least one observer added Finland to Moscow’s potential target list. Others worried about intimidation of allied states, borders being withdrawn, and challenges to the European order. Some afflicted with war fever feared an attempt to reconstitute the Soviet Union and perhaps roll west from there.

None of which happened.

Perhaps President Vladimir Putin secretly was an Adolf Hitler-wannabe but was dissuaded by the U.S. and NATO response. However, economic sanctions and military deployments were modest. Assistance to Ukraine did not include lethal military aid. Most likely, Putin never intended to start World War III.

Instead, he opportunistically took advantage of the opportunity to snatch Crimea, the territory with the closest identification with Moscow, simultaneously safeguarding the latter’s major Black Sea base, and create a frozen conflict in the Donbass, effectively preventing Ukraine’s entry into NATO. Russia’s activity there also gives him an opportunity to create additional trouble for the U.S.

Moscow’s policy is unpleasant for America and Europe, but only prevents the allies from doing that which is not in their interest: inducting a security black hole into NATO. Even before 2014, Ukraine was a political and economic mess. While independent it mattered little for Western security, in NATO it would bring along all of its disputes and potential conflicts with Russia, a touchy, nationalistic nuclear power.

What State Department called “enhanced defensive capabilities,” which require congressional approval, aren’t likely to raise the price of the conflict enough to force Russia to back down. The Putin regime has far more at stake in preserving its gains than the U.S. does in reversing them. Moscow also is better able to escalate and is likely to consistently outbid the West: Putin’s advantages include greater interests, geographic closeness, and popular support. For Ukraine more weapons would at most mean more fighting, with little additional advantage.

Indeed, the plan to arm Kiev with weapons, especially if anti-tank missiles are included, as news reports indicate, would risk turning the Donbass conflict from cool to warm--and perhaps more. Ukraine already joins Russia in failing to implement the Minsk Agreement. Kiev would not only be better armed, but might believe that it enjoyed an implicit guarantee from Washington, which in turn would have more at stake and thus be less inclined to abandon its new “investment.” Then what if Moscow escalated? In 2014 the Putin government deployed Russian military units to counter Ukrainian gains. Would Washington do likewise in response to Moscow?

At the same time, transferring lethal arms would divide the U.S. from European nations, many of which oppose further confrontation with Russia, especially over Ukraine. Brussels already bridled at Congress’ new sanctions legislation, which passed without consulting the Europeans and targeted European firms. If Moscow responds with escalation, Washington may find no one behind it.

Providing lethal weapons would almost certainly encourage the Ukrainians to press for even heavier arms and escalate the fighting, as well as discourage them from negotiating a settlement. U.S. officials refer to the weapons as defensive, but their capabilities are not so easily compartmentalized. Said Gen. Joseph Dunford, chairman of the Joint Chiefs of Staff said the “ability to stop armored vehicles would be essential for them to protect themselves.” True, but the ability to disable tanks is useful on offense as well as defense. There has been little movement in the battle line over the last couple of years. New U.S. weapons aren’t necessary to preserve the status quo. Rather, they would most help Ukraine press harder for a military solution.

Does Kiev want to accept a compromise peace or fight on? Obama Pentagon official Michael Carpenter said providing weapons “will be a huge boost of support to Ukraine.” Moscow is not concerned about Kiev’s military potential. Russia is concerned that the U.S. and Europe say they intend to induct Ukraine into NATO. The closer the military ties grow between America and Ukraine, the greater Moscow’s incentive to keep the conflict going.

Russia also has opportunities to retaliate against American interests elsewhere. Deputy Foreign Minister Sergey Ryabkov said: “The United States crossed the line in a sense” and “may lead to new victims in a country that is neighboring us.” America, he added, was an “accomplice in fueling war.”

That might be just talk, but Russia can provide aid, sell arms, offer political backing, and give economic assistance in ways that hamper U.S. activities. Afghanistan, Cuba, Egypt, Iran, North Korea, Syria, and Venezuela all provide opportunities for Russian mischief. Moscow could refuse to back additional sanctions on Pyongyang or even provide the latter with S-400 anti-aircraft missiles.

Although limited resources constrain Moscow, politics encourages a tough response. Putin is running for reelection but has lost support because of the Russian Federation’s economic weakness. Nationalism remains one of his strongest issues; an assault by America on Russian interests would offer him a means to rally public support.

Also noteworthy is the fragility of the Ukrainian state. Kiev’s self-inflicted wounds are a more important cause than Russian pressure. The government is hobbled by divisions between East and West, violent neo-fascist forces, bitter political factionalism, economic failure, and pervasive corruption. The recent specter of former Georgian President and Ukrainian Governor Mikheil Saakashvili clambering across rooftops, escaping arrest, and railing against President Petro Poroshenko epitomized Ukraine’s problems. Kiev, to put it mildly, is not a reliable military partner against its nuclear-armed neighbor.

A better approach would be to negotiate for Russian de-escalation by offering to take NATO membership for Ukraine (and Georgia) off the table. In fact, expanding the alliance is not in America’s interest: the U.S., not, say, Luxembourg, is the country expected to back up NATO’s defense promises. And neither Kiev nor Tbilisi warrants the risk of war with a great power, especially one armed with nukes. Eliminating that possibility would reduce Moscow’s incentive to maintain a frozen conflict in the Donbass. Backing away also would create the possibility of reversing military build-ups by both sides elsewhere, especially around Poland and the Baltic States.

Washington and Moscow have no core security interests in conflict with each other, especially in Ukraine. Instead of turning a peripheral security issue into a potential military clash with Moscow, Washington should seek to trade military disengagement from Ukraine for Russian acceptance of that nation’s territorial integrity. Moscow might not agree, but the Trump administration won’t know unless it makes the offer. Right now, it doesn’t seem to care to even try. Quite the contrary.