Donald Trump Should Embrace the Economic Benefits of Peace 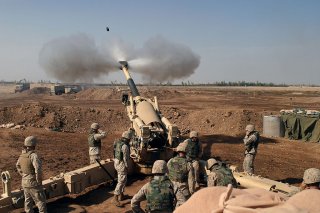 President-elect Donald Trump appears focused on domestic policy. He wants to rebuild infrastructure, cut taxes, reduce imports, save jobs, streamline regulation and more. While he seems to have strong views on international issues, he seems to lack “nuance.” He won’t be able to escape foreign controversies, but he could avoid creating his own.

He should follow one overriding principle: stay out of war.

George W. Bush thought differently. Unfortunately, his two conflicts are the gifts that keep on giving—disastrously. The Afghanistan war was necessary, but only its initial phase, targeting Al Qaeda and ousting the Taliban. The following fourteen-plus years of quixotic nation building were a tragic diversion. The invasion of Iraq, with no connection to 9/11 and posing no threat to America, was foolish from the start.

In these two conflicts, Brown University’s Watson Institute for International and Public Affairs estimates, almost 6,900 American military personnel have died and another fifty-two thousand have been wounded. Even more U.S. contractors, nearly 7,100, have been killed. Tens of thousands more have been injured. Thousands of allied military personnel and foreign contractors also have become casualties.

These numbers understate the human cost. Many of those wounded suffered, and still suffer, grievously. They would have died in earlier wars and will endure crippling injuries for the rest of their lives. Wrote Neta Crawford of Boston University, “The veterans of these wars suffer from skeletal injury, PTSD and Traumatic Brain Injury at rates higher than the veterans of other wars.”

Moreover, hundreds of thousands of civilians have died in the sectarian conflict unleashed by the U.S. invasion in Iraq: estimates start around two hundred thousand and race upward. More than thirty thousand have died in the Afghan war. American drone strikes in Pakistan have killed more than 1,400 civilians. Thousands more civilians have died in Pakistani military operations supported by America. An estimated 7.6 million Iraqis, Afghans and Pakistanis have been displaced at home or turned into refugees overseas.

Imagine what America would be if Bush had not plunged the nation into two disastrous and unnecessary wars. Imagine if the tens of thousands of Americans had not been killed or injured. Imagine if they were alive and well to serve their families, communities and country. Imagine what they could have accomplished for themselves and contributed to the lives of those around them. The nation would be much richer in human, social and economic terms. While these lives obviously cannot be reclaimed, the president-elect could honor their sacrifice by avoiding any similarly misguided wars in the future.

There’s also the financial cost of Bush’s follies. As of September, figured Crawford in a Watson Institute paper, Washington had spent $4.79 trillion on Afghanistan and Iraq, along with still sizeable but much smaller amounts in Pakistan and Syria. Of course, explained Crawford, “a full accounting of any war’s burdens cannot be placed in columns on a ledger.” Yet by even this limited measure Americans should recoil in horror at the extraordinary waste.

These prodigious expenditures span the spectrum. Much went for combat operations. A substantial amount funded civilian aid and reconstruction, much of it grossly wasted. Some expenditures covered antiterrorism activities at home. Washington paid allies, such as Croatia, Georgia, Jordan and Poland, for their support. Pakistan, too, received much civilian and military assistance, including $22 billion in Coalition Support Funds. Highly indebted Uncle Sam paid interest on the Pentagon’s appropriations.

In addition, wrote Crawford, “any reasonable estimate of the costs of the wars includes the fact that each war entails essentially signing rather large promissory notes to fulfill the US obligations for medical care and support for wounded veterans. These future obligations will total approximately an additional $1 trillion in medical and disability payments and additional administrative burden through 2053.” For instance, an astounding 327,000 veterans of the post-9/11 wars have been diagnosed with brain injuries, and more than seven hundred thousand have been classified as at least 30 percent disabled.

Promiscuous war making also requires a larger military. Thus, greater annual expenditures are required to support a bigger force structure and more weapons. Pay was increased to attract volunteers as unpopular wars reduced the propensity of many young men and women to enlist. Crawford also noted that expenses rose because of “the more complicated medical needs of active duty soldiers injured during their deployments.” Benefits must be provided to additional retirees. Overall, Bush’s misguided wars prompted a large increase in military outlays for this “base budget,” which Barack Obama only began trimming late in his first term, before pushing back up after he plunged America into war against Islamic State. Crawford attributed $733 billion in base budget expenses to Bush’s wars.

Still, Crawford’s $4.79 trillion cost estimate remains too low. It does not include the expense of veterans’ care paid by states and localities. Nor “other costs externalized to military families and Americans more generally,” including “the macro-economic consequences of the wars.”

Nor is future interest expense included. Neither Bush nor Obama used traditional measures to finance their wars—such as higher taxes, sale of war bonds, equivalent spending cuts, or conscription. Thus, the conflicts, wrote Crawford, “are projected to add more than $1 trillion dollars to the national debt by 2023. By 2053, interest costs will be at least $7.9 trillion unless the US changes the way it pays for the wars.” That is, Americans may eventually pay more to finance the wars’ costs than for the wars themselves.

Who predicted anything close to this expense? No one, at least not in the Bush administration. Mitch Daniels, head of the Office of Management and Budget, figured $50 to $60 billion total. Economic adviser Lawrence Lindsey was forced out after predicting a war cost of $100 billion to $200 billion. The president he served viewed this estimate as wildly excessive.

In short, the Bush administration lived in a fantasy world as it committed the worst foreign-policy blunder in decades. Trillions of dollars were diverted from other, beneficial uses. And we will continue paying for Bush’s wars for years, if not decades, more.

Donald Trump must take a different course if he wants to solve problems, make deals and strengthen America. He should start by insisting on no more stupid wars. No social engineering, no nation building, no humanitarian crusades, no shaping the international environment. Absent a compelling justification, an extraordinarily serious if not vital interest, he should not loose the dogs of war.

Next, he should end Bush’s stupid wars. President Trump should bring the troops home from Afghanistan immediately. Fifteen years is enough. So long as the Taliban does not host terrorist training camps, Washington can live with a divided Afghanistan stuck in the Dark Ages. It is beyond America’s power to turn Central Asia into a mirror image of America.

And he should draw down U.S. forces in Iraq. The latter has the resources to defeat Islamic State. America can only lose participating in an ongoing sectarian war in which even its allies are adversaries: Shia-dominated Iraqi military, local Sunni tribes, Kurdish peshmerga, Sunni Turkey’s military and Iran-backed Shia militias. Unfortunately, after pushing the Iraqi Humpty Dumpty off of the wall, Washington cannot put him back together again.

It might be hard for Donald Trump to decide what to do. But it shouldn’t be hard for him to decide what not to do: start another war. He is far more likely to succeed if America is at peace. Making that happen would be could be his most important legacy.

Doug Bandow is a Senior Fellow at the Cato Institute. A former Special Assistant to President Ronald Reagan, he is the author of Foreign Follies: America’s New Global Empire (Xulon).