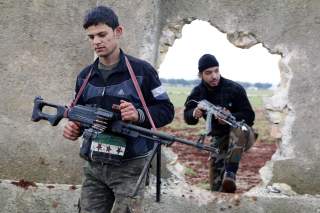 The scenes trickling out of Douma, one of the largest cities in the Damascus suburbs, are absolutely horrifying. Men, women, and children lying motionless on the ground, killed by an unknown toxic substance allegedly dropped by Syrian government aircraft in the middle of the night. Sleepless and exhausted medical workers who are already begging for resources running around, dousing people impacted by the chemical substance with water and putting oxygen masks on others suffering from exposure. Rescue workers from the White Helmets describe a confusing and chaotic situation; the Syrian American Medical Society has documented a death toll of forty-three. The Syrian Arab Red Crescent, roaming around town looking for survivors, was still finding bodies on the street the next morning.

Less than twelve hours after the first reports came in on social media platforms, official Washington was aghast that something like this could happen in the twenty-first century. Many lawmakers have been hesitant to comment about the chemical attack, but some senior members have made their views known that the Trump administration needs to do something about it. Sen. Bob Menendez, the ranking member of the Foreign Relations Committee, tweeted that “[t]he United States must not waver in our utter rejection of the use of chemical weapons anywhere in the world.” Sen. John McCain, the chairman of the Armed Services Committee, all but laid the chemical weapons attack at the feet of the White House, claiming that Trump’s call to withdraw U.S. troops from Syria prodded Bashar al-Assad into thinking he could use these weapons and get away with it.

What should President Trump to do in response? Speaking on CNN’S State of the Union on Sunday morning, Sen. Susan Collins recommended a punitive strike circa April 2017, when U.S. Navy ships in the Mediterranean launched several dozen Tomahawk cruise missiles at a Syrian military airfield in retaliation for a sarin gas strike in northern Syria. This is an option the Trump administration may very well take; the president’s homeland security adviser uttered the proverbial “no options are off the table” line, which at least suggests that the National Security Council may come to President Trump with a consensus recommendation about throwing a couple more tomahawk missiles at the problem.

President Trump spoke about this latest atrocity twice yesterday, and from the sound of it, Bashar al-Assad should anticipate damage to several of his military bases. “We have a lot of options, militarily,” the president told reporters with Vice President Mike Pence to his right and new national security adviser John Bolton to his left. “And we’ll be letting you know pretty soon. Probably after the fact.”

During tragedies like these, Washington tends to engage in moral soul-searching. This is particularly the case when Syria comes to mind, a war that much of the foreign-policy establishment inside and outside of government convinced themselves would be over a long ago were the United States to have gotten involved sooner.

Yet it is exactly when emotion dominates the discourse when hard-headed reason needs to prevail. Major foreign-policy decisions, especially when the decision could involve the use of U.S. military force, cannot be made solely on the basis of human emotion. After all, were the United States to respond to every awful thing that happened around the world every single moment of every single day, the U.S. military would no longer be the U.S. military—it would take the form of the world’s super cop, jumping into every situation in an attempt to right all the world's wrongs.

When all is said, done, and debated, President Trump could very well make the decision to strike a few more Syrian military facilities to show Bashar al-Assad, the Iranians, and the Russians who is boss. But one would certainly hope that the White House dives into the hard questions that the American people expect their leaders to ask.

First, if the objective of a U.S. military strike in retaliation for the chemical attack in Douma is to deter further chemical weapons use, would it succeed? This was precisely the idea behind the administration’s missile attack on the al-Shayrat airbase one year ago, one which was fervently applauded by lawmakers from both sides of the aisle. As Americans, the strike last April may have made us feel good for a couple of days, but the operation clearly failed in its deterrent impact. Dozens of chlorine attacks have occurred in the interim. Would a similar operation be any different? And if not, what is the point of taking military action other than to satisfy the urge to “do something?"

Second, what would the Russians do in response? Gen. Valery Gerasimov—the chief of Russia’s General Staff—is not a man who likes to draw attention to himself, so it would be very unwise for Washington to dismiss his threats of “retaliatory measures” in the event of U.S. military action against the Syrian government. Moscow has invested enormous resources into the Assad regime’s preservation; indeed, were it not for the Russian Air Force, Assad’s head would probably be on a pike. The Trump administration should not delude itself into thinking that Russian president Vladimir Putin would change tact after a hypothetical U.S. military operation—however small-scale and precise it may be. Are the dangers of a potential great power confrontation worth the benefits of a few days of positive news stories for the White House?

Third, does the Trump administration even have legal authority to launch a strike against the Syrian government? Many lawmakers would argue that the answer is yes—that as commander-in-chief, President Trump has the executive power to order U.S. troops and airmen into a combat situation when he assesses it is in the U.S. national security interest to do so. This, however, would be a skewed interpretation of the law and what the U.S. Constitution actually says about the matter. The president may be the commander-in-chief, but that doesn’t mean he exercises the powers of a king. Were America’s elected officials in the legislative branch do not approve of the military option, then it would be plainly illegal for any president to go ahead and authorize it. If President Trump is intent on pulling the trigger, he needs to dispatch his national security team to Capitol Hill in order to make his case.

Finally, it is America’s duty to respond to every suspected or confirmed case of chemical weapons use in any part of the world? If Trump chooses to use military force and destroyed a few dozen Syrian combat aircraft or a few Syrian army bases or checkpoints in response to the grisly events in Douma, then he will set a precedent and opens up the United States to similar action in the future. The world will expect the United States to get involved, regardless of whether the situation directly impacts U.S. national security. What happens, for example, if the Sudanese government decides to utilize chemical weapons in the Darfur region again? Would America’s friends, allies, and partners dial up the White House, the Pentagon, and the State Department and expect the United States to ride to the rescue in a remote part of Africa? What if investigators confirm that the Turkish military did in fact use chemical substances during its assault in the northern Syrian city of Afrin? Would it be incumbent upon Washington to wage a military campaign against Turkey, a NATO member-state that has permitted the United States to stage bombing runs against ISIS from Incirlik? When does it stop?

If the National Security Council staff wishes to serve the president well, it would put all of these questions on the agenda. Those urging immediate U.S. military action will likely find such a debate an excuse to do nothing. That however, couldn’t be further from the truth—working all aspects of the problem across the inter-agency is how the U.S. foreign-policy apparatus should run.