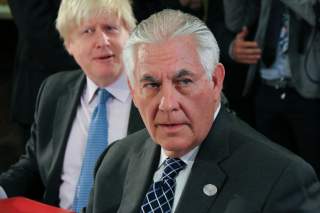 In his less than ten weeks on the job as secretary of state, Rex Tillerson has found himself subjected to almost daily criticism. Vladimir Putin initially refusing to meet with him. In the end, the two men did meet, but made little headway. During a meeting with European foreign ministers, he wondered aloud, “Why should U.S. taxpayers be interested in Ukraine?” A week earlier, his terse, twenty-three-word statement following another North Korea missile test earlier this week reportedly left people “baffled.” His uncertain and infrequent interactions with State Department personnel, explains a recent Washington Post profile, have “created growing bewilderment among foreign officials who are struggling to understand where the United States stands on key issues.”

But if U.S. foreign policy seems directionless, much of the blame for that falls on the White House. After all, it was Donald Trump, not Rex Tillerson, who reversed course on everything from the One China policy to U.S. involvement in the Syrian Civil War.

For example, in September 2013, Trump urged President Obama via Twitter not to attack Syria, and said during the campaign that forcing Syria’s Bashar al-Assad from power was not a high priority. But the president changed his mind after the chemical-weapons attack in Khan Sheikhoun, and seems prepared to do more.

There are others in the administration who have demonstrated a similar propensity for abandoning their previous positions on important foreign-policy issues. UN ambassador Nikki Haley hinted that the United States was prepared to take other unilateral military action against the Syrian government. But at a news conference just a week earlier, Haley explained that the Trump administration would not focus “on Assad the way that the previous administration did.”

One could speculate that Rex Tillerson has been uncharacteristically tight-lipped on issues that now fall under his purview because he recognizes that it is better to speak less and listen more when transitioning into an unfamiliar role. After all, when he does open his mouth, critics are quick to jump down his throat.

There are other equally plausible explanations, however. If Secretary Tillerson does take a firm stand on a major foreign-policy issue, he can’t be confident that President Trump has his back. And months or even years of careful diplomacy can be undone by an awkwardly worded tweet.

More substantively, the White House has blocked Tillerson’s efforts to fill staff vacancies, and some are openly speculating that the staff shortages explain the many apparent gaffes. Hundreds of experts who served in past Republican administrations have been effectively blackballed from joining the Trump team, because they either signed #NeverTrump letters or said unflattering things about Donald Trump during the course of the campaign. For example, the deputy secretary of state position remains unfilled, after President Trump reportedly vetoed Tillerson’s first choice, Elliott Abrams. As the Huffington Post noted, nearly half of the leadership positions on the State Department’s organizational chart are either “vacant or filled by temporary acting officials.”

The Trump administration may be planning to leave many of these positions open. President Trump’s first budget submission to Congress proposed to cut the State Department’s funding by nearly 29 percent, the clearest sign yet that he doesn’t particularly value the work of the nation’s diplomats and foreign policy experts. Members of Congress, such as Rep. Eliot Engel, the top Democrat on the House Foreign Affairs Committee, are disappointed that Tillerson seems unwilling to fight such cuts. On the other side of the political aisle, many Republicans declared that Trump’s budget was dead on arrival.

In other words, President Trump has effectively compelled Secretary Tillerson to scorn the work of the agency that he leads, without any reasonable expectation that the reductions would ever take effect.

In such an environment it is no wonder, as the Washington Post reported, that “career employees at State . . . swap paranoid stories about Tillerson that often turn out to be untrue.” How long he persists within such an environment, and in a job that he never wanted, is an open question.

And if, five or ten years hence, people look back on the Trump administration’s foreign policy as a failure, they might not even remember Rex Tillerson’s role in shaping it. After all, so far at least, he hasn’t.