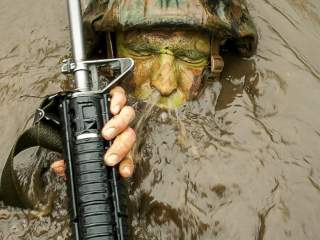 In recent weeks, there’s been a steady drumbeat in the media of calls to increase defense spending. In newspapers, TV and radio, this chorus contends that a shrinking military budget is putting U.S. national security at risk. Repeal the Budget Control Act and boost Pentagon spending, they warn, or suffer the consequences of a less secure nation. The time has come to expose the fact these claims are without merit and instead shine a light on the real cause of our dwindling military capabilities.

The American military’s shrinking capabilities have very little to do with money. Rather, they are the result of internal mismanagement. The only way to strengthen our national security is not to spend more money, but rather to reform the way the Department of Defense does business.

It boggles the mind that the DoD cannot account for the hundreds of billions of dollars a year that it spends. A full twenty-six years after a federal law was passed requiring all parts of the federal government to provide Congress with an audit of its spending, there remains only a single government agency that has not complied: the Department of Defense. Even after being publicly rebuked by the Senate in 2013 for this failure—and wasting billions of dollars on failed auditing software—the Pentagon remains noncompliant. Although it’s a major problem that we don’t know how the Pentagon spends its money, an examination of the known expenses is even more alarming.

Look no further than the $500 million spent to train Syrian rebels to fight ISIS. That program was scrapped after putting only a handful of trainees on the ground. Or the $468 million spent on planes for the Afghan Air Force that we were forced to destroy because the Afghans could not fly or maintain them.

Even worse, consider the $20 billion spent by the Army on its Future Combat System, which was supposed to develop the next generation of armored vehicles, but produced exactly zero new pieces of equipment. The weakened state of today’s military has not been caused by insufficient appropriations, but by sometimes breathtaking mismanagement within the Department of Defense.

The time has come to genuinely reform the Pentagon in ways that are commensurate with the caliber of the mismanagement. There are many changes that need to be made but three fundamental changes stand out as being necessary to enable our military to successfully navigate an uncertain global future.

First, is institutional reform. The DoD must become “joint” in more than name alone. That means the mindset and priorities should shift away from the individual services and towards our national military capabilities. Ground forces (Army and Marines), for example, should be integrated closely with air forces (Navy, Marines, and Air Force) in capability and training. Unnecessary and redundant capabilities should be eliminated and single-service headquarters should be scrapped or reduced in favor of fewer and more efficient joint-force headquarters.

Second, the Pentagon needs organizational reform. Much of the military is still organized as it was during the Second World War. The US Army, for example, still has nearly the same Corps-Division-Brigade structure it had in the late 1930s, despite the fact that modern and likely-future battlefields have rendered these formations obsolete. The future lies in a fusion of new and emerging technologies with new fighting units centered around smaller, more lethal formations.

Finally, the U.S. military needs intellectual reform. If the leadership doesn’t change its way of thinking, none of the other reforms will take hold. Prior to the onset of World War II, then-Army Chief of Staff General George Marshall recognized the stale nature of the Army’s senior leaders and sacked hundreds of colonels and general officers, elevating a new generation of younger and more progressive leaders. The aggressive and innovative spirit of those new leaders were instrumental in helping the Allies win the war.

It is troubling that today’s senior uniformed leaders have become comfortable with the status quo of acquisition and strategic mismanagement. Rarely are any held to account for such failures. What is needed now is a president and Congress willing to support intellectual reform within the Pentagon’s leadership. There is no shortage of outstanding young officers in all the services who are willing to take prudent risks, recognize that the status quo is killing military effectiveness, and have the intellectual capacity and courage to make necessary changes.

Failure to make these reforms now is not an option. America is losing its qualitative military edge. But the solution to that loss is not to throw more money at the Pentagon - it’s to make the Pentagon a better steward of the trillions of dollars it already has. Failure to require reform before any increase in defense spending and Congress and the White House will likely only succeed at producing a more expensive version of the declining military we have today.